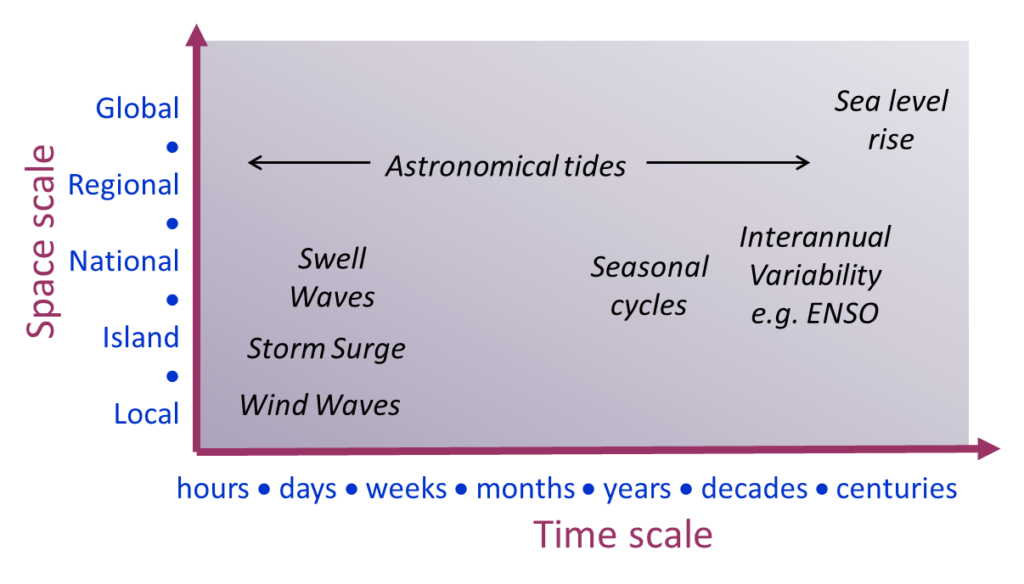 Tides occur as a result of gravitational forces from the Moon and the Sun that produce changes in sea level, mostly on daily or half-daily time scales known as diurnal and semi-diurnal respectively. In the deep ocean the tidal range is typically a few tens of centimetres, but in coastal regions it can be up to several metres. 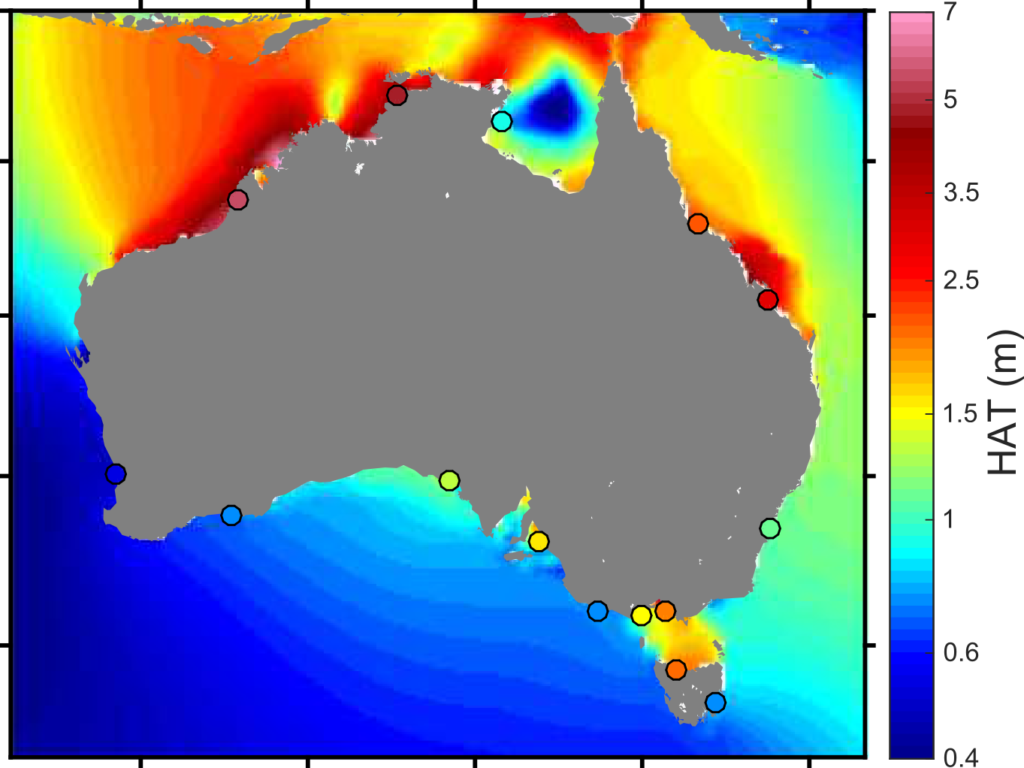 Astronomical tides can vary on other timescales too, including the fortnightly spring and neap tides, seasonal and interannual changes, and modulation of the tidal amplitude over the 18.6 year lunar cycle.

Storm surges are the major cause of extreme sea levels and devastating coastal impacts along many coastlines around the world, which can result in significant human tolls and economic losses. For example, the storm surge from Typhoon Nargis in Myanmar in 2008 killed 138,000 people (IPCC, 2012), and following Hurricane Katrina in 2005 the US Federal government flood damage payouts totalled around $16.1 billion.

Storm surges are gravity waves arising from the inverse barometer effect and wind stress. The inverse barometer effect elevates sea levels approximately 1 cm for every 1 hPa fall in atmospheric pressure relative to surrounding conditions. Wind stress induces currents over shallow water. Wind stress directed onshore leads to an increase in sea levels (i.e. “wind setup”), particularly within semi-enclosed embayments or under severe wind forcing such as produced by tropical cyclones. In mid-latitudes, wind-induced coast-parallel currents which persist for a day or more, undergo Coriolis deflection. In the northern hemisphere coastal currents flowing with the coast to the right (left) will become elevated (depressed) at the coast and this is referred to as “current setup” (“setdown”). In the southern hemisphere, coastal currents flowing with the coast to the left (right) will result in elevated (depressed) coastal sea levels.

The main dynamic processes leading to increased sea levels at the coast due to the wind.

The storm conditions that create storm surges will also create large wind-generated waves. In some situations and locations, such as coastlines and islands with little or no continental shelf, waves may produce a greater impact than the storm surge in a severe storm. Unlike storm surges which are generated by storm systems in the immediate vicinity, the sources of waves include not only local weather conditions but also distant storms. This is because waves can travel long distances in deep water from their point of origin with little loss of energy. Such waves are called swell.

Waves steepen and break as they encounter shallow coastal waters. The wave breaking leads to loss of energy and loss of wave height. Therefore, the further offshore these conditions are encountered the smaller the waves will be that finally reach the shore. Conversely, deeper waters lying adjacent to coastlines enable waves to travel closer in to shore before finally breaking. These two situations are illustrated below. Paradoxically, the conditions that ensure that waves lose energy before reaching the shore are the same conditions that favour larger storm surges. As the waves move progressively into shallower water, they break and lose energy. Some of this energy is transferred into a shoreward momentum flux which acts to raise the mean sea level slightly close into shore. This sea level increase is called wave setup.

Coastal geometry influences the severity of storm surges experienced at the coast. Storm surges are amplified by wide continental shelves. This is because the currents caused by the wind are slowed down by the friction created by the ocean floor over the shallower shelf region and this in turn causes the water depth to increase. Thus on shelf coastlines, storm surges dominate extreme sea level events. However around reefs where there is no coastal shelf, there is little change in sea level due to storm surges, but waves play a dominant role in extreme sea level events, as the fringing reef causes wave amplitude to suddenly increase as described above. 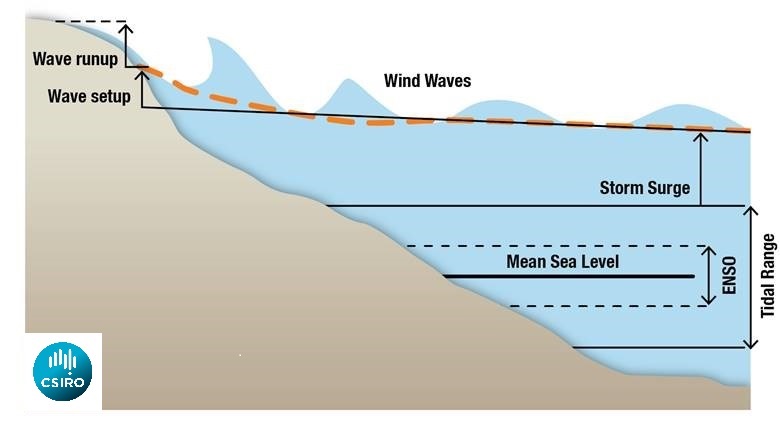 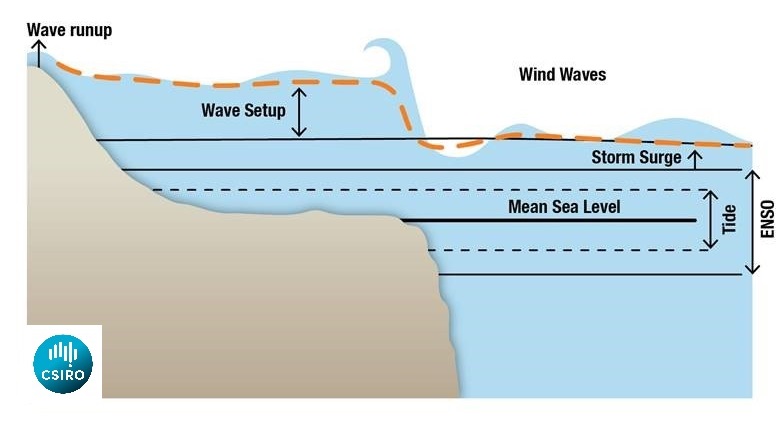 Other topographic features such as headlands can also either amplify or protect a coastal region from storm surge depending on the prevailing wind direction in relation to the headland.

Some earthquakes cause a very rapid vertical movement of the ocean floor and in these cases generate tsunamis (tidal waves), such as the 2004 Boxing Day Tsunami in the Indian Ocean. Tsunamis travel at speeds of about 200 metres per second in the deep ocean (about 700 kilometres per hour), taking several hours to cross an ocean basin allowing time for tsunamis warnings to be issued. Tsunami warning systems are being strengthened since the 2004 Boxing Day Tsunami.