Slope deformation radar monitors are now widely used in open cut coal mining for monitoring highwall and low wall deformations. Their introduction has facilitated better management of risk associated with slope failure during mining and therefore protection of personnel and equipment. However, a well-recognised problem is that radar monitors only measure deformation directed towards the detector (line of sight bias). This bias can lead to misinterpretation of deformation size, rate and failure mechanism, and therefore miscalculation of failure volume, which can significantly impact safety and productivity.

Current methods to compensate for the bias make potentially inaccurate assumptions about the deformation vector relative to the wall/slope orientation. Alternatively, using multiple slope monitors to observe the same region of highwall or low wall can address this problem but this is rarely done due to the expense associated with deploying multiple monitors for the one zone. Often, only a single monitor is available at a given site.

ACARP project C27046 has investigated the feasibility of a low cost solution based on CSIRO research on a patent-pending method. By integrating a computer vision system with an existing slope monitor, high precision tracking of features in the field of view can be performed. Combined with assumptions on the deformation characteristics, the true deformation vector can be estimated. Because the proposed system uses the existing radar measurements, a camera and software, the cost of this system is expected to be extremely low when compared to the purchase or rental costs of the monitoring systems.

This project field tested and quantified the performance of a prototype system. It assessed the implementation options (usage of cameras currently installed with radar monitors versus retro-fitting of higher performing cameras). It has been demonstrated that the new generation of cameras being deployed with radars are capable to support the proposed method. Experiments at Site A demonstrated the efficacy of the approach for monitoring both oblique and transversely oriented failures in a low wall dump. Even using post-processed and compressed imagery, the computer vision algorithms and sensor fusion technique clearly demonstrated 3D vector estimation which was consistent with the surface type failure being observed.
Site B focussed on the use of the technique using raw (unprocessed), high resolution imagery to obliquely monitor a deeper seated multi-bench failure, in a hard-rock environment. The method clearly detected deformation perpendicular to the radar with deformations significantly greater than those measured along the line-of-sight. The derived 3D deformation vectors were consistent with both an understanding of the failure mechanism as well as previous measurements undertaken using a dual-radar system.
Through fusion of vision and radar data, it has been also demonstrated that at least millimetre precision at a range of around 500m can be achieved but it is expected much greater ranges can be supported with suitably chosen optics and suitable conditions. 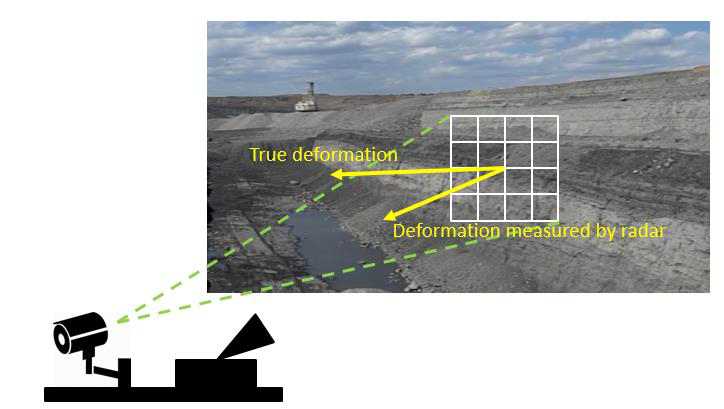 The approach: computer vision system tracks deformation of the wall in the field of view and, combined with radar data, estimates the true deformation vector