Damage to the tops of coal seams caused by incorrect blast stand-off distances is a serious issue to the Australian coal industry costing the equivalent of about one open cut mine for every 10 operating mines in coal lost. To date, no effective and economically-sound techniques are available to map and characterise coal seam structures in the open cut environment. This ACARP funded project will use conductively-guided borehole radar (BHR) waves for real-time prediction of coal top during blast hole drilling. The method uses a conventional borehole radar (BHR) with a dipole antenna, which can image sideways around the borehole, electrically coupled to a conductive wire or steel drill-rod to induce a guided wave along the axial drill-rod. The drill-rod ahead of the BHR becomes part of the radiating antenna. The guided wave travels to the end of the drill-bit when some energy is reflected back and the remainder radiates from the drill bit. The radiated energy will be reflected by geological discontinuities such as the top of coal, and recorded by the BHR. This project will investigate the practicality of real-time prediction of coal top using this guided BHR wave imaging technique. 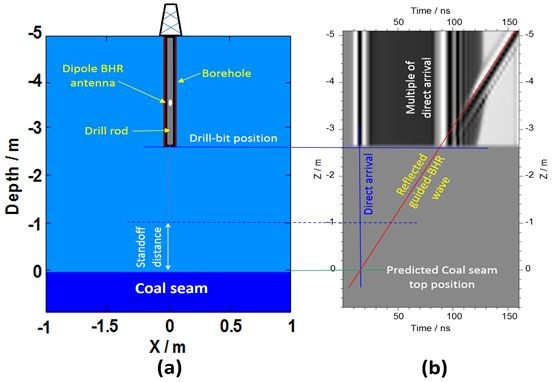