The following table summarizes some of these issues:

A more detailed version of the introductory material here is available at ESA’s radar altimeter tutorial.

Use of satellite radar altimeters to measure global sea surface height (SSH) has come a long way since the brief Seasat mission of 1978. Early missions measured SSH with an accuracy of tens of metres. More recent high quality satellite altimeter missions such as TOPEX/Poseidon (launched August 1992) and Jason-1 (launched December 2001) measure SSH to an accuracy of a few centimetres. These satellites were specifically designed to measure SSH to the highest possible accuracy.

The essential parts of a satellite altimeter measuring system are:

The picture below illustrates some of this. 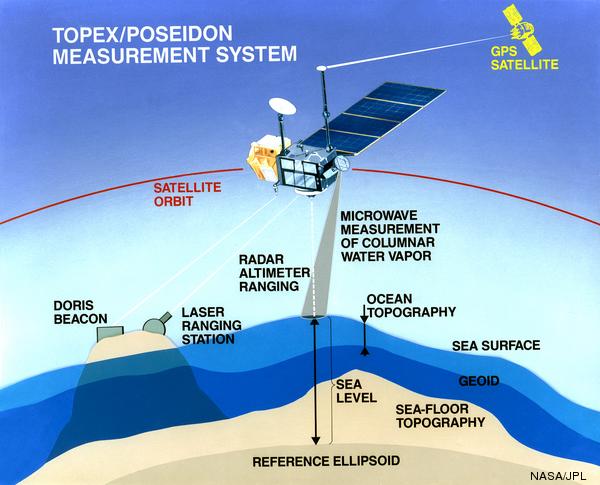 The Earth is not spherical and both the gravity field and the (related) geoid (the equipotential surface) vary over the surface of the Earth. Oceanographic signals are small perturbations (typically less than a metre) on the geoid signal (which has a range of about 200 metres). Some early altimeter missions, such as the GEOSAT Geodetic Mission (see table below) were initially launched (by the US Navy) to measure the marine geoid, which then lead to estimates of the marine gravity field.

High precision satellite altimetry needs high quality gravity fields to estimate the perturbations in the satellite’s orbits caused by the spatial changes in the gravity field. This is at the stage now where the changes in mass (and hence gravity) caused by movement of the oceans by tides need to be included in the gravity models to get the best possible altimeter orbits.

Many Earth-observing satellites are in fairly low orbit (up to about 800 kilometres above the Earth’s surface), but TOPEX/Poseidon and Jason-1 used higher orbits (about 1340 kilometres) as this helped with orbit determination because the gravity field is a bit smoother at this higher altitude. Also there is less atmospheric drag on the satellite at this height. The payback for this is that the missions are more expensive because of the higher launch costs and the satellites have to work in a harsher radiation environment as there is less of the Earth’s atmosphere to protect them.

Notes on the table: 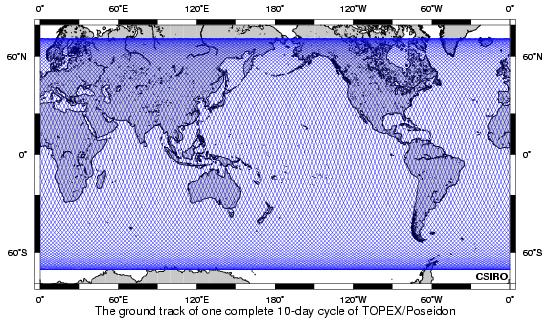 Plot of the TOPEX/Poseidon ground track 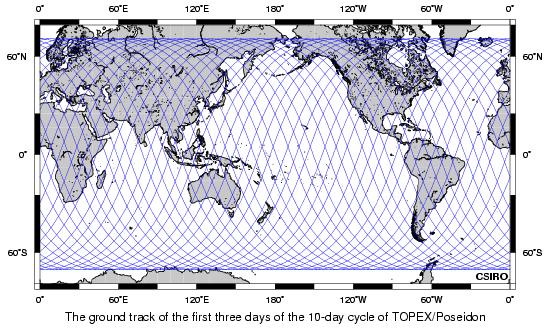 Plot of the first three days of TOPEX/Poseidon ground track

It may be easier to see what is happening from this subset (the first three days) of the the 10-day cycle. 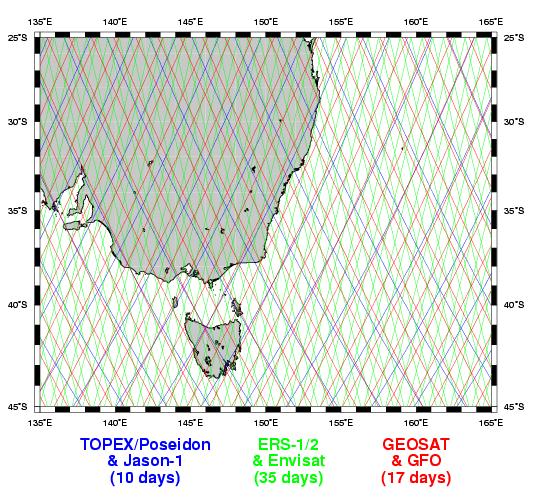 Plot of all ground tracks in the SE Australian region

This plot shows the tracks of three different satellites over the south-eastern part of Australia.

Some facts about the TOPEX/Poseidon (and Jason-1) orbit

Please note that we have upgraded our processing of the earlier missions (TOPEX/Poseidon and Jason-1) to what is known as ‘GDR-D’ standard.

The most important difference is that orbits for all missions are now in ITRF2008 (Altamimi et al, 2008). Orbits for TOPEX/Poseidon and Jason-1 are the GSFC std1204 orbits (Lemoine et al, 2010). The ITRF2008 orbits that are supplied with the data are used for OSTM/Jason-2.

The measurement of long-term changes in sea level from tide gauges involves the following for any one site:

Fortunately for us most of this work has been done at the Permanent Service for Mean Sea Level (PSMSL). The University of Hawaii also maintains an archive of tide gauge data. For our work we normally use the monthly average data as we are mainly interested in the long-term behaviour, but higher frequency data is needed for some applications. Some high frequency data is available from the PSMSL and UHSLC, but much of it is in national archives, such as Australia’s National Tidal Centre (NTC). A combined data product of high frequency tide gauge data is available through the Global Extreme Sea Level Analysis (GESLA) project.

Tide gauge-derived SSH records are subject to contamination by vertical movement, which can take various forms:

In recent years a lot of effort has been going into installing GPS receivers at, or very close to, high quality tide gauges to try to estimate this vertical movement directly and then correct for it. Some of the GPS records are now able to provide useful estimates of this. See for example GLOSS and TIGA.

Our estimates of sea level before the earliest tide gauge records (17th century) are dependent on what are referred to as “paleo” indicators. These are indicators (usually natural, but sometimes man-made) whose age, and whose height, relative to modern-day sea level can be measured accurately enough to give worthwhile measurements of past sea level. While these measurements are not nearly as accurate as modern instrumental techniques they can still give useful restraints on sea level histories due to the long time period.

Some of the natural markers are:

Some of the man-made markers are: