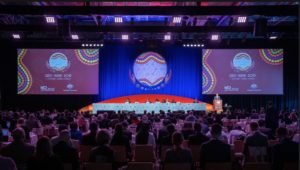 GEO Week 2019: the annual GEO Week, and 4-yearly Ministerial Summit, is one of the world’s largest gatherings of EO practitioners and policy makers.

The Centre for Earth Observation maintains an active presence and leadership role on key international earth observation coordination bodies on behalf of CSIRO and Australia.

Australia’s representation in both key international fora is a ‘team effort’ – CSIRO is lead for Australia in CEOS; Geoscience Australia (GA)  in GEO. Both organisations, alongside other domestic partners like the Bureau of Meteorology (BoM) and the Australia Space Agency (ASA), work closely together to increase Australia’s participation and impacts on the international stage (CEOS, GEO), foster the Australian EO community in these organisations, support GEO’s objectives (open data policy) generally through advocacy of EO and the work of GEO.

The Committee on Earth Observation Satellites (CEOS) is an international organisation involving 60 agencies operating 156 satellites. Its mission is to ensure international coordination of civil space-based EO programs, and advocacy of the free and open exchange of data, to optimise societal benefit and inform decision making for securing a prosperous and sustainable future for humankind.

CEOS is an international body which coordinates a range of space-based EO capabilities and activities, with participants that develop, operate and support civil EO satellites. The work of CEOS ranges from the development of detailed technical standards for data product exchange, through to the establishment of high-level inter-agency agreements on common data policies for different applications areas.

CSIRO, through the Centre for EO, is an active member of CEOS and leads Australia’s engagement in this forum, that includes the widest global membership of civilian government EO satellite agencies.

CSIRO became SIT (Strategic Implementation Team) Chair during 2020 and 2021, together with Geoscience Australia (GA) this time which strengthened our domestic collaboration on EO too. SIT is the machinery of CEOS and provides ongoing strategic guidance on the direction, progress, and status of agreed implementation activities in relation to the established priorities, commitments, and partnerships of the CEOS organisation.

Attendees of the 33rd CEOS Plenary 2019 in Hanoi, Vietnam – last one held face-to-face

Despite having to run all our 4 meetings virtually in the end due to the global health crisis, we managed to successfully address our 3 priorities:

See more information about our first SIT meeting (originally planned in Hobart), and other SIT-36 and Technical Workshops as per the last one in September 2020.

CSIRO has recently been very active in CEOS with other contributions (leadership and technical):

The Group on Earth Observations (GEO) is an intergovernmental organisation working to improve the availability, access and use of EO for the benefit of society. GEO works to actively improve and coordinate global EO systems and promote broad, open data sharing. GEO’s global priorities include supporting the UN 2030 Agenda for Sustainable Development, the Paris Climate Agreement, and the Sendai Framework for Disaster Risk Reduction.

GEO consists of 105 member countries and 127 participating organisations. CSIRO is a member of the Australian government delegation together with Geoscience Australia and the Bureau of Meteorology. Geoscience Australia currently leads Australia’s engagement in this forum and is GEO Executive Committee member for 2018. 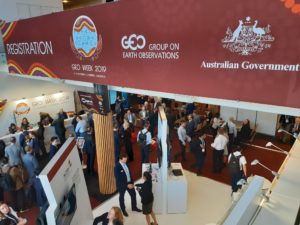 The theme for GEO Week 2019 and Ministerial Summit was to bolster investment and support for EO.

CSIRO’s roles has included or is till currently active in: 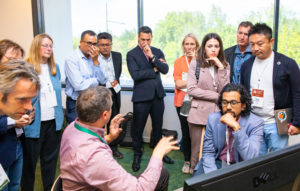 Attendees interacting with the demonstrations from product providers at the EO 2.0 Workshop held during GEO Week 2019

The Centre manages several bilateral agreements which have been signed (or in discussion) with space agencies around the world, to name just a few:

Some agreements cover all EO activities, when others are dedicated to NovaSAR and other SAR data or technology exchange.

The Centre often hosts international delegations and contributes to several international workshops, meetings and events. These provide opportunities for side-meetings, signing, reinforcing partnerships, discussing opportunities and forging collaborations. Our geographic focus is on the Asia Pacific region. Recent and current initiatives include: 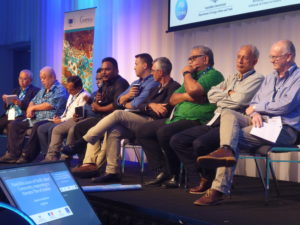 Our work in space applications is international in nature, including

The AquaWatch Australia mission that CSIRO is leading with its foundational partner SmartSat CRC and other domestic partners is already engaging with international stakeholders to build partnerships at different levels:

Maintaining satellite calibration and validation infrastructure, as well as boosting the development of the CSIRO’s EASI are also heavily dependent on and impact our international collaborations.