A French delegation led by the French Minister for Higher Education, Research and Innovation, Frederique Vidal, visited Australia 26-29 February 2019 to attend the JSTM (French-Australian Joint Science and Technology Meeting) held in Canberra, and to strengthen the scientific collaboration between France and Australia with a number of agreements signed between the two countries.

The delegation, comprising key research institute leaders including the French Space Agency CNES (Centre National d’Etudes Spatiales) President Jean-Yves Le Gall, also attended the Avalon Airshow in Melbourne. It was an excellent opportunity for the CSIRO Centre for Earth Observation and CNES to inaugurate a new partnership with the signing of a Letter of Intent around Earth observation collaborations. This agreement, following the Memorandum of Understanding for strategic cooperation on space between CNES and the Australian Space Agency (ASA) signed in September 2018, intends to further promote the joint collaborations in Earth observation applications to address, among others, complex global challenges such as  sustainable development issues and climate adaptation/mitigation. Specific collaborations with CNES in the South Pacific region will be further developed.

CSIRO and CNES are already working together on scientific ballooning, and the two organisations look forward to reinforcing the scientific French-Australian partnership in several applications of Earth observation to provide reliable, accurate and timely data to better inform policy decisions and tackle human and environmental challenges. 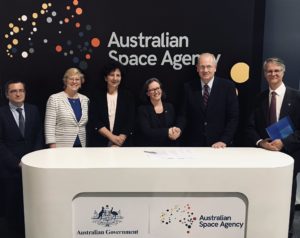