This User Guide provides a description of the NovaSAR-1 specifications, modes and products. It also gives information on the calibration, orbit characteristics and compatible software.

Use the following links to navigate your way around the User Guide:

NovaSAR-1 is a joint technology demonstration initiative of SSTL (UK) and Airbus DS (former EADS Astrium Ltd, Stevenage, UK), funded by the UK Government via the UKSA (UK Space Agency). The overall objective is to make SAR (Synthetic Aperture RADAR) observation missions more affordable to a customer base and to open up new applications in the S-band microwave region of the electromagnetic spectrum.

NovaSAR-1 is a much smaller version of traditional spaceborne SAR sensors, with a mass of 450 kg. It was developed to be low-cost whilst still providing medium resolution data with wide coverage. This is achieved by:

The SAR payload operates in the S-band microwave frequency (3.2 GHz), corresponding to a 9.4 cm wavelength and can operate in four operational modes. The spacecraft is also equipped with a secondary Automatic Identification System (AIS) payload produced by Honeywell Aerospace that can be combined with NovaSAR-1’s maritime surveillance mode for ship identification.

Watch this video from SSTL to learn more about NovaSAR-1

What are the benefits of RADAR imaging?

Radio Detection and Ranging (RADAR) is an active imaging technology in which pulses of microwave energy are emitted from an antenna and the resulting reflections are used to create images. Some advantages over optical imaging include:

What is Synthetic Aperture RADAR?

Synthetic Aperture RADAR (SAR) uses the different locations of the sensor, as it moves along the flight path, to simulate a large antenna from a smaller one. This enables SAR sensors to provide high-resolution imagery that does not degrade with distance like traditional RADAR systems with large antennas.

For detailed information on SAR visit our Resources page

The NovaSAR-1 satellite has the following mission characteristics:

The NovaSAR-1 SAR payload uses the S-Band frequency range, which is less common in spaceborne SAR systems than the X-, C-or L-bands.

S-Band SAR imaging has already proven utility onboard the Russian Kondor-E1 (2013) and Almaz-1 (1991) satellites and the Chinese HJ-1C (2012) satellite. It is the selection of S-Band that makes NovaSAR-1 possible, as the efficiency of the new Gallium Nitride amplifier technology offers higher conversion of energy to radio-frequency and produces far less surplus heat than those amplifiers currently used for X-, C- and L-Band satellites.

Some differences that NovaSAR-1 S-band imagery may offer compared to other SAR frequencies:

NovaSAR-1 is the first civilian SAR to have an AIS receiver on board at the same time. AIS is a Very High Frequency (VHF) system, designed for the automated location and tracking of vessels. AIS transceivers are fitted on international voyaging ships with a gross tonnage greater than 300 tons and all passenger ships. Messages report a minimum of:

These messages are transmitted at least every 30 seconds for ships in motion (up to every 2 seconds for fast-moving or manoeuvring vessels) and no less than every 3 minutes for ships at anchor. The AIS receiver onboard the NovaSAR-1 platform can be used to collect data just before and after the SAR imagery of the same area, providing additional information on the identification of detected ships and highlight non-AIS transmitting vessels.

The AIS receivers are the next generation receiver from Honeywell and are a Direct Radio Frequency Sampling (DRFS) type with support for two antenna interfaces sampled by high-performance A/D converters and clocked by a low-noise https://aerospace.honeywell.com/high-stability clock. The receiver supports 6 AIS channels that include:

Each AIS receiver has 2 orthogonally mounted antennas that provide near omnidirectional coverage that will provide instantaneous coverage of approximately 20 million km².

The AIS receivers will be operated in a cold redundant manner. Both AIS receivers’ output data in CCSDS packets that contain AIS packets as defined by the ITU-R-M.1371 standard. They will provide de-stuffed AIS packets with the removal of the preamble, start flag, checksum, end flag and buffer. As part of the standard operation of the receiver, any packets without a valid checksum are discarded.

NovaSAR-1 offers a range of imaging modes with a variety of swath widths and imaging resolutions that can be chosen to best suit the needs of the user. All modes can be operated in either right-looking or left-looking antenna pointing directions and from an ascending (South to North) or descending (North to South) orbit. 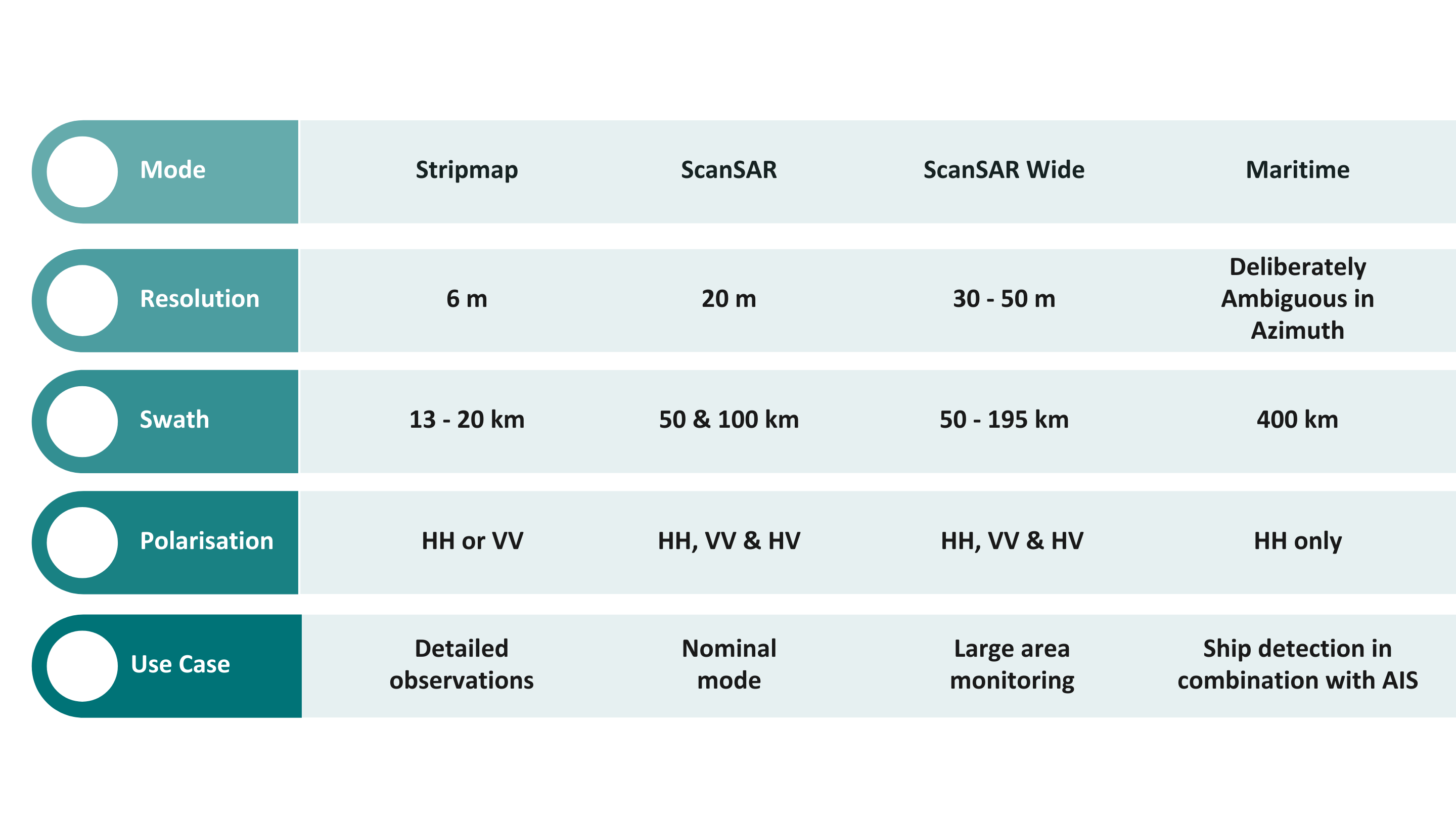 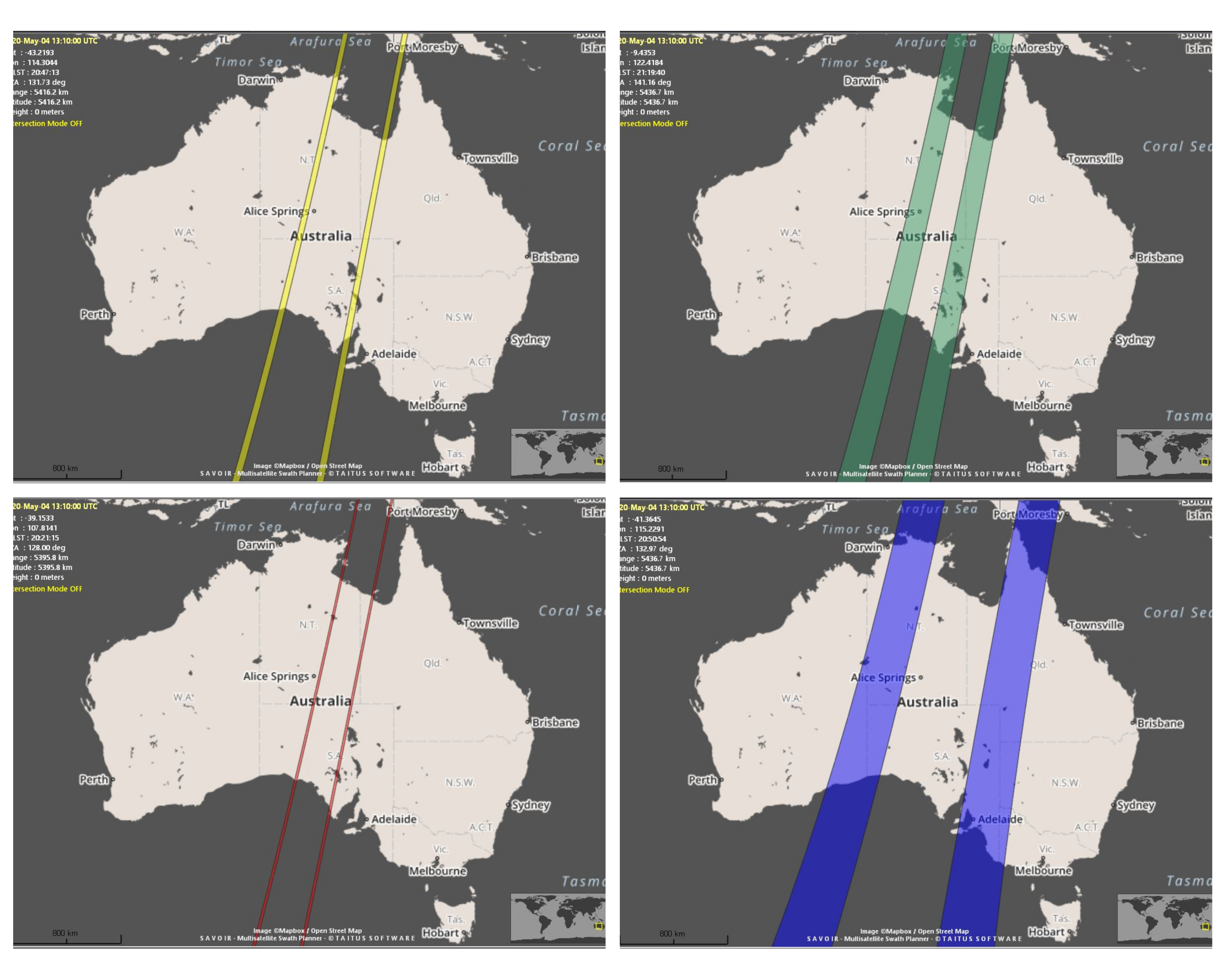 Within each of the baseline modes, except Maritime, there are a variety of mode options that vary according to ground range resolution, polarisation, incidence angles, swath width and the number of looks.

The modes we anticipate will be the most widely used, and that are listed as options in the OPAL Acquisition table, are defined in the table below:

There are further modes on offer that are not listed as options in the OPAL Acquisition table. To select these modes in OPAL, choose ‘other’ from the dropdown menu and specify in the ‘Other imaging constraints’ box. These modes are:

SAR systems can control the polarisation of the microwaves that are transmitted and received by the sensor. Features on the ground appear differently depending on which transmit and receive polarisations are used.

The NovaSAR-1 payload transmits both Horizontal (H) and Vertical (V) polarisations and can be operated in any of the four standard single polarimetric configurations:

The NovaSAR-1 payload receives one polarisation (H or V) at a time and switches between them for multi-polar modes. The instrument is therefore capable of providing incoherent, i.e. not exactly simultaneously, dual and tri polarisation. This alternating polarisation was also utilised on ESA’s Envisat.

The ScanSAR and ScanSAR Wide modes have a variety of polarisations available although VH is not currently included in any modes. Stripmap is currently available in single polarisation HH or VV only and Maritime mode only functions in HH.

NovaSAR-1 can image in both ascending and descending orbits. 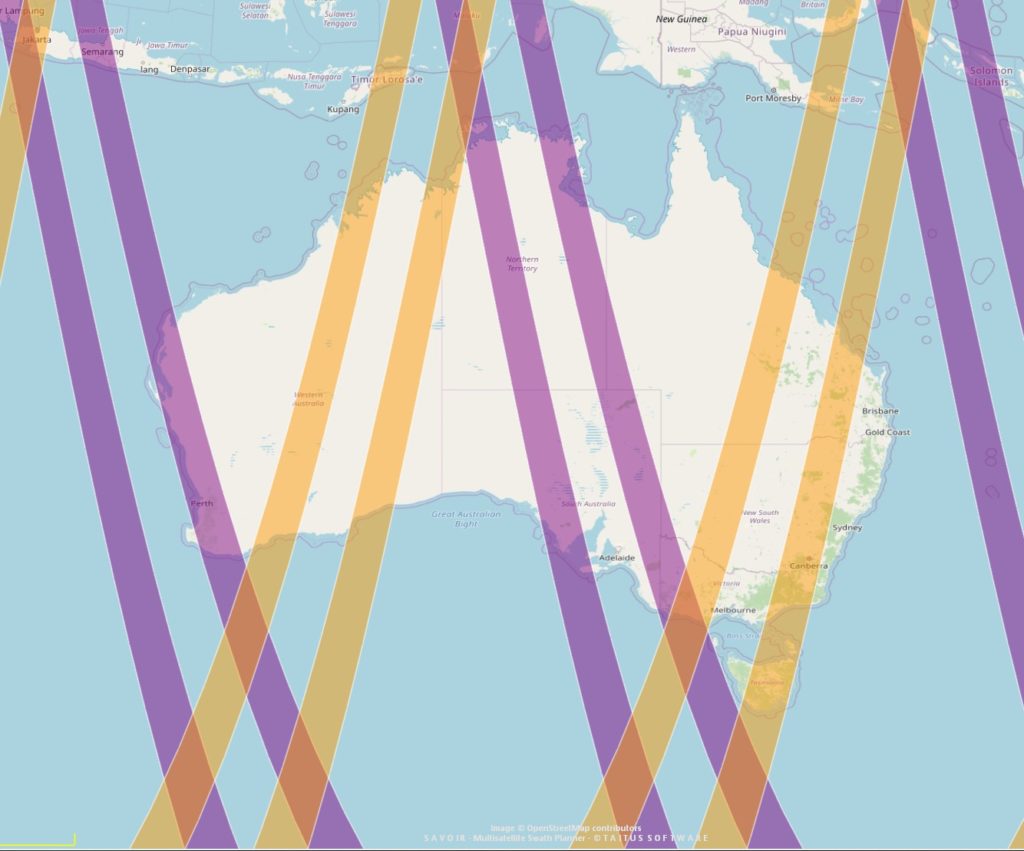 NovaSAR-1 does not image at Nadir but can image with either left or right pointing of the antenna (also referred to as the look direction). 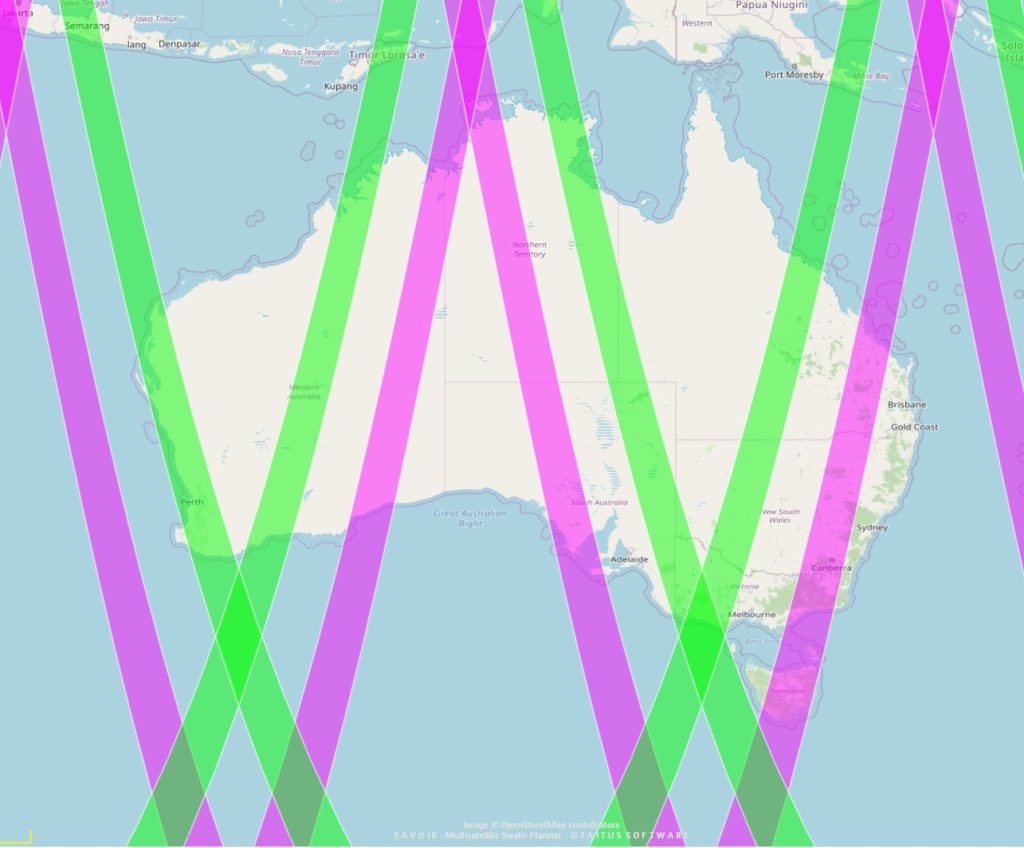 NovaSAR-1 operates in a sun-synchronous orbit at 580km with an LTAN (Local Time of the Ascending Node) of 10:30. The satellite ground track can be seen below. Each orbit shifts to the west by approximately 24.3° of longitude at the equator. There are 15 revolutions a day resulting in 3-4 passes day over Australia.

The repeat cycle (for the same mode and look direction) is approximately 16 days. However, NovaSAR-1 does not operate with a fixed orbit but has a slight drift (described above). This means it does not follow a path/row acquisition strategy like other satellites and therefore acquisition parameters over the same area will vary slightly between acquisitions, as shown below.

Due to the orbital shift, opportunities for interferometric measurements are ad-hoc and limited to archive image pairs with a small enough spatial baseline. There is the potential to control the orbit over a short section of the satellite’s total lifetime to provide a demonstration interferometric capability but this would need agreement from all mission partners.

Level-0 products consist of raw SAR data and are the basis on which all other level products are produced.

Level-0 products are not provided to users but are stored in the CSIRO archives so that they can be used to reprocess any level of product while the data is available.

Level-1 products are provided to users free and open-access without a proprietary period and are available in the following product types: 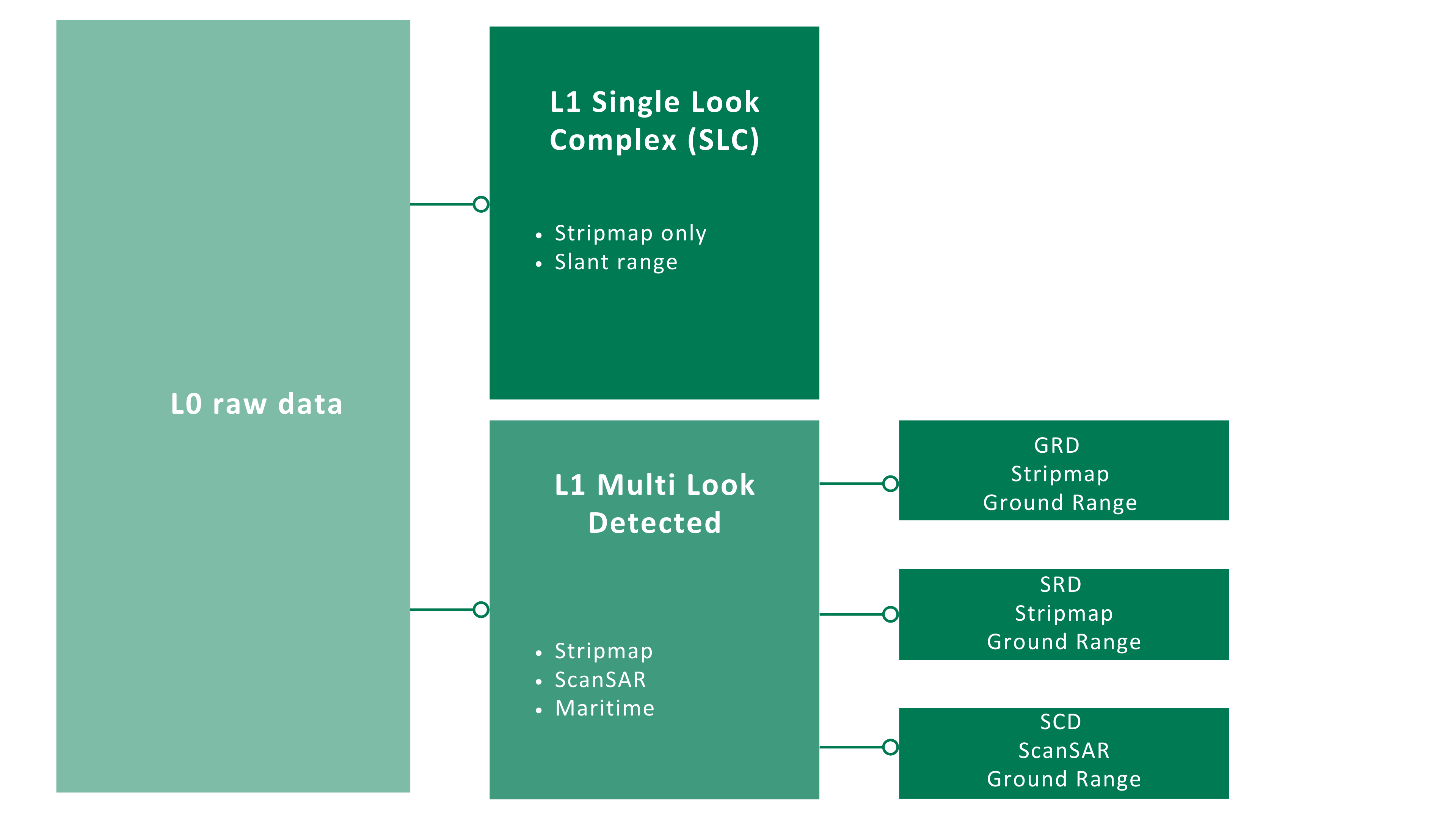 The NovaSAR-1 product directory name is of the form:

NovaSAR-1 products are distributed in a zip folder and consist of:

The Image Product file is in GeoTIFF .tif format and contains the image processed to the resolution specified for the imaging mode. Multiple Image Product Files will be present when:

The Quick-look Image file contains a coarser resolution version of the processed image, always in detected format (ie never complex). The coarser resolution is achieved using an adaptive subdivision process to average neighbouring pixels so that the image size is reduced to around 1K x 1K pixels. It is named QL_image_pol.tif where _pol indicates the polarisation for the Quick-Look image, ie _HH or _HV etc

A full description of the Metadata Parameters can be found here

The Metadata Stylesheet is named Metadata_style.xsl and provides formatting information for the Metadata file to a compatible web browser (eg Internet Explorer). 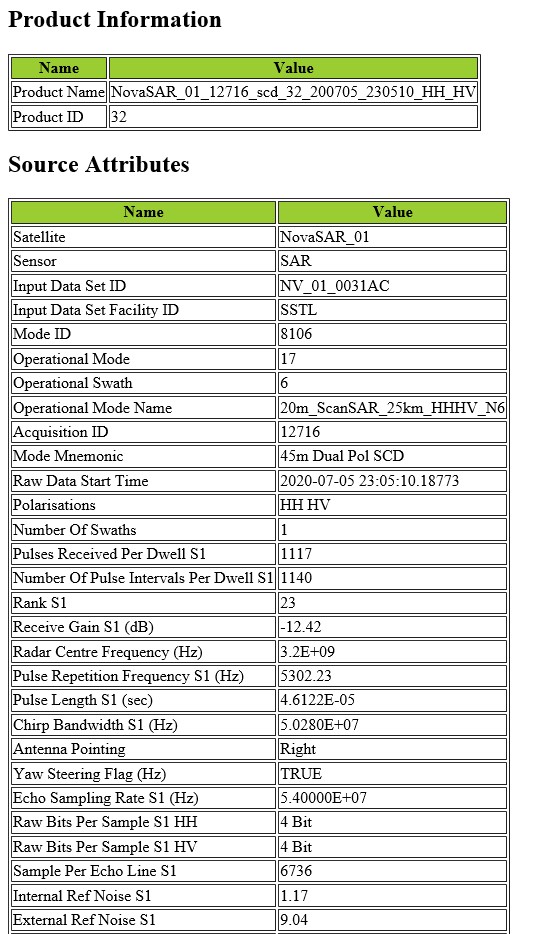 Ambiguities are false targets that appear in images. Azimuth ambiguities are due to aliasing caused by the sampling of the Doppler spectrum at intervals using a pulsed system. Range ambiguities are caused by echoes received from earlier or later pulses arriving back to the antenna at the same time as the desired echo. The ambiguity ratio is the degree to which ambiguities are suppressed. Acceptable ambiguity ratios are of the order of -15dB to -20dB which is achieved by NovaSAR (except in the case of Maritime mode which is designed to be deliberately ambiguous in azimuth in order to maximise the swath).

Speckle is reduced by the use of multi-looking. The full synthetic aperture is split into several sub-apertures in time and/or frequency, each representing an independent ‘look’ of the identical scene.  The incoherent summing of these looks forms an image with reduced speckle and degraded spatial resolution.

Maritime Mode is not intended to be used to generate images. It is a low radar pulse frequency mode that will generate a 2-D dataset with a pattern of ambiguous responses for targets with suitable radar cross-section. The low pulse frequency enables a wider swath than can be achieved with imaging modes at the expense of multiple ambiguous artefacts for each target. It is anticipated that this mode is used for ship detection in the open sea.

NovaSAR-1 Images can use 2 sources of Orbit Data (Metadata tag: OrbitData) which it uses for geolocation. The first choice is the GPS data recorded on the satellite at the time of acquisition, which produces the most accurate results. If the GPS data is not available the TLE data is used which has lower accuracy.

In some cases, the geolocation of an image may be incorrect in the along-track direction (North or South) by around 6.5-7km. This is due to a known issue caused by time rounding and can be rectified by CCEO staff. Please complete this form and we will generate a new version of the image for you.

All our products are produced as single image product files unless they exceed the TIFF format 4 GByte limit. If these files are too large for you to download or analyse, please contact us to discuss manual processing to a more manageable size.

NovaSAR-1 images are given a Calibration Status (Metadata tag: CalibrationStatus) of SUSPECT for one of 2 reasons:

Calibration of NovaSAR-1 was undertaken by SSTL during the spacecraft commissioning and involved assessment of the following features against their expected values:

These measurements will be repeated throughout the mission lifetime to identify any variation in performance.

NovaSAR-1 Data can be opened and processed using the following software:

There is a NovaSAR-1 Product Reader available as a SNAP Extension which can be installed via (Tools->Plugins->Available Plugins).  It can also be manually downloaded here.

However, not all utilities are currently operational for NovaSAR-1 data, e.g. Geometric Terrain Correction, therefore compatibility of the data with this platform is limited at this time. Any further updates will be recorded here. 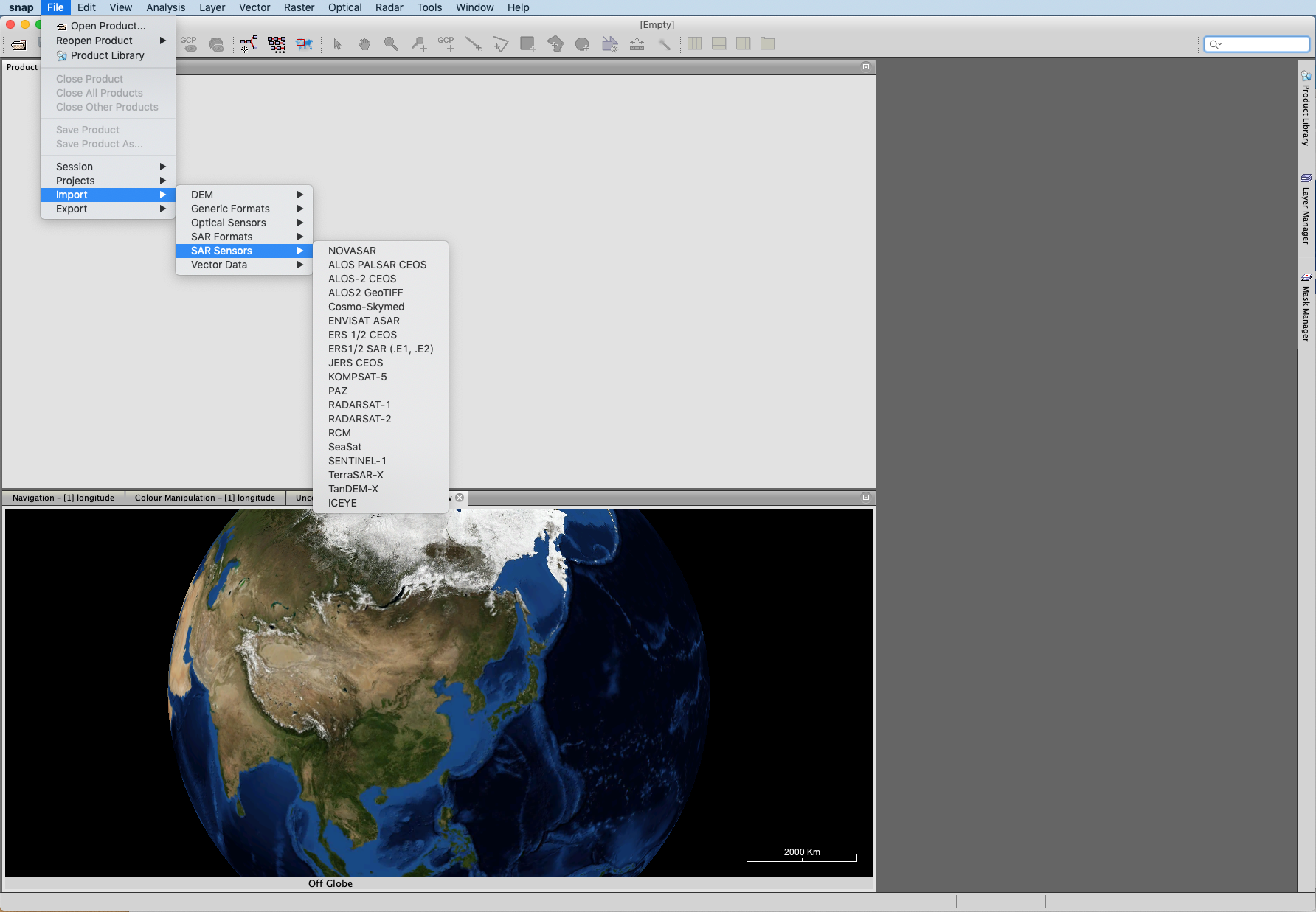