Assessing the condition of, and threats to, finfish and shark biodiversity assets

Fish and shark assemblages are recognised as being particularly vulnerable to fishing pressure, climate change and habitat quality. 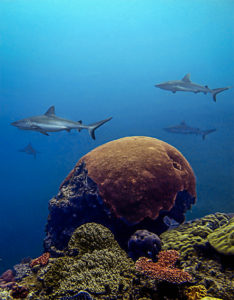 The PMCP fish and shark project

The PMCP fish and sharks project, led by The University of Western Australia’s Marine Ecology Group, has provided context to marine conservation efforts in the Pilbara/Ningaloo area by undertaking the first regional-scale assessment of the conditions of, and threats to, finfish and shark biodiversity assets. The assessment has compiled information on the diversity, abundance, size-structure and distribution of fishes and sharks throughout the Pilbara region. Its hoped that information from the examination of fish-habitat associations and impacts of fishing will inform conservation and management strategies for the region.

The research project was divided into three areas of investigation:

Study locations were selected between northern Ningaloo and the Dampier Archipelago, with surveys for coral reef health and fish co-located along the gradient of fishing pressure. The research has built on existing condition indicators for fish, in particular those developed using data from an eight year time series collected from fished and protected areas at the Houtman-Abrolhos Islands and at Ningaloo. There are also likely to be close links between coral reef health condition indicators and those for fish and shark assemblages given many fish are dependent on corals to provide habitat, which can be affected by any impacts to corals. Fish can also affect benthic systems on coral reefs so changes to fish assemblages may in turn affect corals and algae.

A combination of sampling techniques were used to collect the data, with new techniques for estimating abundance of large fauna that are sparsely-distributed and difficult to survey also being trialled.

What will the research help to answer?

The research has helped to answer some key management questions such as: