Many marine organisms undertake large-scale movements early in their life when they are microscopic plankton. This dispersal phase can have a large impact on how rapidly populations grow and how resilient they are to human or natural perturbations. The North West Shelf (NWS) of Australia features extensive and globally-significant fringing coral reef ecosystems with high levels of endemism and consequently has received significant conservation efforts in the form of Marine Parks.

Some reefs may contribute disproportionally to recruitment in other locations, meaning these “source” reefs make an especially important contribution to the resilience of the ecosystem. The reverse can also be true with some reefs receiving a disproportionally high supply of larvae, meaning these “sinks” are potentially more robust to disturbance.

Having an understanding of these complex patterns and processes can inform management of marine resources.

The PMCP connectivity research team employed a combination of sophisticated 3-dimensional modelling of ocean currents and the behaviour and distribution of corals and fish to map out the “connectedness” of coral reefs in the Pilbara region.

Models developed by the team showed that there is significant regional variation in the number of larvae settling on reefs, and also that some reefs make particularly strong contributions to recruitment elsewhere.

The models have also revealed year-to-year variation on how coral and fish larvae are likely to be transported by currents, and that the behaviour of larvae can strongly influence the direction and distance of transport.

The connectivity team further interrogated the modelling results with a particular focus on understanding the relationships between marine protected areas and between those areas and other habitats. In addition, field studies were undertaken to test the accuracy of the models by measuring larval settlement in different parts of the Pilbara. 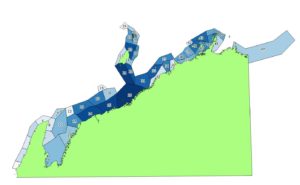 Connectivity of coral reef regions within the west Pilbara. Darker shading indicates a higher degree of relative contribution to supply of coral larvae to other reefs in the region.

The PMCP connectivity research team used a 3-dimensional, hydrostatic, primitive equations model, to simulate the shelf circulation at 1 km horizontal resolution during 2004-2009. A particle tracking model based on the shelf circulation model was also incorporated to understand larval dispersal among the 3430 coral reefs on the NWS during its autumn mass spawning. The coral species, Acropora millepora, was used in this model simulation.

The outputs of the model predicted that settling larvae typically reached suitable reef within 10 days of spawning, with a predominantly southwestward tendency of transport. There was significant spatial heterogeneity in larval settlements, and this also varied among years. By aggregating the reefs into 47 subregions it was estimated that the mean rate of self-seeding (as a proportion of total supply) was 22% (range from 99% to < 1%). Subregions with high retention (as a proportion of total egg production) were not necessarily those with the highest levels of overall larval settlements. Such high “sink” subregions were also some of the most important “source” subregions. The majority of the five most important source and sink subregions were found to be outside existing marine parks, however, marine parks did contain subregions with some of the highest levels of self-seeding and larval retention. A run of the Coral Larvae Dispersal Model.