Corals past and future

Coral growth in the Pilbara region

The PMCP corals past and future project was aimed at understanding how coral growth has responded to past changes in regional climate across northern Ningaloo and the Pilbara region by analysing the physical and geochemical composition of cores collected from massive coral (Porites spp.).  X-ray images of the sliced coral cores have provided the research team with information on seasonal and inter-annual changes in the density and rate of vertical extension from which annual rates of coral growth are calculated, or more precisely, ‘calcification’.  Calcification is the generic term for the process by which corals build their stony skeletons and, in turn, help contribute to the growth and formation of the overall structure of the reef.  This makes it an important metric for determining the ‘health’ of a reef community or system. 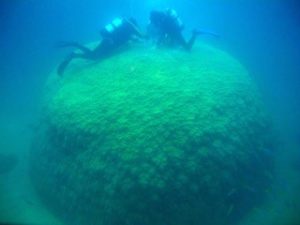 In addition to basic physical growth measurements,  the team has completed analysis on the abundance of key trace elements such as strontium, magnesium, lithium, barium, and boron incorporated into the predominantly calcium carbonate skeleton of the coral.  Select pairs of trace element ratios, such as strontium-to-calcium or lithium-to-magnesium, provide accurate records of seasonal and inter-annual changes in the temperature of the water where the coral is growing.  The temperature-dependent properties of these trace element ratios provides a more accurate chronology (timing) of the growth of the core than from changes in skeletal density alone, and provides in-situ estimates of water temperature when and where such measurements are not directly available by local instrumentation or by remotely sensed satellite images. 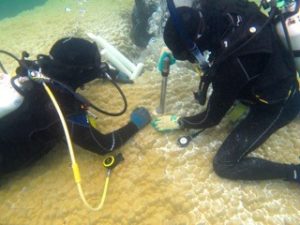 Research Assistant Anton Kuret and post-graduate student Harry Clarke from the ARC Centre of Excellence for Coral Reef Studies at The University of Western Australia collecting cores from a massive coral head (Porites spp.) close to Airlie Island in the Pilbara.

As part of examining the effects of elevated temperature caused by the recent marine heat waves on coral growth and physiology, the research team examined ratios of barium-to-calcium to examine how corals in the Onslow region are affected by runoff from the nearby Ashburton River or sediments stirred up by passing cyclones.