Coral community dynamics – what are we finding?

During the 2011 marine heat wave, coral bleaching was observed in parts of the Pilbara and Ningaloo reef systems. The reef was then again impacted by local heatwave conditions in 2013, causing severe bleaching, and affecting many corals in areas previously unaffected. 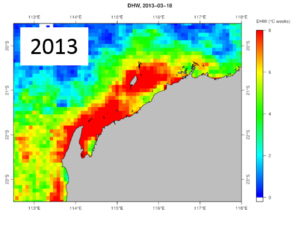 Extent of Pilbara heatwave in 2013: Areas shaded orange were areas of potential coral bleaching and mortality.

The scale of these impacts throughout the region has been documented by the PMCP research team, which saw coral cover drop from around 40% to 10% or less.  The Dampier Archipelago was least affected.

Centuries-old Porites corals (brain corals) were killed or partly killed during this 2013 event, suggesting the intensity of bleaching was unprecedented. The reef area least affected by bleaching was observed by the PMCP research team to be the northern Dampier Archipelago regional area, although bleaching still occurred there in 2013.

The PMCP team is now measuring the rate of recovery of affected coral communities, linking this work with the PMCP connectivity modelling that predicts the flow of coral larvae around and between reefs. This will provide information on how currents and other processes affect reef recovery through the supply of coral larvae. 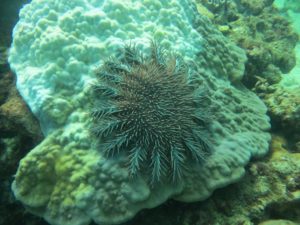 During the 2013 field surveys, the PMCP research team also discovered outbreaks of the crown-of-thorns starfish (COTS) at the Montebello and Barrow Islands. Starfish were concentrated at high densities, with an average of COTS 0.143 tow-1 (8.9 ha-1) and a total of 189 ha-1  of COTS hotspots. The COTS were mainly found feeding in reef areas that had survived the 2011 and 2013 bleaching events, so still contained high coral cover.

Given the corals in this area are predominantly slow growing species the effect of the COTS is likely to be felt for some time.

Significant outbreaks were recorded during the 2014 annual survey and the PMCP has been working to assess reports from the local community of other outbreaks at the Muiron Islands and parts of the Dampier Archipelago.  While some COTS have been detected at these sites, there are no outbreaks at the scale seen at the Montebello Islands in 2013.