Mapping seabed biodiversity in the Pilbara

Between 2012 and 2015, the Pilbara Seabed Biodiversity Mapping & Characterisation Project mapped marine habitats and their associated biodiversity across the length and breadth of the west Pilbara shelf. The regional seabed biodiversity study area spanned the region between northern Ningaloo to the Dampier Archipelago encompassing Barrow Island and the west area of the Montebello Islands to depths of approximately 50 metres.

Information on biodiversity of the seabed gathered during the Pilbara Seabed Biodiversity Mapping & Characterisation Project was collected by visiting 125 sites, representing a wide range of environments on the Pilbara Shelf. Data were collected and processed from over 63 kilometres of towed video and sorting of 1,469 benthic samples and 382 demersal fish samples, from which WA Museum taxonomists and others identified 1326 species or taxa. 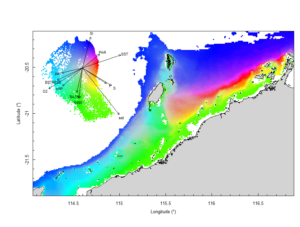 Final seabed characterisation of the west Pilbara region (5-50m): 10 assemblage types were defined based on analyses of new and existing biological survey data with multiple environmental layers. The biplot indicates the principal variables associated with the assemblages.

From this information the project has developed predictive models that have quantified the bio-physical relationships between seabed species, their assemblages and the physical environment. This process has identified 10 unique biogeographic areas, including their composition in terms of habitats, species and characteristic environmental attributes — and produced maps of the distribution and abundance of 180 seabed species throughout the study region. Other outputs from the project include thousands of valuable biodiversity specimens accessioned into WA Museum, including the identification of several new species.

The information provided by the project will help support the sustainable management of the region by mapping biodiversity values and quantifying their levels of protection in sanctuary or special purpose zones, and exposure to areas of use. The outputs will enable a range of quantitative environmental assessments and assist program design for monitoring of biodiversity attributes with respect to various human uses. A copy of the final report can be downloaded here.