Understanding coral reef health and processes that affect them

Coral reefs have long been recognised for their contribution to biodiversity, and their importance as a key marine habitat. Coral reefs are also recognised as being particularly vulnerable to changes in water temperature, sediment and nutrient levels.

Previous research on coral reef systems has highlighted the importance of coral versus algal dominated states on coral reefs, and that this can be used as a measure of reef health and susceptibility to regime shifts. 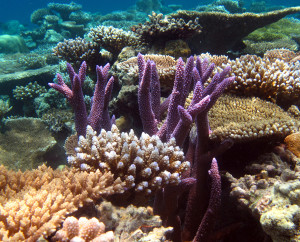 The PMCP coral reef health project has provided context to marine conservation efforts in the Pilbara/Ningaloo area by undertaking the first regional-scale assessment of the conditions of, and threats to, key marine biodiversity assets such as coral cover that are used as Key Performance Indicators (KPIs).

The Pilbara has a range of reef types – from coral-dominated in clear waters and in the southern region to algal and non-coral filter feeder communities in more turbid inshore waters. To take this into account, broad scale sampling of marine habitats has been completed between northern Ningaloo and the Dampier Archipelago, with major study locations selected at Ningaloo and Dampier as well as other sites throughout the region.

Complementing the coral reef health project are the outcomes from the PMCP fish and sharks research project which has looked at the abundance of key invertebrates and associated fishes, and their relationship to the reefs.

Preliminary site selection surveys were completed in 2013 and annual sampling of reefs occurred until 2017, when the current project concluded.

The surveys of the condition of the coral reef KPIs have integrated measurements of past condition with present-day and likely future trajectories in response to both climate change and increased local pressures from the growing human population and increased exploitation of the region.

What will the research help to answer?

The research has helped to answer some key management questions such as: