Characterising macroalgal communities of the Pilbara 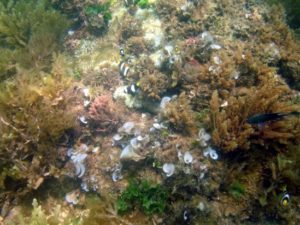 Macroalgae are an important component of tropical reef ecosystems. These habitats contribute significantly to the productivity of the reef, are a major source of food, and provide habitats for invertebrates and fish, including nursery habitats for a range of economically and ecologically important species. Macroaglae can also play a critical role in reef degradation when the balance between fast-growing macroalgae and relatively slow-growing reef-building corals is shifted. 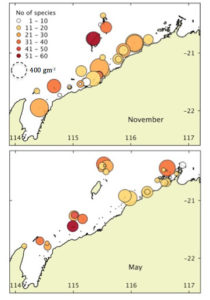 Species richness and biomass at each site sampled in November 2013 and May 2014. The size of the circle corresponds to relative abundance of macroalgae.

Macroalgal communities associated with shallow reefs in the Pilbara region have been characterised by the PMCP macroalgae research team.  This has involved the collection, identification and sampling of biomass at 75 locations in both the wet and dry seasons. The research team found as many as 187 different algae species, highlighting how incredibly diverse the area is. Red algae made up about 60% of the species identified but only 23% of the biomass, while the brown algae represented only 20% of the total species counts but over 60% of the biomass.

The PMCP research team have also tested what shapes the composition of these macroalgal communities by examining a range of environmental and geographical variables. A number of things including season, sea surface temperature, herbivory and competition with corals were found to be important.

The outputs from this PMCP research project provides the first comprehensive regional characterisation of macrophytes on shallow coral reefs in the Pilbara region and identifies the key environmental and biotic factors that influence their spatial distribution. This level of detail on both the distribution and abundance of macrophytes was not previously available for the Pilbara region, so provides important information for both assessment and management.