One year on from the establishment of the Space Future Science Platform (FSP), the inaugural Space FSP Symposium was held at the Powerhouse Museum, Sydney. Over 130 people from CSIRO, industry, the research sector and government attended across two days to learn more about the research being undertaken by the Space FSP through 22 projects across a wide range of space applications, in pursuit of the FSP’s aim to develop new capabilities within CSIRO and catalyse cutting-edge research that will lead to new opportunities for Australian industry and support the Australian Space Agency’s goal of tripling the size of the space sector by 2030.

EO projects under the FSP program include:

Guest presentations were given by the Australian Space Agency, the Space Industry Association of Australia, Woodside Energy, Human Aerospace, the SmartSat CRC and the Department of Defence. The Symposium provided a great opportunity to discuss new Space FSP project ideas and engage with potential collaborators across CSIRO, industry and the research sector. Fittingly, it was held at the Sydney Powerhouse Museum, where attendees had the chance to see the Apollo 11 exhibition. 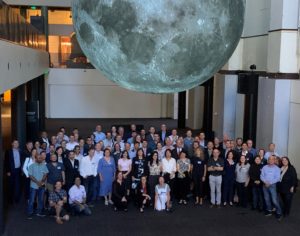 Previous post:
GEO Week 2019: CCEO’s highlights – November 2019
Coming up next:
UK and Australia team up to use space technology for the Pacific – November 2019
Loading Comments...