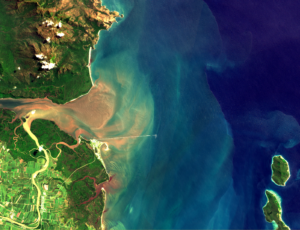 Sentinel 2 image of Lucinda in North Queensland. At the end of the 5km long jetty in the centre is the Lucinda Jetty Coastal Observatory used for validation activities

The Centre for Earth Observation coordinates several internal Communities of Practice for Earth Observation (EO) practitioners. These groups aim to connect all active users of specific EO technology for EO within CSIRO, and enable discussion and collaboration to support research. A workshop bringing the community together over a few days is held at least every year, and presents researchers with an opportunity to engage with external stakeholders.

Current Communities of Practice include:

The annual Earth Observation (EO) Symposium brings together all internal practitioners of and researchers with an interest in EO. The aim of the event is to foster collaboration and connections across different Business Units within the organisation.

The Australian Government Earth Observations from Space Working Group (the Group) brings together Australian Government agencies to coordinate civilian activities relating to the exploitation of Earth Observation (EO) satellites in support of Australian Government priorities. The Group is co-chaired by the Bureau of Meteorology, Geoscience Australia and CSIRO, as the agencies that develop and maintain the Commonwealth’s civilian EO from space infrastructure. The Group also engages with agencies relying on EO satellites and related services, and more broadly with state and territory governments, industry representative bodies and national research infrastructure facilities. 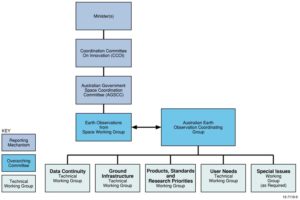 Key activities of Australian Government agencies in relation to EO from space infrastructure coordinated through the Group are:

Australia is a major user of EO, and investment in EO-related capabilities is increasing, both in government, in the research community, and in the private sector. The Australian Government aims for local industry to participate in the global satellite applications market, exploiting EO alongside other technologies. Australia also advocates for EO to be applied internationally to improve governance and to support sustainable economic development.