The first remote sensing algorithm developed by CSIRO for use in the GBR is an atmospheric correction method based on an artificial neural network (ANN) trained with a simulated set of optical and atmospheric properties characteristic of the region.

Historically a wide variety of physically-based methods have been developed to apply atmospheric correction. These techniques rely on a combination of external inputs (numerical weather analyses, for example) and empirical relations, derived from the multispectral satellite data themselves, to quantify the relative contributions of atmospheric constituents.  A difficulty with these methods is that they frequently make assumptions about the absence of any water leaving radiances in particular (red) wavebands in order to decouple the oceanic and atmospheric signals.  Under conditions of elevated turbidity, such as in the vicinity of flood plumes, these assumptions can be violated, leading to inaccurate determination of the atmospheric constituents, and inaccurate assignment of the contributions to the top of atmosphere signal from the atmosphere and the ocean.

The ANN uses a different approach (right). By simulating the water surface reflectances that would result in each satellite waveband from a wide range of in-water properties (such as turbidty, chlorophyll concentration, dissolved organic matter), a physical model of the atmosphere is used to produce corresponding reflectances at the top of the atmosphere. By repeating these simulations for a huge combination of different atmospheric properties, as well as satellite viewing and solar illumination geometries, a database of top of atmosphere reflectances can be compiled. To cover a realistic range of conditions, the actual number of these individual simulations results in approximately 12 million pairs of top and bottom of atmosphere reflectance spectra.  The artificial neural network uses a subset of this database as a training set to derive its node weights.

The weights are then used when the ANN is applied to individual pixels in a top-of-atmosphere satellite scene. The ANN thus implements a very efficient functional lookup table for retrieving the bottom of atmosphere reflectances, provided the training set is representative of the actual physical atmosphere and water conditions present in the satellite image. It is important to note that the ANN has to be tuned for each satellite sensor, because it depends intimately on the radiative transfer in the atmosphere in the wavebands of that sensor. The MODIS sensor, for which an ANN solution was refined in the first stage of eReefs, is now well beyond its planned mission life. Therefore to sustain the system into the future it is necessary to develop an ANN for the next ocean colour sensor, VIIRS, launched in 2011.

Selection of the most suitable combination of weights is achieved by comparison of satellite reflectances, processed by the trial ANN, with reflectances measured in situ at the water surface. It is important that the in situ measurements are also representative of the specific regional characteristics of the GBR. Following strict quality control of both the in situ observations and the satellite imagery, a total of 45 pairs of reflectances were available to assess the performance of the ANN developed for the VIIRs sensor (left). This new ANN solution, developed in the most recent eReefs work package, complements the solution previously developed for the MODIS sensor.

The process of inferring in-water concentrations of optically active constituents from measured spectra at the surface is an inversion problem. It is achieved by modelling the water-leaving radiances as a linear sum of spectral models of the optically active water constituents, and using a linear matrix inversion (LMI) least squares method to solve for the relative proportions (Hoge and Lyon, 1996). A major difficulty with this approach is that the natural variability in the spectral properties (ie. spectral shape and amplitude) means that multiple versions of the models are required to match the range of observations, but for any given pixel there are usually only 5 – 8 spectral bands being measured.  This is particularly an issue in complex waters such as the GBR lagoon, where there are substantial differences in the optical properties between the tropical wet and dry seasons, and due to the influx of turbid river water, particularly during flood events.

The adaptive Linear Matrix Inversion (aLMI) developed by CSIRO for the GBR (Brando et al, 2012), accommodates this need by iterating over a limited number of model parameter sets that account for the observed variability (below).  The individual parameter sets, which characterise specific inherent optical properties (or SIOPs), are derived from in situ observations of naturally occurring water masses collected in the GBR.  So although there is a potentially very large range of models to choose from, the aLMI process is presented only with those that are physically realistic and likely in the GBR conditions. As in the LMI approach, the measured spectrum for each pixel is fit to each parameter set to derive concentrations, but then a single solution is chosen on the basis of the quality of the fit to the observed reflectances. The outcome of the process for each pixel then is a set of constituent concentrations, a parameter set ID, and a measure of the quality of fit.

Conceptual diagram of the adaptive Linear Matrix Inversion approach adopted for the retrieval of CHL and IOPs from atmospherically corrected satellite data. The satellite reflectances (rrs) are iteratively tested against sets of IOPs. The best fit yields the output which is both the set of retrieved concentrations (CCHL, CCDOM and CNAP) and the IOPs of the selected set. See Brando et al. for a complete description of the symbols in this figure. 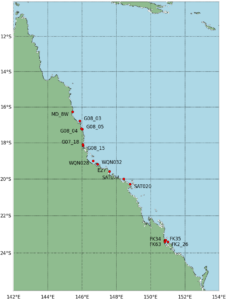 Locations of the selected SIOP sets.

The process of selecting the candidate SIOPs is iterative.  Initially 162 possible sets were available.  These were divided into geographical groups and then each group was tested using matchups of in situ measurements of CCHL, CCDOM or CNAP with satellite data.  The atmospherically corrected satellite spectra were run using the aLMI inversion with all possible SIOP sets for that region. Sets that were not selected, or that led to the most inaccurate retrievals were rejected, and the process was repeated with the reduced candidate set. Finally the geographical groups were merged, and one further iteration of testing and rejection was undertaken to yield a final set of 15 SIOPs. Of these 15, 10 were sampled in the dry season and 5 in the wet season.  The map (left) shows the sample locations.

Matchups of satellite concentration retrievals against in situ concentrations. Top row is for MODIS, bottom row for VIIRS. The three columns are for CHL, CDOM and NAP from left to right.

The final step is to evaluate the performance of the system by comparing constituent concentrations derived using the selected SIOP sets for all the matchups of satellite data with in situ concentration measurements.  This is shown separately for the MODIS and VIIRS matchups at the right. The CHL retrieval accuracy for both is similar (mean absolute percentage error ~130%).  The CDOM retrievals are nearly twice as accurate but are based on significantly fewer matchups. The NAP retrievals are affected by underestimation at high concentrations (ie in extreme conditions such as flood events). Future work is needed to explore the reason for this, and to ascertain whether there is yet sufficient variability in the in situ measurements in the candidate set to properly represent actual extreme conditions.