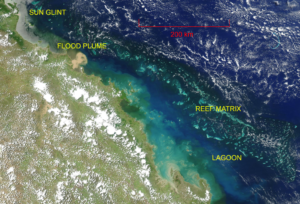 The pseudo true-colour satellite image of the GBR region (left) shows that many features of the water body are visible to the eye as different colours, including the presence of suspended sediments and other optically active constituents, as well as the reef structure in shallower areas.

Optical remote sensing works by observing sunlight reflected from the earth.  The interactions of that light with the atmosphere and the surface, and the sub-surface (in the case of the ocean), modify the light that is reflected back to the satellite sensor.  Through  measurement these changes can be quantified, and information about the interacting materials can be deduced.

By accurately modelling the unwanted effects of the atmosphere and the surface, the apparent optical properties (AOPs) of the water can be estimated. With further modelling based on some prior knowledge of the gross water properties, an inversion is possible to retrieve the inherent optical properties (IOPs) including the spectral scattering and absorption. These then lead to physical properties of environmental interest such as the concentrations of chlorophyll  (CHL)  and suspended sediments (non-algal particles, NAP), as well as the absorption of coloured dissolved organic matter (CDOM).

Contribution of atmosphere to signal measured by satellite at the top of the atmosphere. Note the relatively small contribution of the signal of interest – the water (green line).

In general, water is not a strong reflector of light. In fact it is a particularly strong absorber at the longer visible wavelengths (>600nm). In comparison, water vapour and aerosols in the atmosphere interact very strongly with visible light (right).  Consequently over 90% of the light reaching the satellite sensor in the blue part of the visible spectrum is returned from interactions with the atmosphere.  When heavily sediment laden waters are present (for example, the flood plume in the figure above), the light reflected from within the water is greatly increased, and this in turn alters the relative magnitude of the atmospheric contribution. Accurate modelling of these effects is therefore critical to being able to isolate the component of the measured spectra arising from interactions within the water itself.

CSIRO has developed two remote sensing algorithms for use in the GBR.