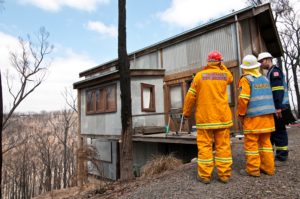 CSIRO was a participating agency in the Bushfire Cooperative Research Centre, which looked at the key issues in the February 2009 bushfires.

In Australia the impact and cost of recent extreme events has been significant in the short term to the economy, society and the environment:

In the absence of intervention, we know the frequency of many of these events and their impacts will continue to increase over coming decades, due to population increase, property development and climate change.  This will impact the bottom line of government budgets at all levels.  It will also affect loss of life – for example, once mean temperatures increase more than 2°C, the effect of heatwaves on years of life lost rises rapidly.

Yet we know that preparing for extreme events better, through planning, engineering and awareness, can greatly reduce the social and economic costs of these events. For example, cyclone building codes in northern Australia are very effective at reducing damage from high intensity wind events. Thus Australia can prepare better for extreme events, and recover from them more quickly.

CSIRO is working to help halve the projected death rate due to all types of extreme events and to halve their projected economic costs by 2050.

Find out more about CSIRO’s current research into extreme events.