Climate research and research on how to respond to climate have had a very long history in CSIRO. In the 1980s our atmospheric and oceans researchers were already raising the risks of climate change, while agricultural and grazing systems researchers were helping farmers to deal with climate variability. Around 1990, the Climate Variability ‘multi-divisional program’ started to formally bringing these efforts together, to link the basic climate research end-to-end with how it may be used in applications more closely.   For example, the ‘Oceans to Farms’ project, completed in the early 2000s, took climate researchers to talk directly with farmers, mediated by rangelands specialists, leading to new seasonal forecasting techniques that were tested for their practical value in models of grazing properties (e.g. see McIntosh et al 2005 From oceans to farms: Using sea-surface temperatures in agricultural management)

During the early 2000s these interactions were semi-formalised in CSIRO’s Impacts and Adaptation Working Group, a set of researchers from across many disciplines, starting to think about how all sorts of Australian industries were going to cope with climate change. The IAWG was convened by Dr Andrew Ash. In 2007, the Commonwealth budget provided $44 million over four years to help establish the Climate Adaptation Flagship under Andrew Ash’s leadership, and drawing on this established network. These funds were part of a $170 million investment in climate adaptation by the government of John Howard, with $126 million being allocated to the new Department of Climate Change and Energy Efficiency (DCCEE) to establish an adaptation program.

Minister Kim Carr officially launched the Climate Adaptation Flagship in July 2008, and the Flagship grew steadily to an annual budget of $43 million (2010-11, similar in the subsequent 3 years) and about 160 full-time equivalent staff. In addition to the new money provided by the Commonwealth budget, CSIRO migrated a significant amount of relevant research into the Flagship from other Portfolios; by 2010 this research was re-aligned to address the core goal of the Flagship. This goal combined the motivation of assisting Australia to respond to the challenge of adapting to climate variability and change, with the pragmatic need to deliver genuine economic benefits, and was:

Equip Australia with practical and effective adaptation options to climate change and variability and in doing so create $3 billion per annum in net benefits by 2030.

The Flagship was a major player in the national effort towards adaptation to climate change, which included the National Climate Change Adaptation Research Facility (NCCARF) established by DCCEE in 2008 and hosted by Griffith University. There are still close working relationships between CSIRO, NCCARF and the responsible Commonwealth Department. For example, in June 2010, CSIRO and NCCARF co-hosted the first global Climate Adaptation Futures conference, which was opened by the then Minister for Climate Change Penny Wong and attended by more than a thousand delegates from Australia and overseas. This was the first of a biennial series of global conferences (following by Arizona in 2012, Brazil in 2014 and Rotterdam in 2016), and an almost annual series of Australian national conferences, mostly co-convened by NCCARF and CSIRO ever since.

The Climate Adaptation Flagship was organised in 4 Themes: 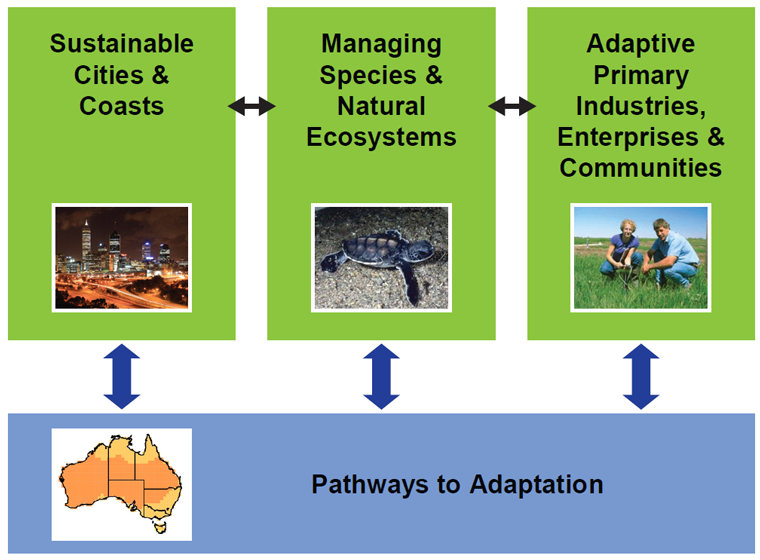 Aside from work under the Themes, CSIRO through the Climate Adaptation Flagship also commissioned a series of collaborative projects and clusters with other research organisations, driving productive investigations into issues that the Flagship could then turn into options for decision makers. The largest of these were clusters, 3 year investments in to university partners on major topics including a regional approach to adaptation in south-east Queensland, health and climate change, and climate adapted engineering for extremes. More details on these and others can be found at Major collaborations – Clusters.

During 2009-2014, the existence of NCCARF, the Climate Adaptation Flagship, and its many collaborative projects and clusters provided Australia with a capacity for coordinated adaptation research that was globally unique. The products from NCCARF during this period may be accessed at their Adaptation Library, including works by CSIRO as an NCCARF partner; and of CSIRO on this website. Some of the key references from CAF may be found at Publications.

In mid-2014, CSIRO had a major internal re-organisation which consolidated its activities into 9 large business units, and the Climate Adaptation portfolio was absorbed across several of these (principally Land and Water, Oceans and Atmosphere, and Agriculture). Dr Mark Stafford Smith was appointed part-time to maintain some coordination across this dispersed capability, and a substantial amount of adaptation research continued across the organisation. By 2016, this effort has started to fragment and be re-oriented into other activities, although usefully spreading the experience and understanding of adaptation into many areas across the organisation.

This website seeks to ensure that there is a location where the past and on-going work can continue to be collected and accessed to our national benefit. See Adaptation concepts for key adaptation concepts and other questions.