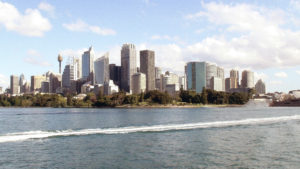 Climate change threatens the cities and fast urbanising coasts where most of the world’s population lives.

Our cities’ sustainability is challenged by weather-related disasters that damage our water, energy, transport, buildings and telecommunications infrastructure.

These impacts of a changing climate add to existing challenges such as urban sprawl, population growth, pollution and the loss of biodiversity.

We need to understand and plan for the likely local impacts of climate change.

We are applying those skills and experience to help Australian cities and coastal communities prepare for the impacts of climate changes, while also reducing our urban greenhouse gas emissions and improving long-term sustainability.

Analysis of Climate Change Impacts on the Deterioration of Concrete Infrastructure

This report documents mechanisms of deterioration in concrete structures and approaches to modelling concrete corrosion under climate change conditions. It is based on an analysis of climate change impacts on the deterioration of concrete infrastructure that was funded by Department of Climate Change and Energy Efficiency (DCCEE) and the CSIRO Climate Adaptation Flagship.

It aims to draw together all the major outcomes from the study for the benefit of policy-makers, engineering designers, asset managers and other professionals and decision-makers in both public and private sectors to assist them to understand the potential impact of climate change on concrete infrastructure.

It also aims to provide guidance and examples to assist appropriate adaptation responses at the design and maintenance stages.

The scope of the report includes the findings from the review as well as impact and adaptation assessment contained in three parts.

This 85-page report assesses the economic viability of three proposed climate adaptation strategies to improve the ability of residential constructions to withstand damage from a changing climate and higher wind speeds.

The Latin America region accounts for about 10 per cent of world consumption of primary materials. As a result, developments in this region do not have a major effect on total global extractive pressures.

However the reverse is not true.

Even modest increases in the resources demand of larger regions, which are transferred by trade activities, can have major effects on material flows in Latin America.

Early in the period 1970 to 2008 the Latin American region was relatively inefficient at converting its primary resources to income: it became progressively less efficient at extracting value as the period progressed.

Some, albeit few, of the individual countries of the region managed to defy this trend during this period.

The major increase in commodity prices over the first decade of the 21st century slowed the rate of decline of the region’s resource efficiency, but did not reverse it.

Any return to the declining terms of trade which characterised the later decades of the 20th century would produce escalating environmental pressures just to maintain current material living standards.

The rapid increases in population in the region which drove growing environmental pressures in the earlier decades have eased greatly.

This means that in recent years the main economic driver has growth in per capita incomes and the higher per capita consumption levels that tend to accompany increasing wealth.

Findings of this project are outlined in the report and are based on the first material flows database, which has been specifically designed to cover the great majority of the combined Latin America region, using standardised material flows accounting methodologies.