Training our best and brightest…

Mesophotic reefs are a relatively understudied ecosystem and generally occur from ~30 metres (water depth) to the bottom of the photic (light) zone. Such reefs have been shown to harbor high biodiversity. 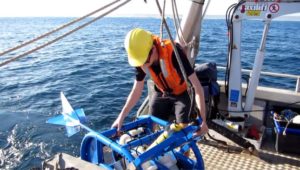 Joe Turner hard at work on a deepwater reefs field trip at Ningaloo.

Since being awarded the Ningaloo Outlook PhD scholarship in January 2016, Joe has been coming to grips with his research subject and has notched up three trips to Ningaloo to explore the deep reefs. Joe has also headed south to Tasmania where he received training from the CSIRO Oceans and Atmosphere team in Hobart on how to use the acoustic processing programs CARIS and Fledermaus. This training has ensured Joe can generate habitat maps for the deep reef areas being investigated.

To mark the end of his first year, Joe put together a short video about his PhD, you saw it first here!

Dr Russ Babcock from CSIRO who is a co-supervisor said “Joe has really become a part of the team and it’s been really rewarding to see just how much he has learned, and the new skills he has picked up, in just the first year of his project.  I am really excited to see what discoveries he comes up with in the next couple of years.” 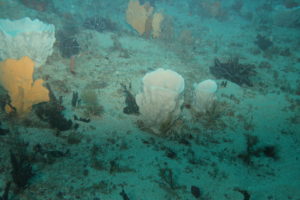 An example of a deepwater habitat observed during one of the field trips at Ningaloo.

Its been a busy year, but the pace will continue to pick up in 2017, with the current schedule focused on quantifying the communities present and examining how they relate to both environmental and geophysical variables as well as investigating the recruitment dynamics across these same gradients.

In summing up the year Joe said “This past year has been fantastic, we have collected a vast amount of data already thanks to the AUV with plenty more to come.  We have already learnt a lot about the biological communities that are occurring in the deeper areas and I look forward to exploring the data in more detail.  Progress is going well and I’ve settled in well in Perth, hopefully this will continue in 2017!”