Ningaloo is a globally-important location for whale sharks (Rhincodon typus), the world’s biggest fish. The reef hosts one of the worlds largest known aggregations of whale shark which occurs between March and August year. 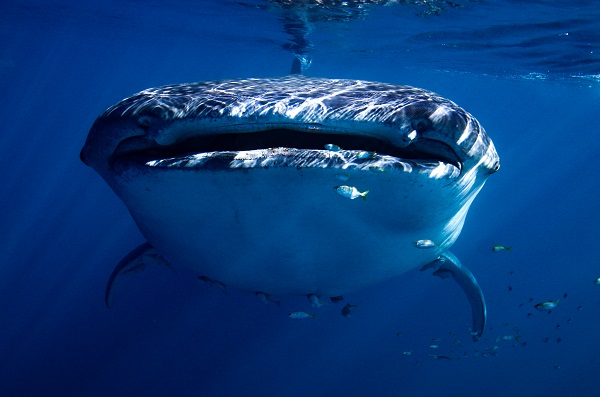 Whale shark (Rhincodon typus), the largest known fish, can grow up to 14 metres and weigh up to 12 tonnes (Image courtesy of Dr. Richard Pillans/CSIRO).

Since 2015 Dr. Richard Pillans has been leading research on Whale Sharks for the Ningaloo Outlook partnership to improve our knowledge of this wide-ranging species. During the first phase of Ningaloo Outlook (2015-2020) forty-six Whale Sharks were tagged with satellite tags. These tags were used to track their movements of individual whale sharks to enable scientists to better understand where the animal travelled to, and also uncovered some rather interesting data on diving patterns. Read more about what researchers found by clicking here or reading our Ningaloo Outlook Highlight Report.

The new phase of the Ningaloo Outlook project (2020-2025) aims to help address a global knowledge gap by estimating adult population abundance using tissue samples collected from whale sharks at Ningaloo. These samples will be collected during the annual aggregation and will be used to estimate the adult population size found in the eastern Indian Ocean using state-of-the-art Close Kin Mark-Recapture (CKMR) genetic-based methods. The team will also look to determine the extent of connectivity between Ningaloo and aggregations in the Indian and Pacific Ocean.

A key element of the Ningaloo Outlook partnership continues to be the opportunity to train our future scientists, providing them with a range of skills and opportunities to set them apart. Colby Bignell joined the whale sharks research team in February 2022 and will undertake work towards a PhD degree at the University of Tasmania. Colby will explore the movement ecology of elasmobranch species at Ningaloo including reef sharks and the iconic Whale Shark, to identify any patterns and drivers in their movement and habitat use.