Sorry… our competition has now closed…. our winning names are:

It was a close tie for third, with Myrtle losing out by a meager one vote!!!

Thank you to everyone who submitted a vote, with 665 were have been overwhelmed!

With such a fantastic response to the ‘turtle naming’ competition, the Ningaloo Outlook team had a tough job of selecting the top 10 for voting. But here they are (the name and why)!

You can select up to three favourites, so get clicking…. 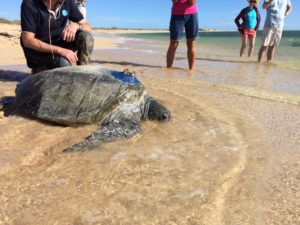 The winning names will be announced on the 18th January 2017.

The location of all turtles tagged as part of the Ningaloo Outlook research partnership can be viewed at seaturtle.org so why don’t you watch their journey on your screen without getting wet and salty!