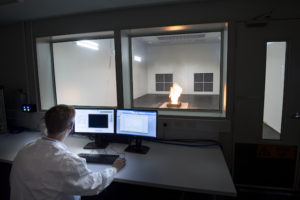 The test fires are conducted during conformity evaluation (type testing) of residential smoke alarms and commercial smoke detectors. Specifications for the test fires are identical to those given in similar international standards, such as EN 14604 and ISO 12239 (Smoke Alarms), and EN 54-7 and ISO 7240-7 (Point type smoke detectors). Smoke sensing products that are subject to these fire tests include point, beam and aspirating, as well as residential smoke alarms.

Australian Standards AS 3786, and the AS/ISO 7240 (and EN54) series, describe in detail how the test fires are conducted. To ensure that smoke detection products are sufficiently sensitive to a wide range of smoke types, a range of fuel types are used, with both smouldering and flaming-type fire conditions required. Test fire fuels include smouldering wood (TF2), smouldering cotton (TF3), flaming polyurethane (TF4), and flaming n-heptane/toluene (TF5).

To ensure a good reproducibility of fire conditions between different test laboratories, all test fires are required to be controlled. An individual test is considered valid when the rate of smoke development (i.e. %obscuration vs. time) remains within specified limits, as does the ratio of the %obscuration and reference MIC (measuring ionisation chamber) response. This further guarantees that smoke detection products are verified to be responsive to smoke containing large particles with high obscuring power, such as that which develops in a smouldering fire, and also smoke containing numerous small particles with low obscuring power, such as might be developed by a hot flaming fire.

Fire Systems’ new laboratories at CSIRO’s Clayton VIC site are capable of evaluating products to the full requirements of the ISO/EN-based smoke detector and smoke alarm Standards. The laboratory is equipped with fully standards-compliant infrared obscurometer (light beam) produced by Lorenz Messgerätebau in Germany, and reference ionisation chamber produced by Delta in Denmark.

CSIRO Fire Systems celebrated its 50th year of NATA accreditation to a wide range of fire detection and alarm system standards. Accreditation for AS 7240.2 (c.i.e.) and AS 7240.4 (p.s.e.) has been held since soon after their publication in 2004, and is progressively being extended to cover all of the AS 7240 detector standards. The laboratory’s current scope of accreditation can be found on NATA’s website through this link: CSIRO Fire Systems Laboratory.

Previous post:
How long does a test take?
Coming up next:
Glazing boil test