We are collecting DNA samples from the whale shark population at Ningaloo Reef, Western Australia, to determine how many there are also how old they are, while also unlocking the secrets of where they travel to and how deep they go. 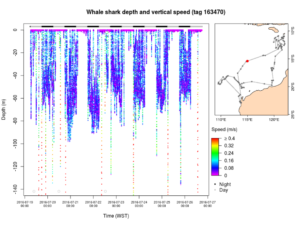 Using DNA from whale sharks for genetic ageing has never been attempted before but will provide a critical piece of data on their age to help us estimate the population on the western coast of Australia and the eastern Indian Ocean. We are also using satellite tags to track where the whale sharks go to gain an insight into their movement and behaviour.

Previous tagging has revealed whale sharks have swum as far south as Perth and others have been located as far as the Gulf of Carpenteria, 3,500km away. We have also recorded a whale shark diving as deep as 1.8 kilometres, where it’s a chilly 3°C.

Although the largest fish in the sea, the whale shark is extremely elusive with much of its behaviour still unknown. Whale sharks are attracted to Ningaloo Reef to feed, and form part of the Reef’s diverse marine ecosystem. With continued research we hope to find out more, including where whale sharks mate and where they go to give birth to their live young.

Read more about the team is doing over at our CSIRO BLOG or on the ABC News website and watch our short video!

Previous post:
Marine debris levels at Ningaloo… what are we finding?
Coming up next:
National Science Week and Exmouth School