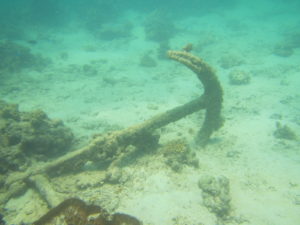 The anchor is likely to have come from an old coastal trading ship (Russ Babcock, CSIRO)

CSIRO’s AUV, StarBug, has taken video footage of an old anchor during its most recent mission at Ningaloo reef (in October). During a test run of the AUV in shallow waters, the deep reefs team came across the anchor and after consultation with the Western Australian Museum, its looking to be rather old…. read more about this discovery at ABC News!