Why did you choose to study colonial-nesting waterbirds?

Colonial-nesting waterbird species are our primary targets for recruitment data collection, because:

Why did you choose to track straw-necked ibis?

Straw-necked ibis were chosen for satellite tracking because they are good representatives of the above list, are known to nest in large numbers in nearly all major Murray-Darling Basin wetlands managed with environmental flows, and are a species of particular interest to managers. In the future, we hope to also track the movements and habitat use of species with even closer ties to water for feeding and breeding, such as royal spoonbills.

What is the difference between straw-necked ibis and the white ibis that are seen to be a problem in some cities?

They are different species, with different physical features and different preferences and habits.

Straw-necked ibis (Threskiornis spinicollis) have spectacular rainbow-hued iridescent dark feathers on their wings and back, and distinctive straw-like feathers on their necks. They are also known as the ‘Farmer’s friend’ because when on dry land they eat large quantities of pest insects such as locusts. When in wetlands they eat frogs, aquatic insects, spiders, fish, molluscs and small reptiles. They are generally thought to be less adaptable and opportunistic than Australian white ibis, don’t scavenge as much and tend to avoid saltwater areas. They are highly mobile and nomadic, and appear to have closer ties with inland floodplains and wetlands. 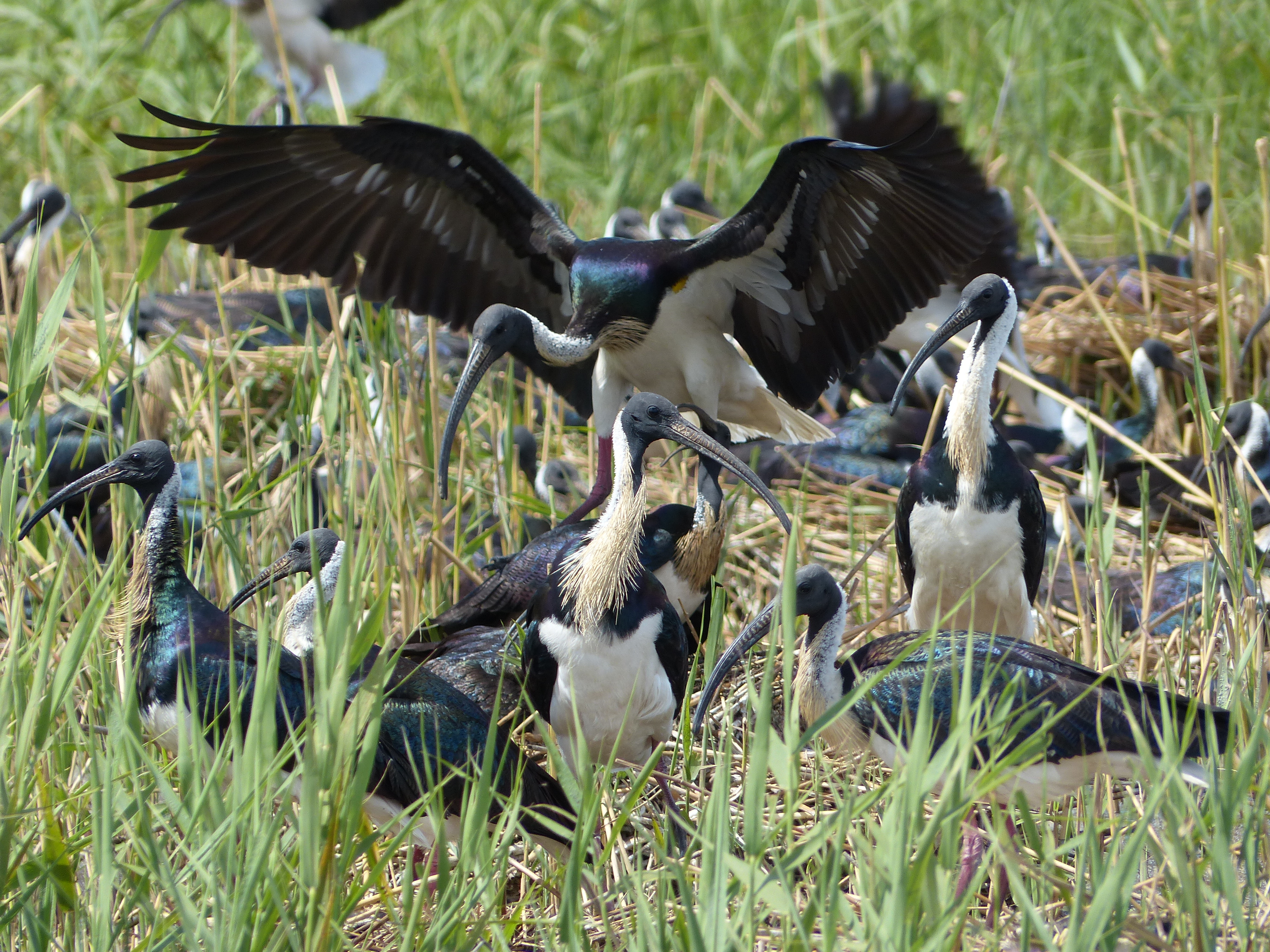 Australian white ibis (Threskiornis molucca) have a predominantly white body and wing feathers. They are highly adaptable and opportunistic and have now permanently occupied some coastal cities such as Sydney and Brisbane because of a loss of water, food and habitat resources in their natural habitats inland, as flooding regimes and landscapes have changed with agricultural development. The consistent and abundant resources provided by cities, especially in terms of water, food wastage and rubbish tips, have meant that many of these birds have become full-time breeding residents instead of occasional visitors.  Other Australian white ibis still live, breed and move long distances inland, and it is not known to what extent these ‘country’ birds interact with their city relatives. 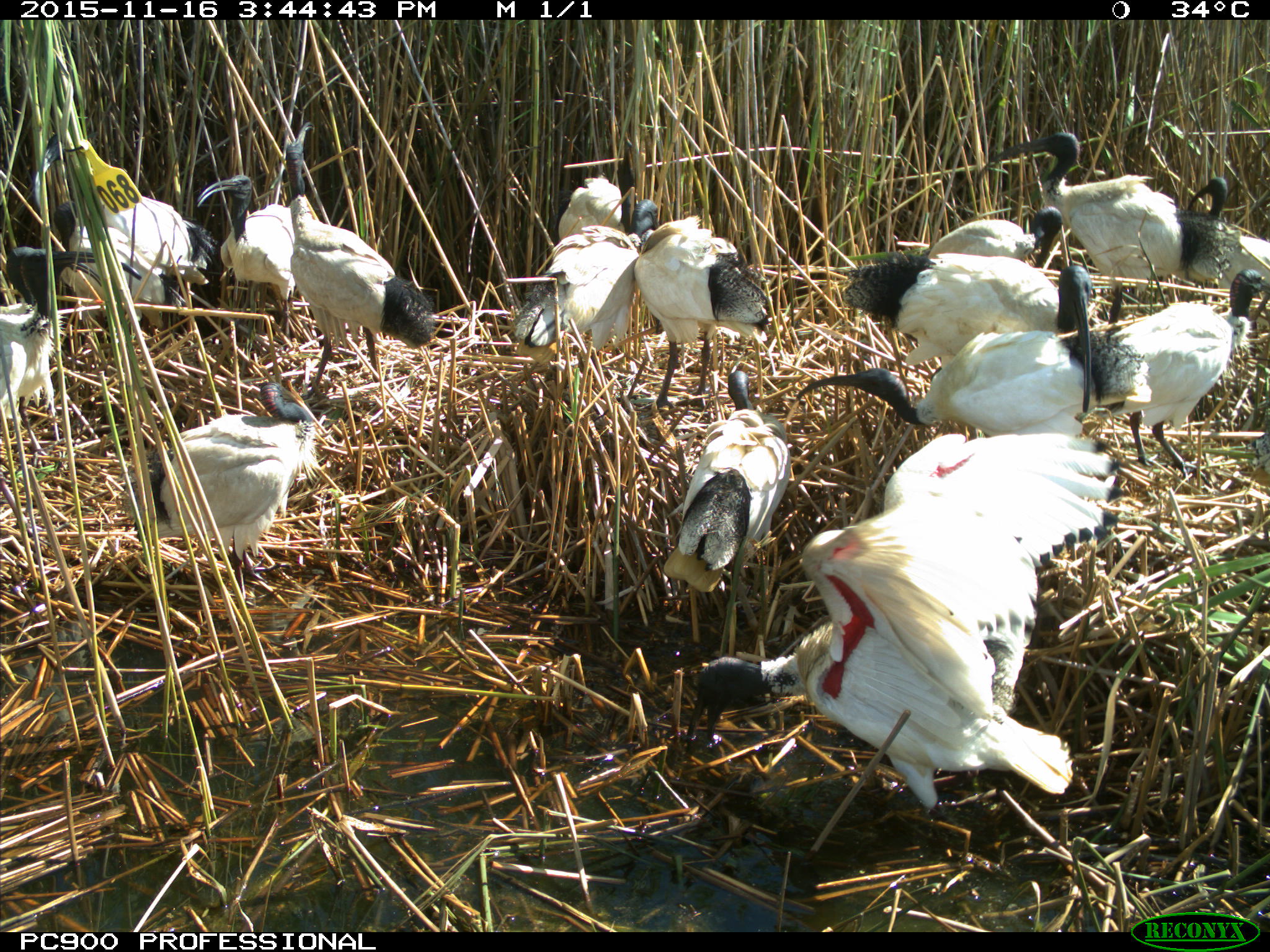 Australian white ibis have a predominantly white body and wings. The ibis in the foreground with its wings up is showing the usual red skin patch present during the breeding season.  Image credit: CSIRO

Are the satellite trackers battery-powered or solar-powered?

At present all but one of the tracker types we are using are solar-powered.

For how long will the trackers be sending information?

We expect these trackers to function for at least two years, quite possibly more. We currently have birds who have been tracked for over three years.

How often is a bird’s position recorded?

This depends of the type of tracking unit and the species the tracker is on (for eg. royal spoonbills are also active at night so more frequent location fixes are required at night compared to other species). The frequency of location fixes may be every 10 minutes, 60 minutes, 3 hours or 12 hours. These positions are transmitted to the satellites approximately every 36 hours (transmitters are on a 36 hours OFF 8 hours ON cycle). Some trackers allow us to change settings remotely so the frequency of location fixes can be increased or decreased throughout the year.

How accurate are the position GPS fixes?

The fixes are usually accurate to within approx. 10m. For example, in most cases (together with satellite imagery) we can tell exactly which tree a bird is roosting in. Each fix has an accuracy rating which helps with data interpretation.

Who made up the bird names?

The bird names are chosen by the field team and are loosely based on the first letters of the colours of each bird’s unique leg-bands (where bands are fitted). For example, ‘Gracy’ has leg bands that are Green over Yellow, and ‘Bridget’ is Blue over Red. 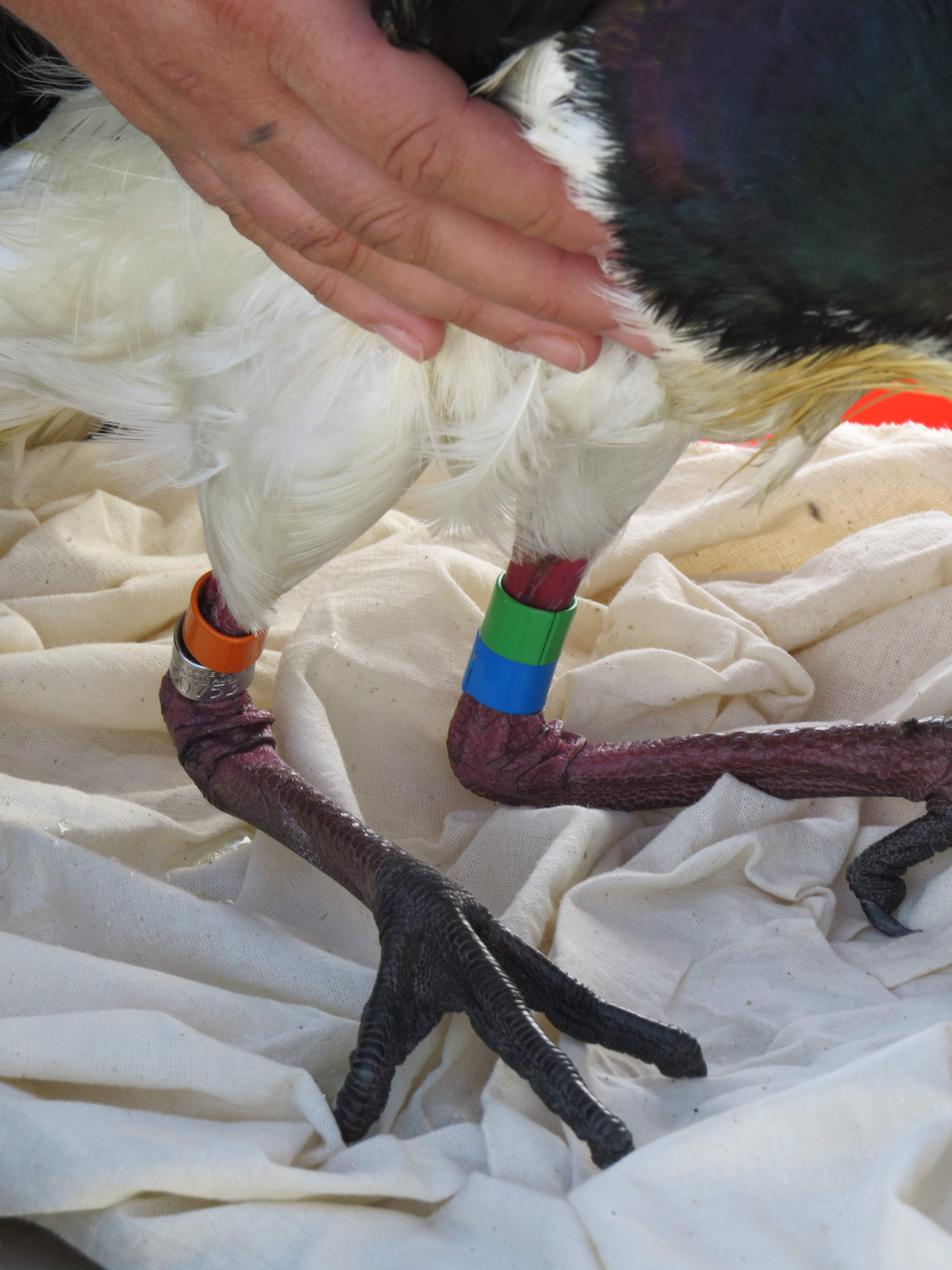 This bird has unique leg-bands of Green over Light Blue, so was named ‘Gill’. Image credit: Freya Robinson

Why do the birds choose to leave, go to or stay in a particular location? E.g. is it temperature, habitat, weather, flooding, drying, air pressure, wind, thermals?

This is part of what we are trying to find out. We will be using the bird tracking data together with a range of other data sources on water, weather and habitat to explore what might be driving bird decisions.

Can you tell if the tracked bird is with other birds?

Only if the site is visited. We are currently looking for volunteers to visit the sites where tracked birds are spending a lot of time, to see how many other birds (and of what species) they are with, and to document/photograph the habitats being used.

Can’t you fit a small camera with the tracker?

Each tracker must weigh less than 3-5% of the bird’s weight, limiting the amount of ‘kit’ a bird can carry. Also, at present the technology isn’t quite up to allowing frequent location and photo information to be captured and sent from a solar-powered tracker.

How big are the trackers and what do they weigh?

The trackers currently being used weigh approximately 12g and 20-22g and 30g, depending on the unit. While very light, they are deliberately built to be tall to stop feathers from obscuring the solar panels. 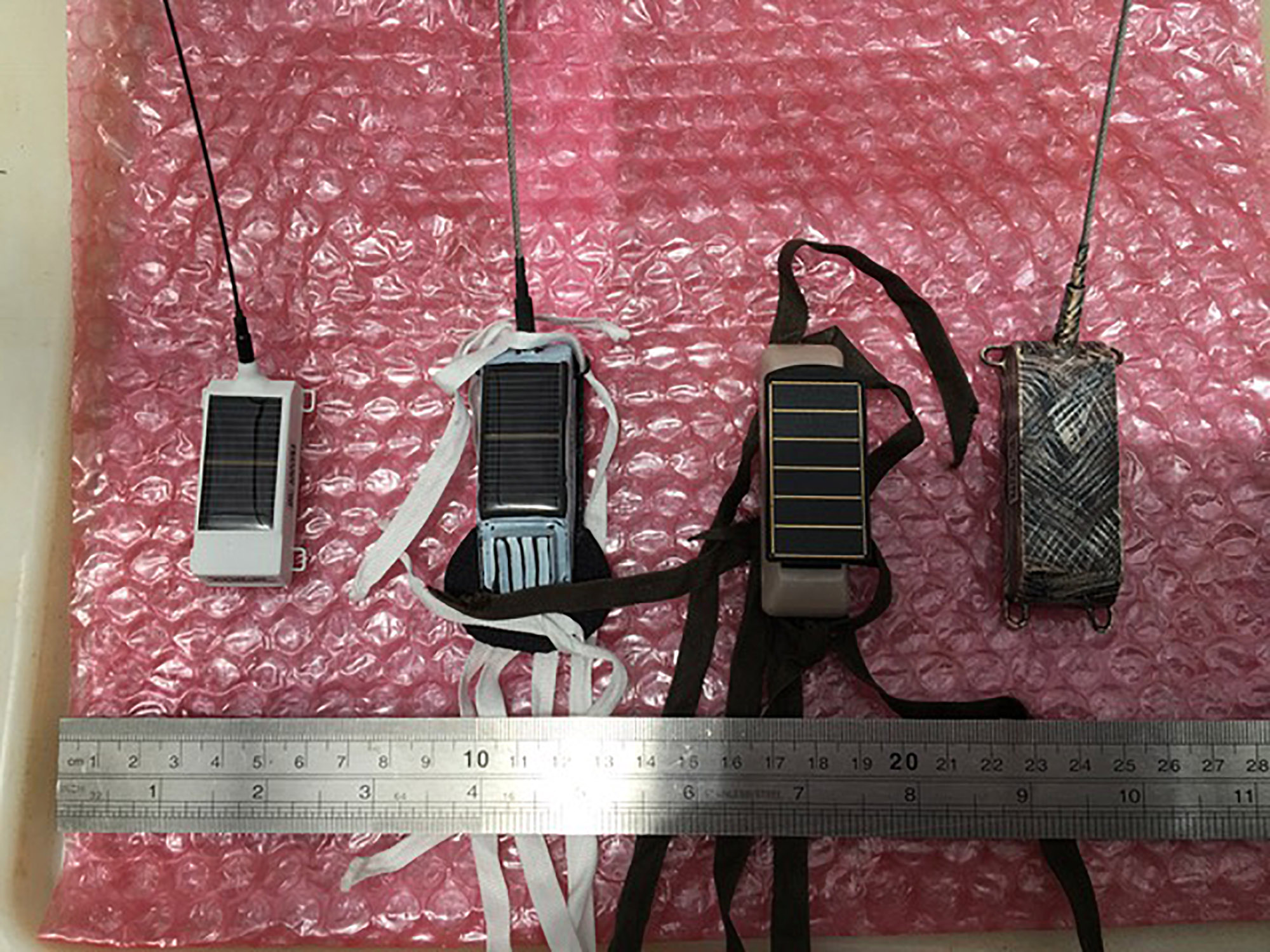 What are the types of habitats the tracked birds are foraging in so far?

Birds have been tracked foraging in remnant woodlands/wetlands, floodplains, parks, sports grounds and agricultural lands of various types. They typically roost overnight in large trees, but are happy to forage in either open areas or wooded areas.

What should I do if I see a tracked bird, or find one deceased?

Please contact the Theme Coordinator, Heather McGinness on 0428124689. It would be much appreciated if you could record the location, date and time, and if possible take photographs of the location and birds. If you find a deceased bird or tracker, you can post the tracker at CSIRO’s expense to Heather McGinness, CSIRO, GPO Box 1700 Canberra ACT 2601.

What do these birds die from?

These species frequently die from predation, botulism (a soil-borne disease that causes paralysis) and other diseases, starvation, and getting stuck in power lines and fences.

Do your nest monitoring cameras function at night as well as during the day?

Yes, depending on their precise settings. Some of our cameras are set to capture all major movements at the nest, night and day (e.g. predation). Others are set to simply capture regular images in the daytime to help us track the ultimate fate of the nest. 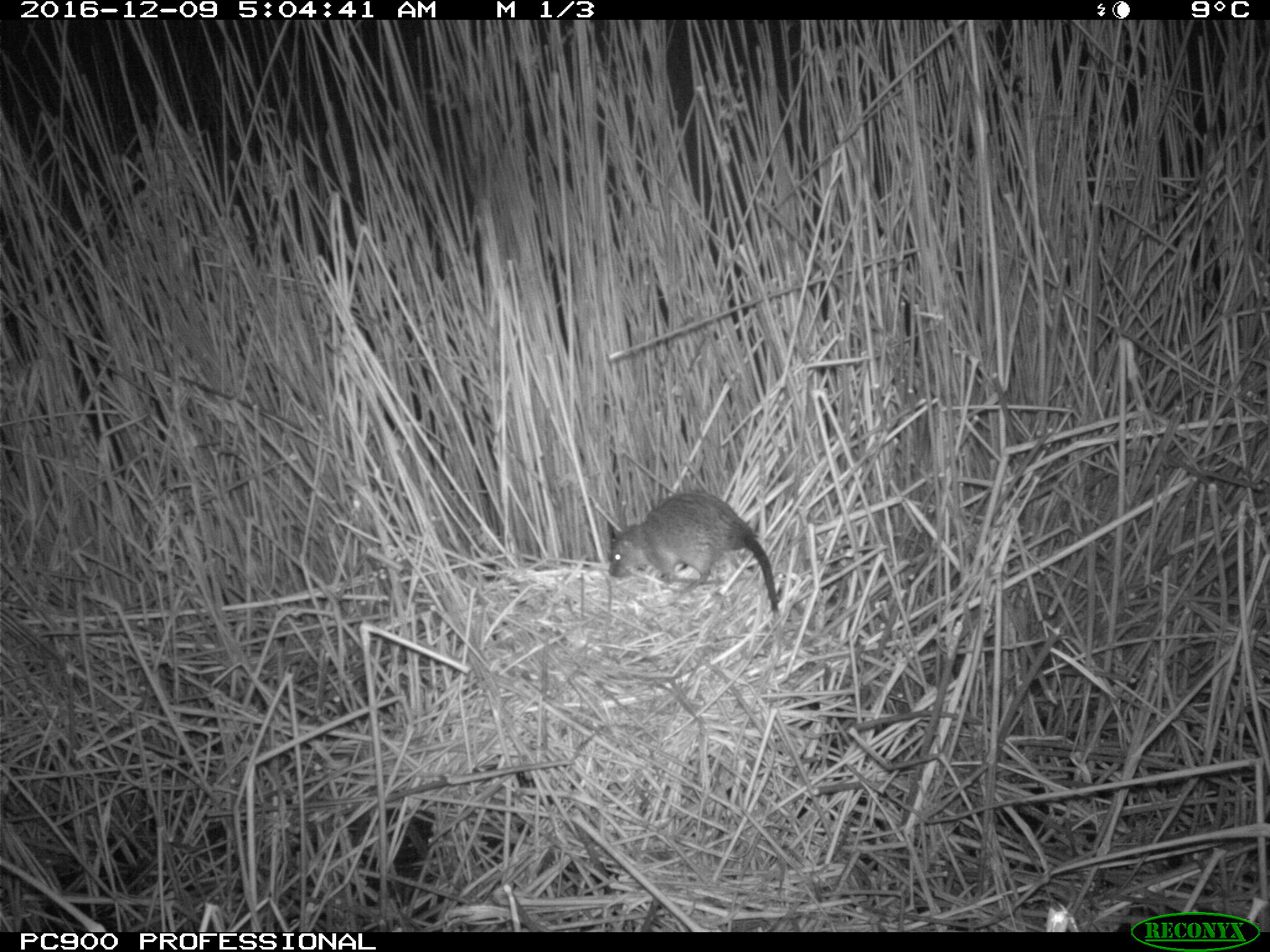 A water rat (Hydromys chrysogaster) on a disused nest caught on camera in the dark hours of the morning. Image credit: CSIRO

How are the monitoring camera images processed?

At the moment, the images are processed by staff and volunteers visually, recording the data in MS Excel spreadsheets.