Its time to get festive with preparations for the 2017 Ningaloo Whale Shark Festival in full swing! 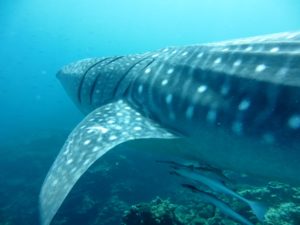 To celebrate this important event, some of the Ningaloo Outlook team will be on hand at Talanjee Oval at Exmouth on the 27th May 2017 …..and then off to get wet and salty!

Dr Rich Pillans from the tagging team will be diving into the clear waters of Ningaloo in June to take forward the whale shark tagging work, which involves attaching tagging technology to allow the movement of these animals to be tracked.  As part of this work, we would like to invite you to give one of these magnificent creatures a name!

No way you say!? Even more, you will be able to follow their journey at seaturtle.org/tracking !

This year, to balance things out a little, we have a slight preference for names to be given to the boys we intend to tag… so if you have some fitting names, either male or gender neutral, then fill in our form below.

Winning names will be announced at the Whale Shark Festival on the 27th May 2017!