Since 2015 the Ningaloo Outlook team led by Mat Vanderklift has been tagging green turtles at Ningaloo Reef. The team have used both satellite tags and acoustic tags and also take important measurements (e.g. weight, sex, length) and samples from the animals (e.g. blood to trace isotopes that can help us to understand food sources). 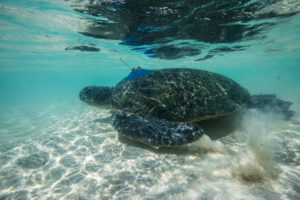 The satellite tags secured to a small number of animals  pings position data to a satellite, which can then be downloaded by the researchers. This near-real time data helps the team gather information on the movements of individuals near and far and how long they spend in different places. Movement data can also be overlaid with habitat maps to help to understand any preferences as well as threats. 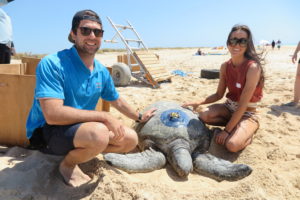 Each year the team involves students from Exmouth School who join the field activities for a day. The activity helps to build capacity and understanding in the local community about these incredible animals and why CSIRO is undertaking the research. This year students from Year 9 and Specialist Science Teacher Susie Bedford joined the team at Ned’s Camp to get sandy!

In addition to students from Exmouth School, members of the Cape Conservation Group a select number of BHP staff who were recipients of an internal Recognition and Rewards award were also given the opportunity to participate!

Giving a female turtle an ultrasound… why? 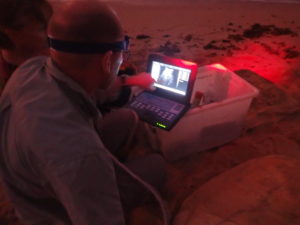 In addition to tagging the turtles, Mat Vanderklift has also started to perform ultrasounds on some of the turtles tagged with satellite tags. Find out more about why at our CSIRO BLOG and from the ABC New Article or listen to our very own Mat Vanderklift at ‘thewire’!

Previous post:
A day out with the Year 10’s at Exmouth learning all about marine habitat classification!
Coming up next:
2019 Ningaloo Outlook Symposium