As part of National Science, researchers from the BHP-CSIRO Ningaloo Outlook project engaged with over 160 students at Exmouth District School. 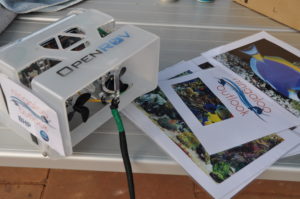 All through the week CSIRO researcher Nick Mortimer, was busy building a remotely operated vehicle, or better known as an ROV, with students from Year 7 to 11. Their ‘build’ was tested in the local pool, along with the opportunity to take CSIRO’s Starbug-X (an Autonomous Underwater Vehicle) for a drive! The Year 9 and 10 students also learnt about calibration, and how water distorts images, and what the process is for scientists to correct for these distortions. Students were exposed to the ‘technology and engineering’ side of  science, highlighting how critical these roles are in the marine science space given this equipment allows the team to explore deeper, more inaccessible areas of the reef.

Susie Bedford (one of Exmouth District Schools Science Teachers) said ‘ The students really enjoyed the activities, it was hands-on and great fun and I will continue to talk about these activities back in the classroom to do more work to look at what the scientists are actually doing as part of the deep reefs research on Ningaloo’ 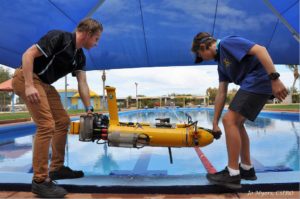 Deploying the CSIRO StarBug-X into the Paltridge Swimming Pool at Exmouth.

On Friday, 18 August, shallow reefs lead Damian Thomson met an excited group of year three and year six students at Exmouth School to learn all about the marine debris at Ningaloo Reef. Students learned about the types of debris that occur on Ningaloo Reef, where this debris may have come from and how long these items may take to degrade in the marine environment. Students learned that reefs and beaches within the Ningaloo Reef World Heritage area are likely to be some of the cleanest in Australia and that as future custodians of the reef, they have an important role they play in helping to maintain these reefs in this clean state. In fact, the message was so well received that on receiving a prize one of the year three students asked: “Mr. Thomson if the plastic is so bad for the reef why have you given me a prize that is made of plastic?”  A sensible question indeed….

The team will continue to show their commitment in providing opportunities to students from EDHS in accessing ‘hands-on’ science activities which are led by real researchers, with students to be involved in turtle tagging activities with Dr Mat Vanderklift later in the year. 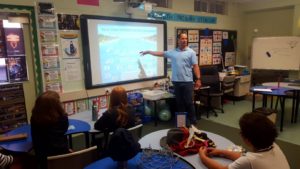