The rust fungus,  Baeodromus eupatorii, infects young leaves and stems of Crofton weed and has great potential to reduce competitiveness, reproduction and spread of the weed. It was approved for release in Australia in May 2014 and has been extensively released across NSW in 2015 and 2016 in partnership with the community. The fungus has also been released in south-east Queensland and on Lord Howe Island. The fungus produces wind-borne spores and thus is expected to naturally spread from sites where it is established and thriving to other Crofton weed infestations. It has however, been affected by drought in the last few years and has disappeared from some sites where it established after the initial releases. As conditions improved, it should gradually recolonise those sites from other areas where it has been able to survive. 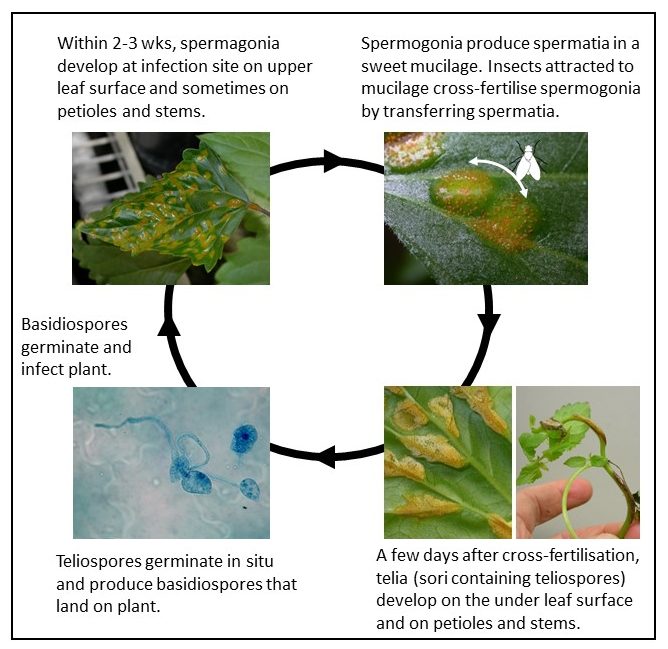 Redistribution of the rust fungus

To enhance natural spread , community members may consider redistributing the Crofton weed rust fungus to sites where it is absent using one of the three methods outlined in these guidelines: 1) potted plants method, 2) layering method and 3) transplanting method, providing they can access a site where the fungus is present.

Locations where the rust fungus was confirmed as established in 2017 can been found under ‘Crofton weed biocontrol’ on the Australian Biocontrol Hub on the Atlas of Living Australia platform: https://biocollect.ala.org.au/biocontrolhub

Monitoring impact of the rust fungus

The easiest approach to monitor the long-term impact of the rust fungus on Crofton weed is to identify a suitable photo-point at the release site and take photos at the time of release and in subsequent years.

Consult the attached document for a guide to establish a photo-point for monitoring: Monitoring-Crofton weed rust fungus