Deb O’Connell is heading to Antarctica with Homeward Bound!

This leadership initiative is aiming to heighten the influence and impact of women with a science background, in order to influence policy and decision making as it shapes our planet.  The inaugural 2016 voyage takes place from 2 – 21 December. 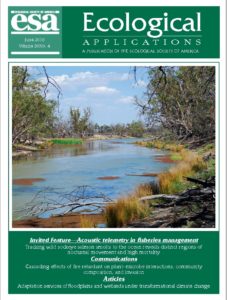 Our paper Adaptation services of floodplains and wetlands under transformational climate change was published on 8 June 2016.

Members of the EAP team are organising a session for the Adaptation Futures 2016 conference in Rotterdam, 10-12 May.

The session commencing at 8:45am on Wednesday 11 May in the Mees Auditorium will be on ‘Applying adaptation pathways practice for resilient and sustainable development’.  The session will bring together researchers and their policy or donor partners from developing countries to:

1) develop lessons for adaptation pathways practice from scientists’ and practitioners’ experiences, and

2) initiate a community of practice amongst researchers, donors, NGOs and government stakeholders.

More on the Adaptation Futures Conference can be found at www.adaptationfutures2016.org

One of our team named amongst world’s most influential scientists

Dr Brian Walker was one of the five CSIRO scientists who were named as some of the ‘world’s most influential scientific minds’ and the most cited authors in their fields by a Thomson-Reuters report based on publication and citation data over the period 2003-2013.