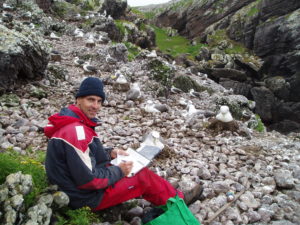 Alistair Hobday in the field

Evidence of population declines as a result of climate change is particularly concerning for threatened and endangered species, which may already be at risk. Iconic marine species will continue to attract conservation attention, and under climate change, intervention may be required to help populations persist. Developing adaptation options for iconic species will be challenging, and so much previous effort has been devoted to reducing non-climate stressors. In some cases, this will be insufficient, and so adaptation intervention is the only alternative to extinction.

Adaptation options in response to climate impact scenarios are first developed based on the IPCC vulnerability framework (Hobday et al 2015). Under this framework, vulnerability to the physical effects of climate change can be reduced by adaptation options that reduce exposure of individuals, reduce the sensitivity of individuals, and increase the adaptive capacity of individual/species to cope with climate change. Options in each vulnerability category are evaluated with three screening tools collectively forming an approach we term sequential adaptation prioritization for species (SAPS), as illustrated in the following table (see – Hobday et al 2015).

These tools evaluate (i) technical aspects (cost-benefit-risk, CBR), (ii) institutional barriers, and (iii) potential social acceptability. The CBR tool identified which adaptation options were high cost and low benefit, might be discarded, and which were high benefit and low cost, might be rapidly implemented (depending on risk). Low cost and low benefit options might not be pursued, while those that are high cost, but high benefit deserve further attention. Even with technical merit, adaptation options can fail because of institutional problems with implementation. The second evaluation tool, based on the conceptual framework on barriers to effective climate adaptation, identifies where barriers may exist, and leads to strategies for overcoming them. Finally, adaptation options may not be acceptable to society at large, or resisted by vocal opponents or groups. The social acceptability tool identifies potentially contested options, which may be useful to managers charged with implementing adaptation options. Social acceptability, as scored by experts, differed from acceptability scored by the public, indicating the need to involve the public in assessing this aspect. Scores from each tool for each scenario can be combined to rank the suite of adaptation options. This approach provides useful tools to assist conservation managers in selecting from a wide range of adaptation strategies.

We have compelling evidence already that that ocean areas occupied by one iconic seabird species, the shy albatross (Thalassarche cauta), are changing. South-east Australia is already one of the fastest warming ocean areas. Many biological changes have already been observed in the region – many fish and plankton species are moving further south and the ocean is now less productive around the breeding colonies. 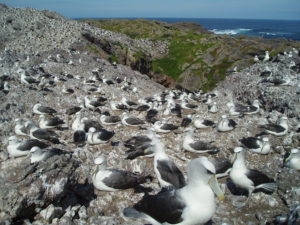 Using the tools described above, we have identified a range of adaptation options shy albatross, which breeds only in Tasmania. These adaptation options are being considered by the management agency, and one option was tested in 2014, with followup tests in 2015. This option involved treatment of disease in albatross chicks, which increased survival of treated chicks by 10% over a six week period (Alderman and Hobday, 2017). Additional testing is now underway to identify the period during chick rearing when treatment is most effective, and in what years (e.g. in wet years, disease prevalence is higher).

Our adaptation interventions are assessed on field trips to the remote Albatross Island colony, and by use of a robotic camera system (Gigapan) which takes a tiled sequence of photographs that are automatically stitched together to form high-resolution panoramas (Lynch et al 2015). The Gigapan system can extend or enhance traditional data collection methods, particularly for simultaneous observations at distance, of the behaviour of surface nesting colonial seabirds and provide high frequency observations of the intervention options at the colony. Some great pictures are shown in this BLOG. 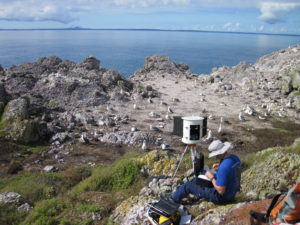 Testing of some adaptation options has begun, yet the albatross population responses will take some time to become measurable. In the meantime, we can test the potential effectiveness of the options using population models, and use these models to explore options with conservation managers. We have developed an age-, stage-, and sex-structured model of the shy albatross population that includes non-climate stressors (such as fisheries bycatch) and environmental variation (rainfall, sea surface height, and air temperature). The model has been parameterised to fit observations of key demographic data, such as the annual number of breeding pairs, survival rates and breeding success. This has allowed relationships to be established with environmental factors that can then be projected into the future under various climate change scenarios and alternative adaptation options. Potential adaptation options include building wind breaks, translocations, building artificial nests, reducing disease and reducing bycatch from fisheries. Each option will vary in its magnitude of benefit and act upon different components of the population demographics (through one or more of chick, juvenile or adult survival, and breeding success). We show how the model is able to estimate the degree to which each of these options improves population status. In some cases combinations of options are necessary to provide satisfactory population rebuilding. Such modelling approach can assist managers when faced with making difficult decisions regarding the sustainability of species threatened by climate change, and allow development of sequences of adaptation options – adaptation pathways.

Scientific and management responses to climate change can be communicated to the public in a range of forms. We have been involved in several extension activities led by DPIPWE seabird research manager, Rachael Alderman.

The first involved artists visiting the albatross colony to draw and photograph eggs, chicks and adults. Between November 2015 and April 2016, the exhibit On Albatross Island (Exhibition opening) was shown at the Queen Victoria Museum and Art Gallery in Launceston, at the Moonah Arts Centre from April -June 2016, and was finally exhibited in the IMAS gallery space.

The second activity was use of the images from the monitoring camera as part of an Expedition class. Students analysed these images of breeding albatross to support learning about the impacts of climate change on this and other marine species.

Other iconic marine species may not be as amenable to direct adaptation intervention. we have recently begun to develop an objective-based and indicator-tuned adaptation pathway for whale management in Tasmania. In collaboration with DPIPWE we are developing “adaptation pathways” to explore future challenges that may require a change in policy, management or research. The first step involved considering how sensitive Tasmanian cetaceans might be to climate change. Preliminary results, based on analysis of life history traits, reveal different sensitivities, with southern right whales at one end of the spectrum, and several dolphins and killer whales least sensitive. The next step is to consider the most sensitive species, and develop a range of options that might assist population viability into the future. These options might relate to policy changes, monitoring strategies, research studies, or even interventions to enhance viability in future.

The deep sea hosts some of the world’s largest, oldest, and most sensitive ecosystems. Climate change and ocean acidification are likely to have severe implications for many deep-sea ecosystems and communities, but what, if anything, can be done to mitigate these threats is poorly understood. To begin to bridge this gap, we convened a stakeholder workshop to assess and prioritize options for conserving legislatively protected deep-sea coral reefs off southeast Australia that, without management intervention, are likely to be severely degraded within decades as a result of climate change. Seventeen possible options were explored using the cost-benefit risk tool (Hobday et al 2015). Options span biological, engineering and regulatory domains and that differed widely in their perceived costs, benefits, time to implementation, and risks. This approach identified the need to urgently locate and protect sites globally that are, or will become, refugia areas for the coral and its associated community as climate change progresses (Thresher et al 2015)

Publications related to work described above: