In regions prone to wildfire, a major driver of ecosystem change is increased frequency and intensity of fire events caused by a warming, drying climate. Uncertainty over the nature and extent of change creates challenges about how to manage ecosystems subject to altered structure and function under climate change.

Using montane forests in south-eastern Australia as a case study, we addressed this issue by developing an ecosystem state-and-transition model based on fire frequency and intensity. In this model, changes in fire frequency are linked to changes in vegetation communities. 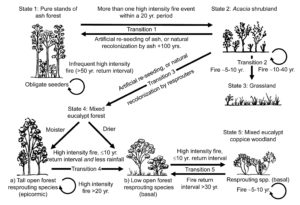 With intense fires recurring at intervals of less than 20 years, it is likely that mountain ash and alpine ash will not regenerate because these trees only reproduce by seed and take about 20 years to become sexually mature. Ash forest is likely to transition to Acacia scrubland. With increasing fire frequency, Acacia scrubland is likely to transform to grassland. In contrast to the ash species, other forest eucalypts regenerate after fire by producing shoots either along the stem or from the base. These ‘resprouter’ species may exist in tall, closed forest configuration or more open woodland communities. 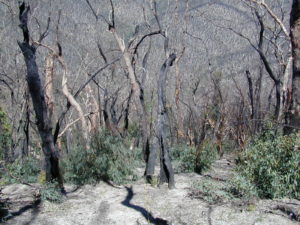 We then undertook an analysis of the interactions between societal values, scientific and management knowledge and institutional rules (vrk) required to reframe the decision context for future management, and determined possible options for an adaptation pathway for management of montane forests under climate change.

Our approach is transferable to other ecosystems for which alternative states can be predicted under climate change.