The longest serving managed aquifer recharge (MAR) operation in Australia was established in the mid-1960s and uses infiltration basins to recharge up to 45GL/yr on the Burdekin Delta, Queensland. In the next few decades, MAR operations were predominantly surface infiltration schemes for agricultural use.

Since the 1990s, there has been considerable progress in MAR in Australia with stormwater and wastewater for urban water supply. See a snapshot of MAR types in Australia in 2017.

Stormwater aquifer storage and recovery (ASR) for non-potable urban water use was first trialled at Andrews Farm, South Australia in the 1990s. Following the success of the Andrews Farm trial, uptake of stormwater ASR has grown in Adelaide to supply approximately 20 GL/yr currently, with potential to increase toward a target of 60 GL/yr by 2050.

Starting as unintentional recharge rather than MAR, stormwater use for drinking water supply via the aquifer has been operating in Mount Gambier, South Australia since the 1880s. Stormwater disposal wells were proven in the 1990s to contribute to the city’s water supply drawn from Blue Lake and will become MAR rather than unmanaged recharge after adoption of risk management plans.

Stormwater contribution to drinking water supply via aquifer storage transfer and recovery (ASTR) was trialled at Parafield, South Australia in the early 2000s, but is not currently an operational scheme. In Perth, recharge of roof runoff and stormwater into pits and basins makes a substantial contribution to the water recovered from wells for household irrigation and also to some mains water supply wells.

Wastewater ASR for irrigation supply was initially trialled at Bolivar, South Australia in the late 1990s. The Bolivar ASR concept has not proceeded to an operational scheme, but it is being considered as water supply option to increase agricultural productivity, while concurrently reducing nitrogen loads discharging to the marine environment.

CSIRO played an integral role in the three-year pilot trial undertaken to evaluate the feasibility of groundwater replenishment to boost drinking water supplies in the future.

MAR has also been applied in mining to manage water from dewatering and to ameliorate environmental impacts of dewatering. Cloudbreak iron ore mine in the Pilbara, Western Australia uses reinjection to manage at least 20 GL/yr of brackish and saline water. MAR is also developing for management of water in the emerging coal seam gas industry in south-east Queensland.

Where urban aquifers have been mapped in Perth, Adelaide and Melbourne, there are known prospects for managing the storage of more than 460 GL/yr urban supplies. Large areas of Australia are likely to have aquifers suited to MAR, but the storage potential has not yet been mapped.

Current research includes the potential for MAR to contribute to water-related development opportunities in northern Australia. 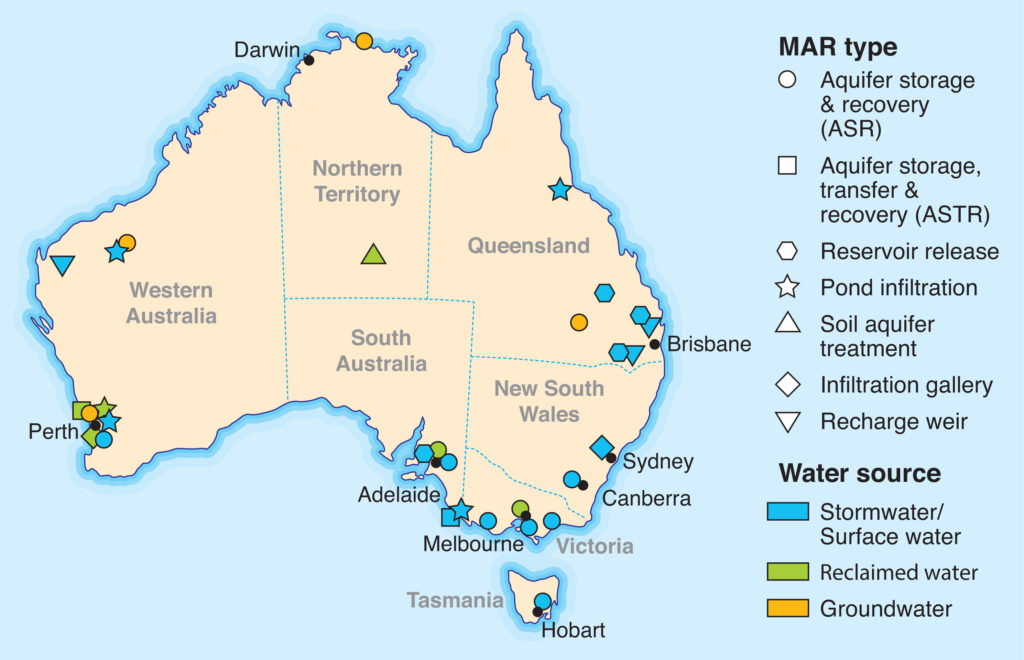 Snapshot of MAR in Australia in 2017. Image: CSIRO