This sub-project focuses on the foliar blight fungal pathogen Venturia paralias (previously referred to as Passalora euphorbiae), which causes severe disease of sea spurge in its European native range.  Comprehensive host-specificity testing was performed in an Australian quarantine facility to assess any risks that the fungus could pose to non-target plant species. Results indicated that the fungus does not pose a threat to non-target species, and thus approval for its release in Australia was sought from the relevant authorities. The biocontrol agent was approved for release in November 2020 and research has since been conducted to develop effective methods for production and field releases. A release program for the agent that is specifically targeting sea spurge infestations in south-east Australia began in Spring 2021.

Gavin Hunter of CSIRO is leading this sub-project. 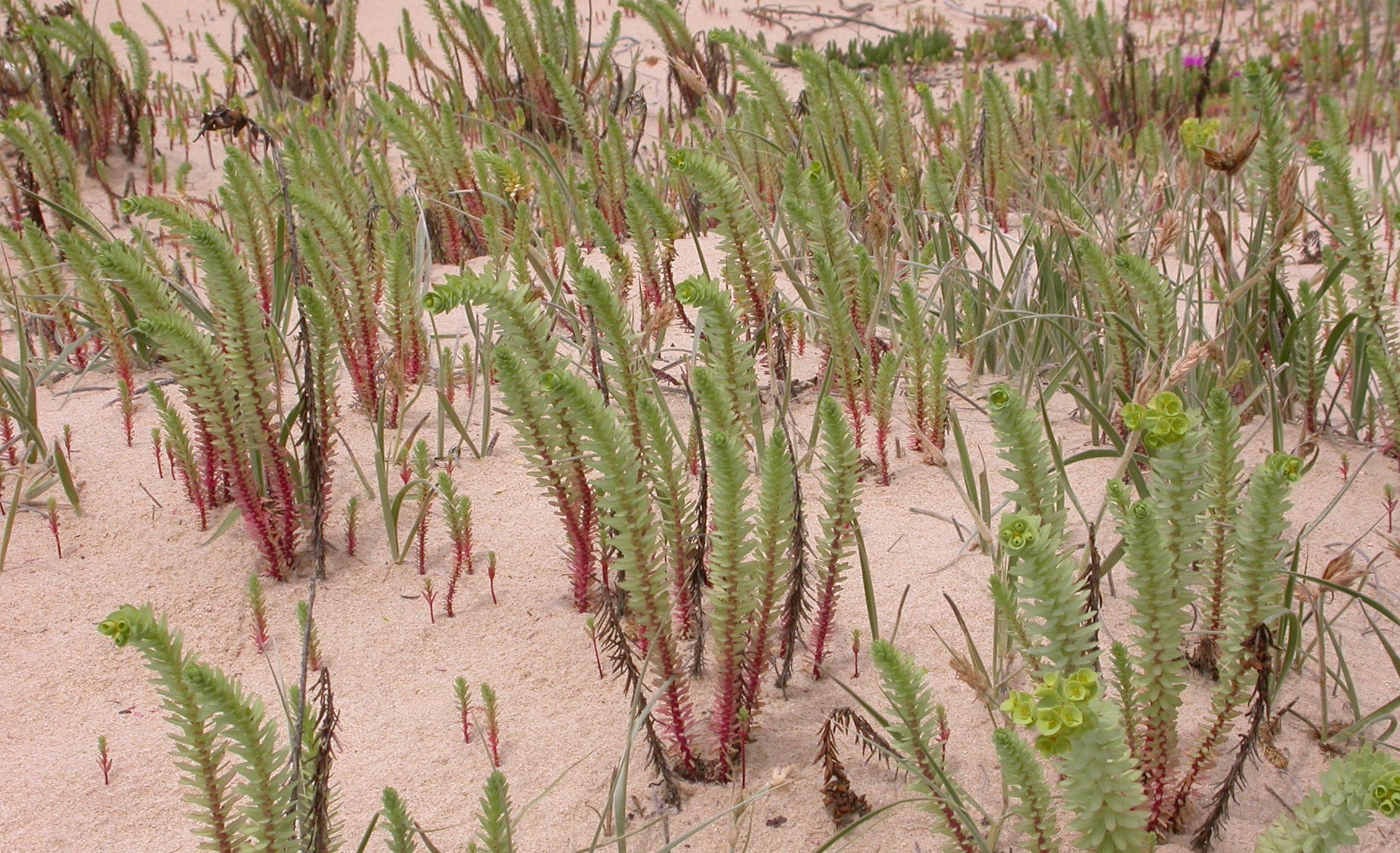 Close-up of sea spurge plants growing on a beach in southern Australia.

Sea spurge is a significant environmental weed of coastal dune ecosystems in southern Australia. Re-invasion from ocean-dispersed seed is a constant threat to achieving long-term control. Along the NSW South Coast, sea spurge keeps re-invading sand dunes and is progressively moving northward. Infestations of sea spurge can negatively affect threatened flora and fauna species and Aboriginal cultural heritage sites, alter the geomorphic processes on the coast, transform native vegetation communities and reduce public amenity in coastal recreation areas. Sea spurge can also cause skin and eye irritations in those who inadvertently touch its milky latex sap. Each plant can produce up to 5000 seeds that can survive for several years on ocean currents – the primary means of dissemination from beach to beach. 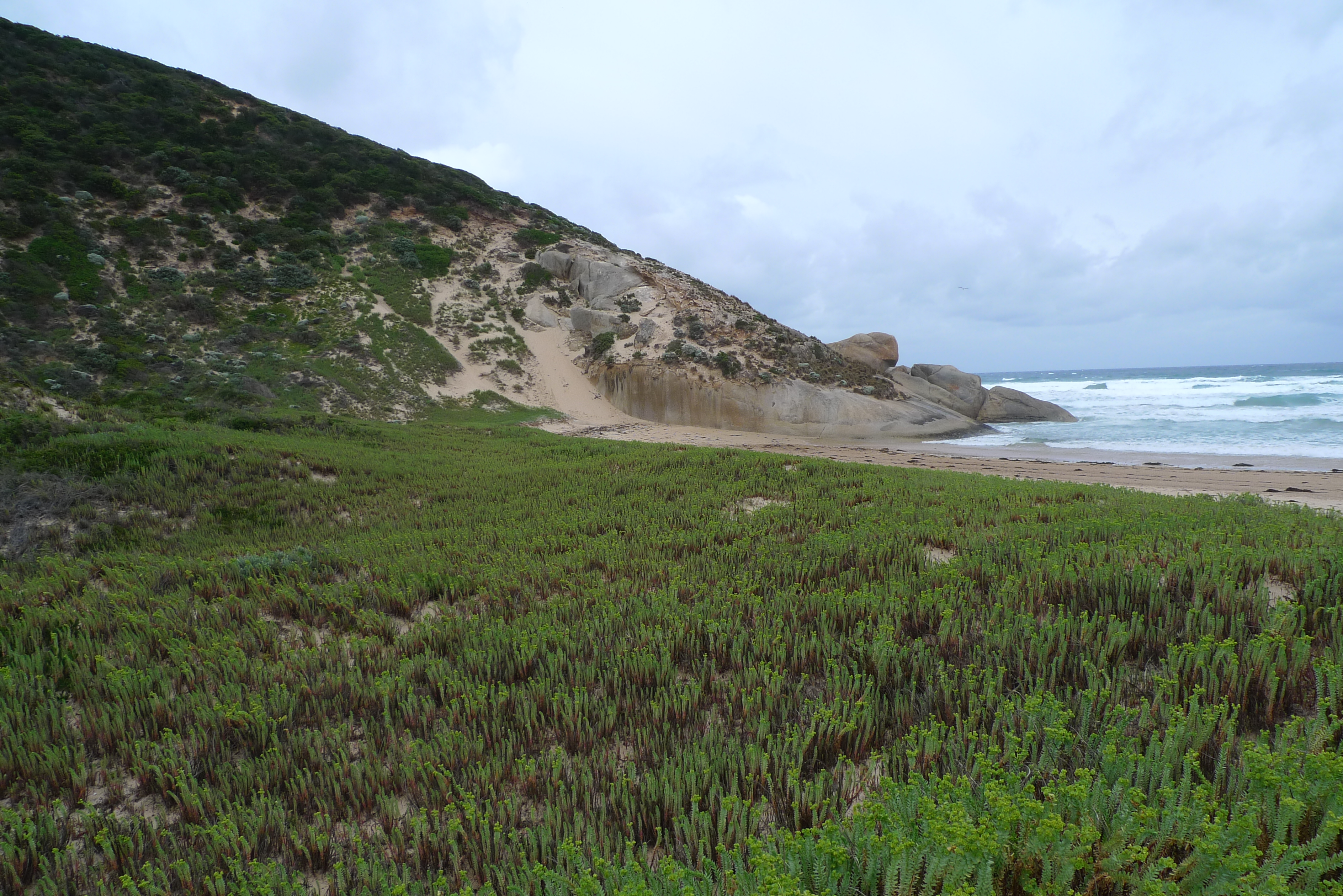 Severe infestation of sea spurge at Wilson Promontory in Victoria: What NSW beaches could possibly look like in the future if no effective solution to control sea spurge at the landscape scale is available.

Control of sea spurge infestations with manual and chemical control techniques is difficult because of the close proximity to estuaries, the marine environment and native vegetation, its persistent seed banks, and constant re-invasion from beaches within and outside of NSW. Government agencies and local community groups devote large amount of time controlling it, but ongoing efforts are required because of the established seed bank and the relentless re-invasion that occurs.

Hand pulling of sea spurge is popular with community groups, as it requires no special training, costs little, and avoids exposing community members to chemical herbicides. It can be quite effective for small populations less than a few thousand individuals. The incomplete removal of the plants’ roots however, can lead to their re-establishment. Even when plants are completely removed, recruitment of seedlings from the seed bank can occur for up to ten years. The application of herbicides is popular with land management agencies (parks, local councils or NRM organisations). While often effective in reducing large populations of sea spurge, herbicides can cause off-target damage to sensitive native coastal vegetation and aquatic and marine ecosystems.

The hardiness, mobility and longevity of sea spurge’s seeds in combination with the remote locations of many infestations, make management of sea spurge in southern Australia difficult using currently available control methods. Biological control would provide a sustainable, landscape scale approach for sea spurge management with no chance of off-target damage. A successful biocontrol program across the range of sea spurge in Australia would reduce the density of populations and seed production, thus reducing spread via ocean currents and infestation of new beaches. A substantial improvement of biodiversity outcomes would be expected from a progressive reduction of the number of beaches invaded by sea spurge as a result of biocontrol and the commensurate recovery of dune habitats for native flora and fauna.

Due to its importance as an environmental weed, sea spurge was nominated and endorsed by the national Invasive Plants and Animals Committee (IPAC; now known as the Environment and Invasives Committee) as a target for biological control in Australia in August 2010.

In previous projects supported by the Tasmanian government and the Rural Industries Research and Development Corporation (RIRDC; now known as Agrifutures Australia), two damaging fungi with potential for biocontrol – the foliar blight fungus Venturia paralias (previously referred to as Passalora euphorbiae) and the rust fungus Melampsora euphorbiae – were discovered on sea spurge during field surveys in France and Spain. Initial tests, performed at the CSIRO European Laboratory in France, indicated that the two pathogens may be promising candidate biocontrol agents for sea spurge in Australia (Scott et al. 2010, 2012). Out of 15 non-target species tested with the rust fungus, only Euphorbia marginata and E. dendroides developed disease symptoms, albeit not as severe as those on sea spurge. Preliminary testing with the fungus showed that it is possibly highly specific. It was tested on eight Euphorbia species, but none were native to Australia. It was also tested on two species in the sub-family Acalyphoideae and one species in a related family to Euphorbiaceae. In all tests, disease symptoms only developed on sea spurge. The damage caused by the fungus on sea spurge in the field is impressive in the native range (M. Jourdan pers. comm.). 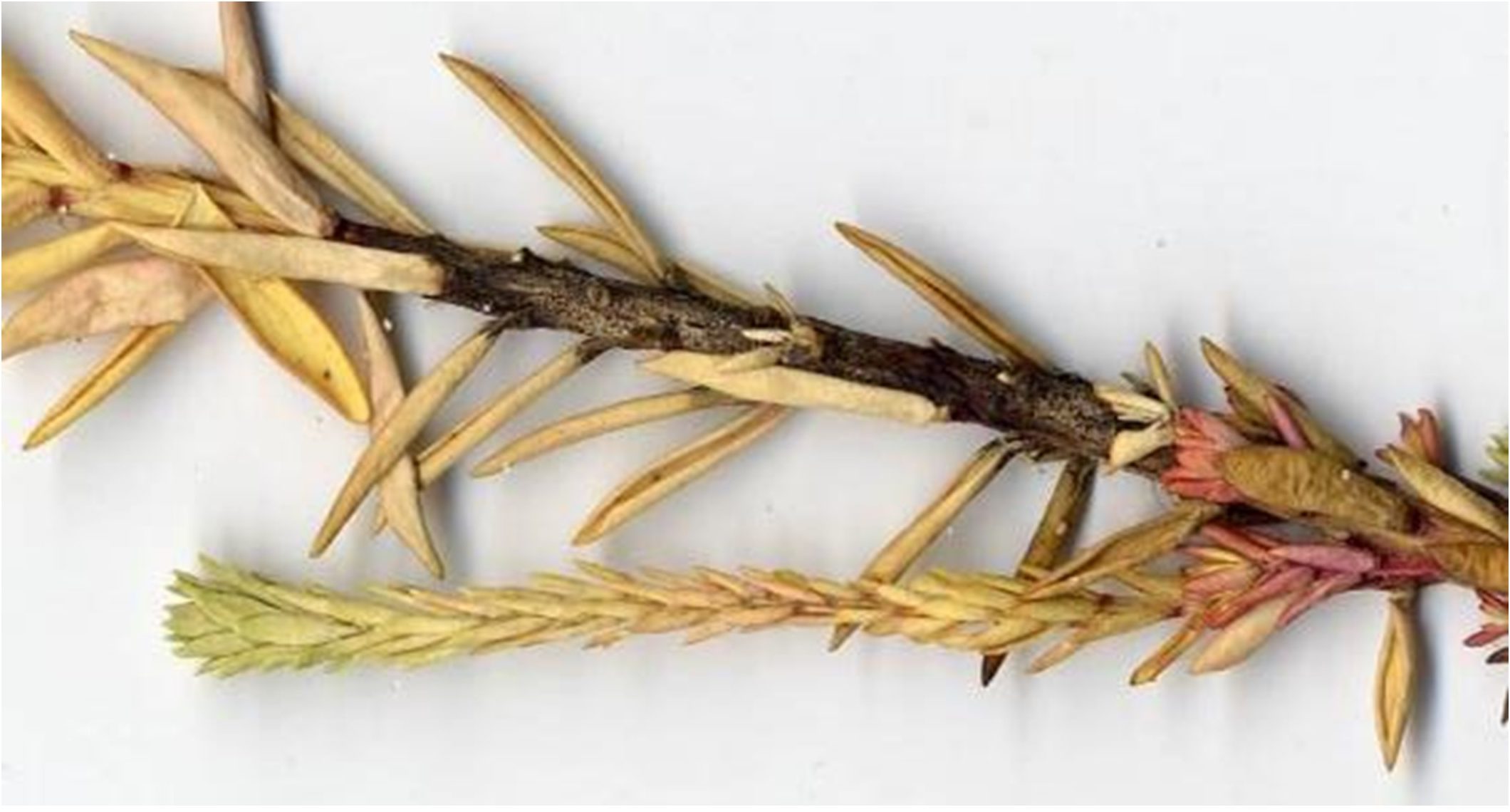 Severe stem lesion, caused by the fungus Passalora euphorbiae (recently described as Venturia paralias), observed on sea spurge at a site in France.

Baseline data on  sea spurge growth, phenology and reproductive output, and impact on native vegetation were gathered in 2011-12 at sites in WA and Victoria (Scott et al. 2012). A recent Honours thesis at Wollongong University (Kelly 2015), indicated that sea spurge is or has been present at 309 of the 481 beaches (64.2%) assessed in NSW based on information gathered from land managers, management documents and field surveys.

The foliar blight fungus Venturia paralias (previously referred to as Passalora euphorbiae) was selected as the most promising candidate agent of sea spurge to pursue for the sub-project supported by the NSW Environmental Trust because it:

In November 2020, Venturia paralias was approved for release in Australia.

In this phase of the sub-project, releases of the approved biocontrol agent will be occurring in sea spurge infestations in regions of Tasmania and Victoria that are the source of recurrent infestations in NSW due to seed dispersal on ocean currents. Various agencies and groups, such as Coastcare, Landcare Australia, Landcare Tasmania, Parks Victoria, Tasmanian Parks and Wildlife Services, Cradle Coast Authority, Great Ocean Road Coast and Parks Authority, and the Sea Spurge Remote Area TeamS (SPRATS) volunteer group, in these states have committed to provide in-kind support to the sub-project.

Three different approaches to produce the sea spurge biocontrol agent, the fungus Venturia paralias, for field releases were tested. The most efficient method was to produce sporulating cultures of the agent on agar medium in plates and drying the cultures at room temperature for 24-48 hrs and storing at 4°C until ready for use.

Up to six different methods for releasing the agent were tested across the three sites. The release methods that involved spraying spore suspensions made from fresh and dried cultures of the agent resulted in more stem lesions developing than any of the other methods tested. 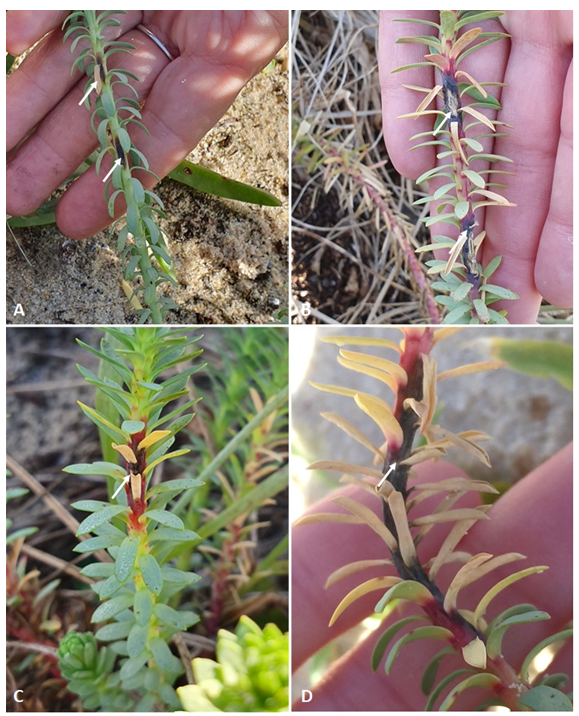 Cultures of the fungus Venturia paralias (previously referred to as Passalora euphorbiae) stored since 2009 at the CSIRO European Laboratory in France, were imported in the CSIRO quarantine in Canberra in October 2017. A robust and reliable methodology for host-specificity testing has been developed by optimising the culturing, inoculation and assessment protocols. Propagating material for 40 non-target plant species of the test list (76 different accessions) were sourced and successfully propagated. The test list comprised species across the families Euphorbiaceae, Picrodendraceae and Phyllanthaceae. 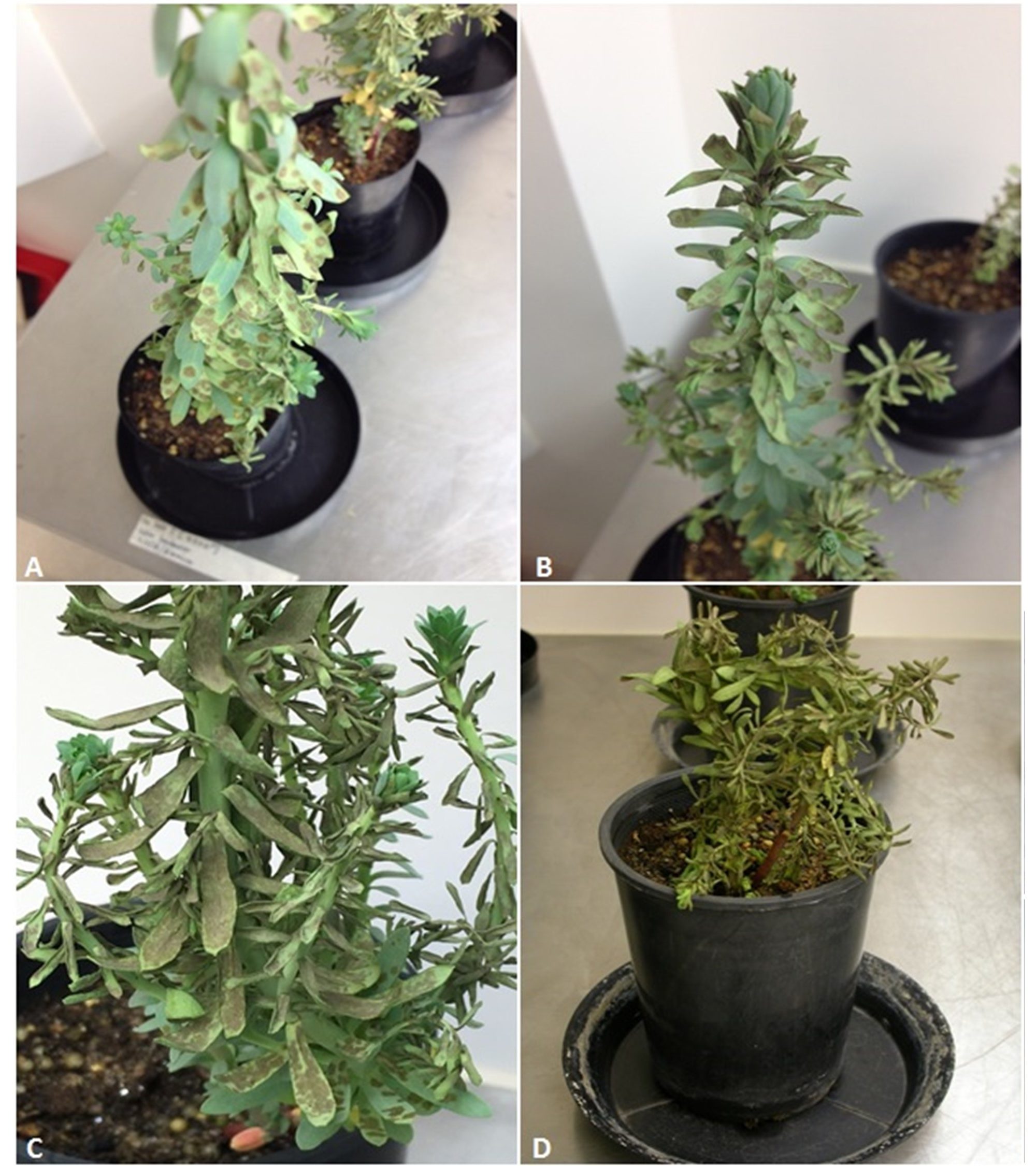 Sea spurge plants infected with Venturia paralias (previously referred to as Passalora euphorbiae) at 30 days after inoculation. Plants inoculated with 97 000 spore/ml (A, B) and 600 000 spore/ml (C, D).

Results of host-specificity testing indicated that the fungus can only severely damage sea spurge. Visible necrotic lesions developed 11-12 days after inoculation of sea spurge and prolonged disease progression allowed the fungus to move from infected leaves to stems and girdle them, leading to eventual stem collapse and toppling of plants. The fungus only caused leaf lesions, albeit restricted, on one non-target species, Euphorbia segetalis, the most phylogenetically related species to sea spurge. This species is naturalised in Australia and recorded as an environmental weed, although it is very uncommon. The fungus was also capable of penetrating leaves and developing a few subcuticular amoeboid primary hyphae on Euphorbia myrsinites, Euphorbia helioscopia and Mercurialis annua, but these did not develop any further. On all other non-target species tested, conidia germinated on leaf surfaces and germ tubes formed appressoria, but the fungus was never observed to penetrate or proliferate inside leaves.

The assistance of Isabel Zeil-Rolfe, Caroline Delaisse and John Lester of CSIRO is acknowledged.

Thanks to all collaborators who 1) kindly made collections of sea spurge accessions in Australia and some of the non-target plant species included in host-specificity tests, and 2) assisted with field releases of the agent in Australia.