In order to cope with the dramatic growth of data traffic in wireless cellular networks, mobile network operators deploy more and more small cell base stations (SBS) to cooperate with traditional macro cell base stations (MBS) in recent years. This resulting network with a mix of SBSs and MBSs is referred to as heterogeneous cellular networks (HCN). HCNs help to improve the spatial spectral efficiency of the network and have attracted significant attention from both academia and industry. In the 5th-generation (5G) system, the density of SBSs may even increase to a level to be comparable to the density of mobile users.

A main reason driving the growth of data traffic is the dramatic-increasing streaming of video on demand files. In the next five years, on-demand video streaming may increase by two orders of magnitude. To cope with the challenge of on-demand video streaming, the idea of caching contents in advance has been proposed. That is, video files are transmitted to and stored in the networks during the off-peak time. Then the users can download the files at the peak time.

Various caching strategies are proposed and analyzed recently, for instance, FemtoCaching, device-to-device (D2D) caching and caching in social networks. FemtoCaching utilizes the SBSs (e.g., femto cell base stations, WiFi access points) in HCNs to cache the video files, using the storage capacity of SBSs to augment the backhaul capacity in the network. The high deployment density of SBSs and their short distances from mobile users, provide good basis for the storage and transmission of files. Compared with D2D caching where the files are stored in mobile users, FemtoCaching has the advantage of open access and sufficient power supply. 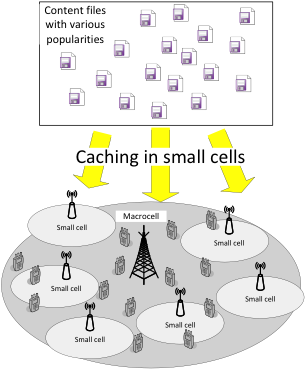 Illustration of the random caching

To find the optimal caching strategy for random caching in the sense that the successful download probability of cached files from small cells is maximized.