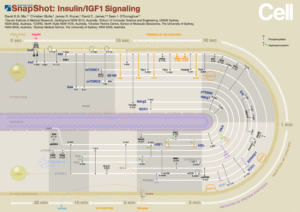 Minardo is a novel layout strategy — a reference to Charles Joseph Minard’s graph of Napoleon’s march — encoding the cell topology stretched out over time in a ‘circtangle’. Using this strategy, we produced a Cell SnapShot of the insulin signalling pathway encoding large-scale phosphoproteomics data with high dimensions. This layout facilitates exploration, identification of triggers and aids in understanding the cascade of biological events by displaying all time points in one graph.

In its current stage, Minardo is a layout strategy to visualise large-scale cell signalling data with time profiles applied to the time-series data on insulin response. This strategy is adaptable and can be applied to a multitude of cell signalling data. In future work, we plan to turn Minardo into a web-based application tool, allowing interactive visualisation and easy collaboration.

Previous post:
Provenance
Coming up next:
Versus – A web-based tool to create experiments based on a 2AFC methodology