The CSIRO Face Analysis SDK contains a number of useful components
that can extract and utilise the geometry of the face found in
video. The SDK includes a real time non-rigid face tracker and an expression transfer module that can animate an avatar using the
expression of a user.

The software development kit (SDK) consists of a collection of command line programs that cater for the common use cases and an application programming interface (API) to accommodate third party applications.

The current implementation fits a deformable 3D model to pixels using
an improved version of the Deformable Model Fitting by Regularized Landmark Mean-Shift algorithm. This algorithm returns 66 2D image
landmarks, their corresponding position in 3D as well as the pose of
the head for each successful detection. The implementation also
includes a failure detection component in order to improve robustness.

The expression transfer component is capable of transferring the shape
and appearance of an individual to an avatar. The algorithm performs
this transfer using a semantic mapping in order to preserve the
geometric identity of the avatar. This strategy resulted in more
visually appealing animations when compared with animations produced
using a direct geometric transfer i.e. the avatar’s shape is identical
to that of the user.

The only information required to initialise the semantic mapping is a
sample of the user displaying a netural expression. This sample can be
easily obtained at run-time using the non-rigid face tracker
component.

The SDK requires the following software to be installed in order to
build and execute:

Building the software requires some familiarity with the Unix command
line. Instructions for Microsoft platforms will be provided in a
future release of the SDK.

The first step to building the SDK is to download the source code from
the CI2CV website. The source code is provided as an archive and can
be extracted using the following command

The build process for the SDK requires knowing the paths to certain
libraries, programs and header files. Discovering this information is
performed by CMake using the following commands.

The SDK includes a demonstration program of the face tracker and
expression transfer components. This program is not built by default
as it is not a critical component of the SDK and it avoids having to
install the Qt GUI framework. If you wish to build this component, you
must specify the option -DWITH_GUI when invoking cmake above.

The default values used by the SDK should be sufficient for most
systems, however, if you experience difficulties then there are a
number of [options] to cmake that aid the configuration
process. Valid [options] are

-DOpenCV_PREFIX=/opencv/prefix
Installation prefix for OpenCV.
-DFFMPEG=/path/to/ffmpeg
The path to the ffmpeg executable.
-DBASH=/path/to/bash
The path to bash. (Important on systems
where /bin/sh is not BASH. e.g. FreeBSD)

When CMake has successfully configured the project, issue make.

This section outlines the non-rigid face registration program
face-fit. This program can perform fitting on a single image, a
sequence of images or video.

The following command executes the fitting algorithm on a single image
and visualises the results.

The resulting landmarks can be saved to file by specifying an output
pathname as a command line argument.

The next command performs tracking over a sequence of images.

The argument <image-lists> is a file containing a list of image
pathnames with each pathname separated by a new line. The argument
[landmarks-list] is a list of pathnames to save the landmarks to. If
landmarks-list is not specified, then the fitting results are
displayed on the screen. Users should be aware that only successful
registrations are saved to file.

The --video switch enables face-fit to perform fitting on a video.

Like the other modes, landmarks are only written if tracking was
successful.

More functionality of the face-fit algorithm can be obtained from
its usage text.

This section illustrates the expression-transfer program which is a
front end to the SDK’s expression transfer API.

The command line arguments accepted by the expression-transfer
program are

The arguments <calibration-image> and <calibration-landmarks>
represent the data needed to calibrate the semantic mapping between
the individual and the chosen avatar. The calibration data must be an
exemplar of the individual displaying a neutral expression.

The arguments <image-argument> and <landmarks-argument> represent
the expression to be transferred to the avatar and the argument
<output-argument> specifies where to save the rendered avatar. How
this information is interpreted changes depending on the mode of the
expression-transfer program.

The default mode is to synthesize a single image of an avatar and save
it to file.

If you specify the switch --lists, the arguments <image-argument>,
<landmarks-argument> and <output-argument> now correspond to lists
of pathnames.

The avatar used in the above examples is the default avatar delivered
with the SDK. Other avatars can be selected using the options
--index and --model.

Viewing or choosing an avatar for the expression-transfer program
can be performed using the program display-avatar.

If [model-pathname] is not specified, then the default model
pathname is used.

You can change avatars by pressing the a and d characters
keyboard. The left and right arrow keys can be used as well. When the
avatar changes, a number will be printed to the console. This number
can be used as the argument to the --index option for the
expression-transfer program.

The program create-avatar-model is used to create a new model file
that can be used by the Face Analysis SDK.

The argument <output-model-pathname> is the location of the new
avatar model containing the avatar defined by the arguments
<avatar-image>, <avatar-annotation> and [eyes annotation].

The following diagram displays the landmarks that should be stored in
the <avatar-annotation> pathname using the points file format. 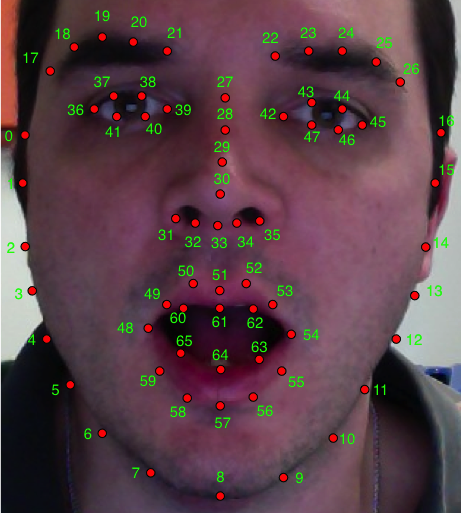 The [eyes annotation] argument provides the ability to draw the eyes
of the avatar with the same gaze as the user. This pathname should
contain the following annotations using the points file format.

It is safe to not specify the [eyes-annotation] argument for cases
where the avatars are wearing glasses.

The create-avatar-model program provides a --list switch to allow
the creation of an model file containing more than one avatar. In
--list mode, the arguments <avatar-image>, <avatar-annotation>
and [eyes-annotation] are files containing lists of pathnames.

A GUI application, called demo-application is included with the
software which demonstrates the tracker and expression transfer
components simultaneously. 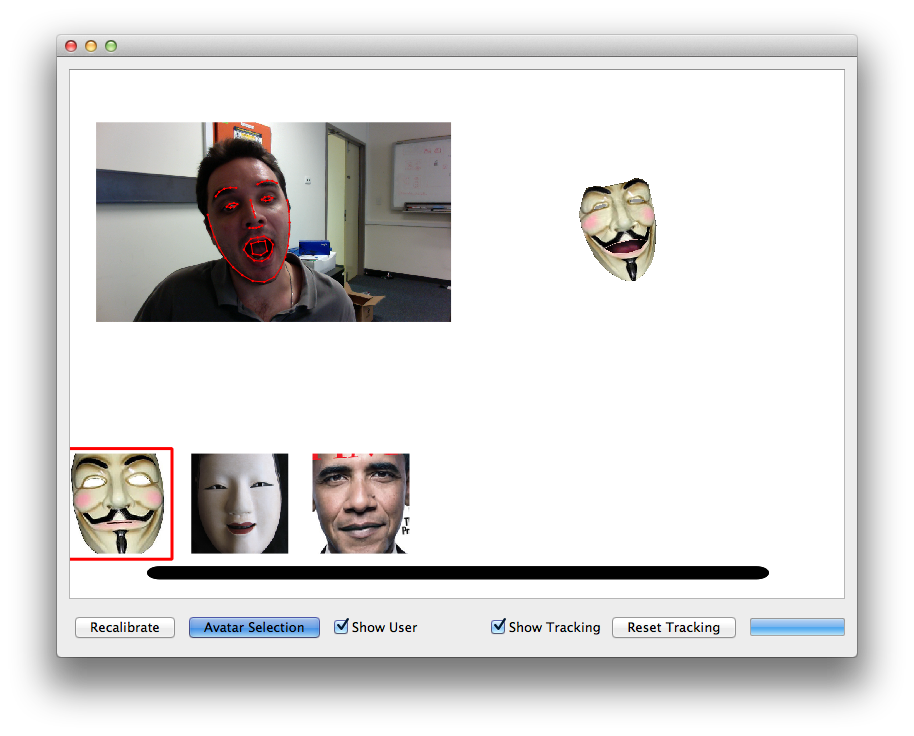 where the argument <index> selects the camera to use. The order of
the cameras is determined by OpenCV and the first camera has an index
of 0.

On OSX, a drag and drop installer for the application can be built by
issuing the following in the <build> directory.

The above command can only be executed after the SDK has been built.

This section outlines how to integrate the CSIRO SDK in to third party
applications.

The non-rigid registration algorithm can be used in third party C++
applications by including the FACETRACKER namespace.

The tracking interface is provided by the abstract base class
FaceTracker. Instantiating a new instance of this class is performed
by the LoadFaceTracker function

This function returns NULL if the face tracker cannot be loaded.

This function returns NULL if the tracker parameters cannot be loaded.

The methods implemented by the FaceTracker class are as follows

The method NewFrame performs tracking on a grayscale image using
the tracking parameters params. Its return value is an integer value
between 0 and 10 (inclusive) or one of the constants

When the tracking quality is poor or the tracker has failed, an
application must reset the tracker using the Reset method.

The expression transfer algorithm can be used in C++ applications by
including the AVATAR namespace.

The interface used to perform expression transfer is provided by the
class Avatar.

An instance of the Avatar class can be created with the function
LoadAvatar().

The method Animate renders an avatar displaying the expression found
in image with the corresponding shape. The resulting rendering is
stored in the matrix draw.

Prior to calling Animate, an avatar must have been chosen using
setAvatar. With the avatar chosen, the Avatar instance must be
initialised using Initialise. Initialisation requires an image and
shape corresponding to the netural expression of the individual that
is being used to animate the avatar. This procedure must be followed
every time the avatar is changed.

A std::runtime_exception is thrown if either function is unable to
perform its task.

The programs used in this library make extensive use of point files or
landmark files. These files commonly have the extension .pts. The
format of this file is intended to be very simple.

This is an example of a points file:

The first line of a points file contains the number of points N in
the file. The region between the braces { and } contains the N
points with each point starting on a new line. The text for the point
is simply two floating point numbers.

This section outlines a number of utility programs which are bundled
with the software.

The reason for this is that this structure makes it very convenient to
operate with lists of data when coupled with the map-list program.

Lets assume that the file a.list contains a list of numbers

and the file b.list contains a list of strings

The usage string for map-list is

The argument <N> specifies how many lists are specified on the
command line. The <N> lists must immediately follow. The argument
<command> represents the command to be executed, and [command arguments] will appear on the command line before the items obtained
from the lists.

Another example using the above data is

If one of the list arguments is the text -, then the list is read
from the standard input rather than being read from file. It is safe
to use - multiple times. This indicates that the list read from
standard input is used more than once.

Complementing the map-list program is change-pathnames. Its
purpose is to take a list of pathnames and create a new list with the
pathnames changed to have either a different directory, extension or
both.

For example, the file input.list contains the following list of pathnames

The program remove-rotation-metadata is required to overcome an
issue with OpenCV where its cv::VideoCapture class does not honour the
rotation parameter embedded in some video containers. This problem
typically occurs when working with video obtained using a portable
device. The program remove-rotation-metadata creates a new movie
without the rotation parameter.

It may be required to rotate the video once the rotation metadata is
removed. This task can be performed using the command rotate-movie.

The program extract-frames-from-movie converts a movie to a sequence
of images and create-movie-from-frames uses a sequence of images to
create a movie.

All of the above programs simply invoke FFMPEG with the required
options and arguments.

Please ensure that your CPU supports the specified instructions before
enabling them otherwise the compiler will produce binaries that cannot
be executed.