The following is an overview of some key findings and trends from our camera nest data and satellite tracking data so far. Our data analysis is ongoing, so watch this space for further updates on our findings…

Satellite tracking movements and habitat use

Northern (birds from the Macquarie Marshes) and southern birds (Barmah-Millewa Forest, Kerang Lakes, Kow Swamp) are mixing and using some of the same sites and routes. It’s unknown whether straw-necked ibis within Australia are one integrated population or geographically different populations. The 2016-2017 breeding season may be considered unusual with the extent and duration of flooding that occurred in eastern Australia; this will need to be investigated with satellite tracking in subsequent years and with more birds.

Common ‘flyways’ or long-distant routes for different individuals and species

The same northeast-southwest route was used by both our 2016-2017 cohort and 2017-2018 cohort of tracked straw-necked ibis juveniles and adults. This route was also used by juvenile and adult royal spoonbills. The route was used in both directions and from different sites. Birds are avoiding areas that are dry, are highly elevated or are forested; this route also corresponds with climatic/bioregional zones. 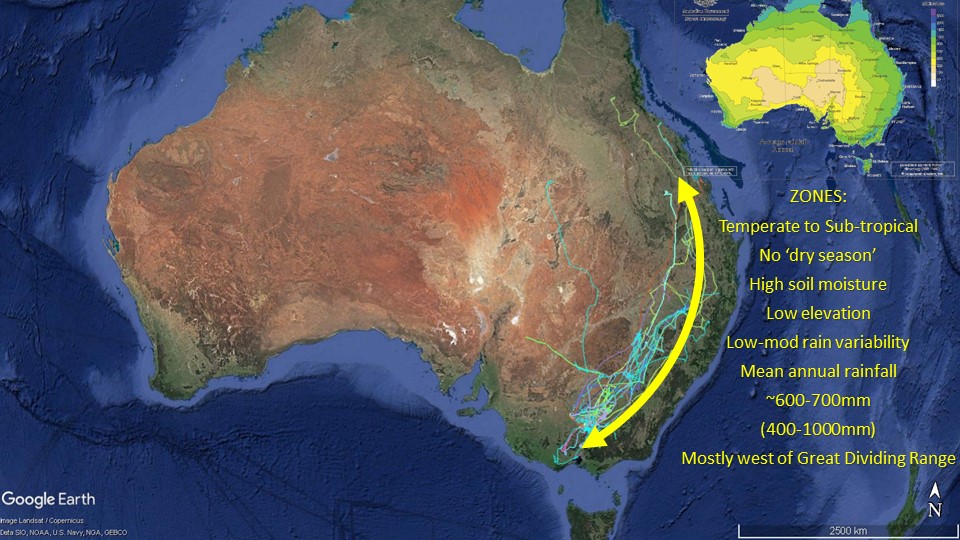 Satellite imagery showing the general direction of movement of all tracked birds (coloured lines); a northeast-southwest route is evident which corresponds to average climatic boundaries such as average annual rainfall (climatic map on right). Images: CSIRO & Bureau of Meteorology 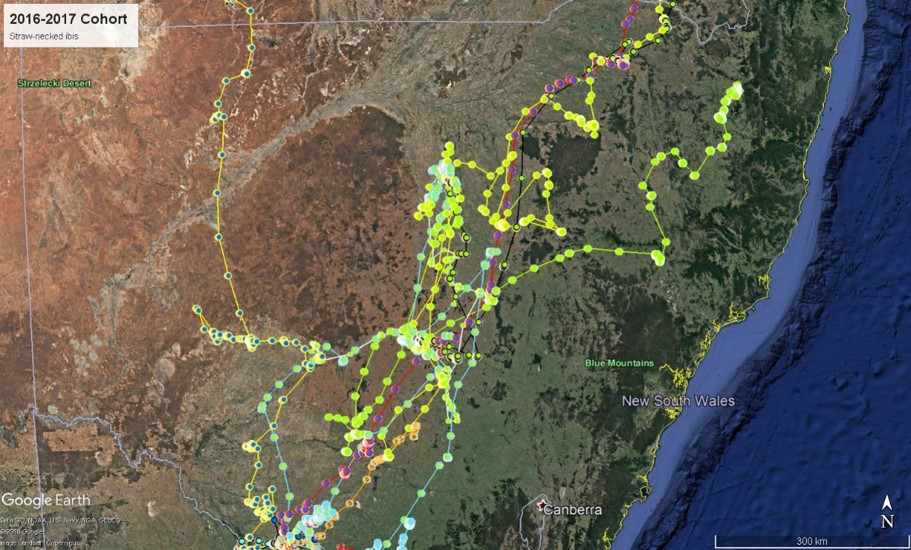 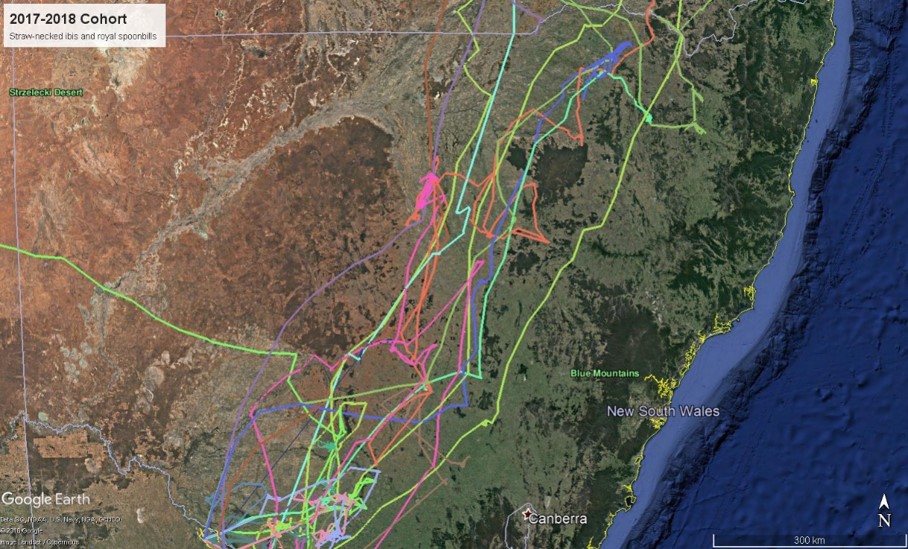 Comparison of movements over NSW of the 2016-2017 cohort of satellite tracked straw-necked ibis (top image) and 2017-2018 cohort of satellite tracked straw-necked ibis and royal spoonbills (bottom image). Each colour represents an individual bird with the line showing the general route taken by that bird. The general routes and directions of birds is remarkably similar between cohorts. IMAGE: CSIRO

Some individuals are nomadic..

Other birds have not undertaken deliberate long-distant movements, rather they have wandered back and forth between sites. It is thought that this nomadic movement may be an opportunistic response to changing resources (ie. food and water) in the landscape. 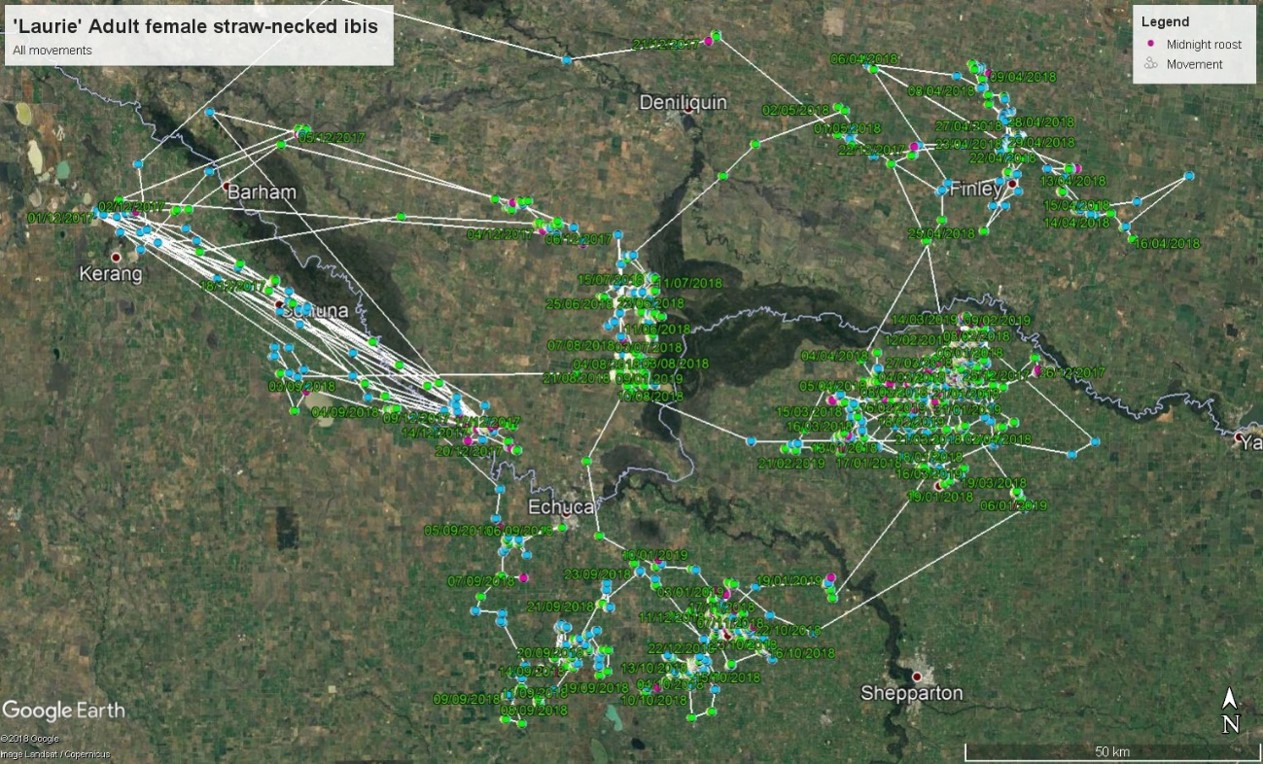 While others are sedentary..

Some of our birds have stuck in the same general area, regardless of the season or time of year, and have been intensively re-using sites for foraging and roosting. We consider these birds to be sedentary compared to those making deliberate long-distance movements or wandering nomadically in search of resources. 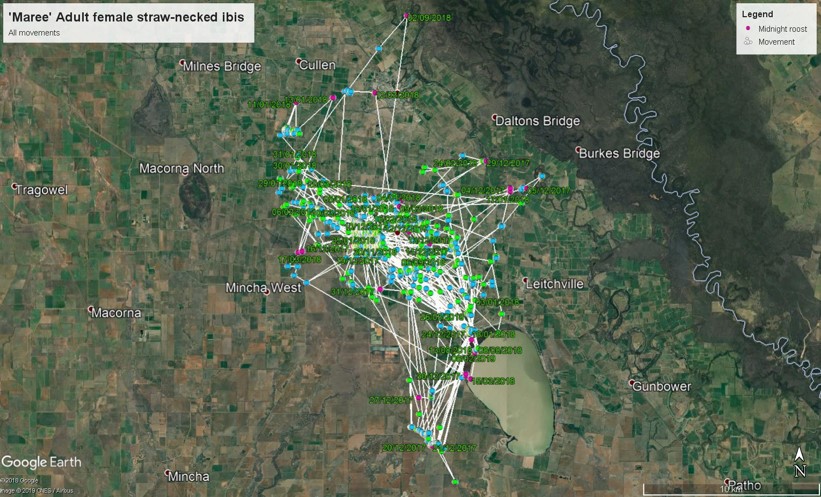 Maree, an adult straw-necked ibis, has stayed in the same area for over a year since being tracked from Kow Swamp (waterbody west of Gunbower on map). She has a clear home range of less than 40km and her foraging locations during the day (blue and green dots) are highly concentrated to an area northwest of Kow Swamp. IMAGE: CSIRO

Different birds have been using the same sites to forage and stopover at different times. Some birds have also returned to sites or ‘re-used’ sites. This has been apparent in the mid-Lachlan River near Condonblin, NSW (see satellite image below). 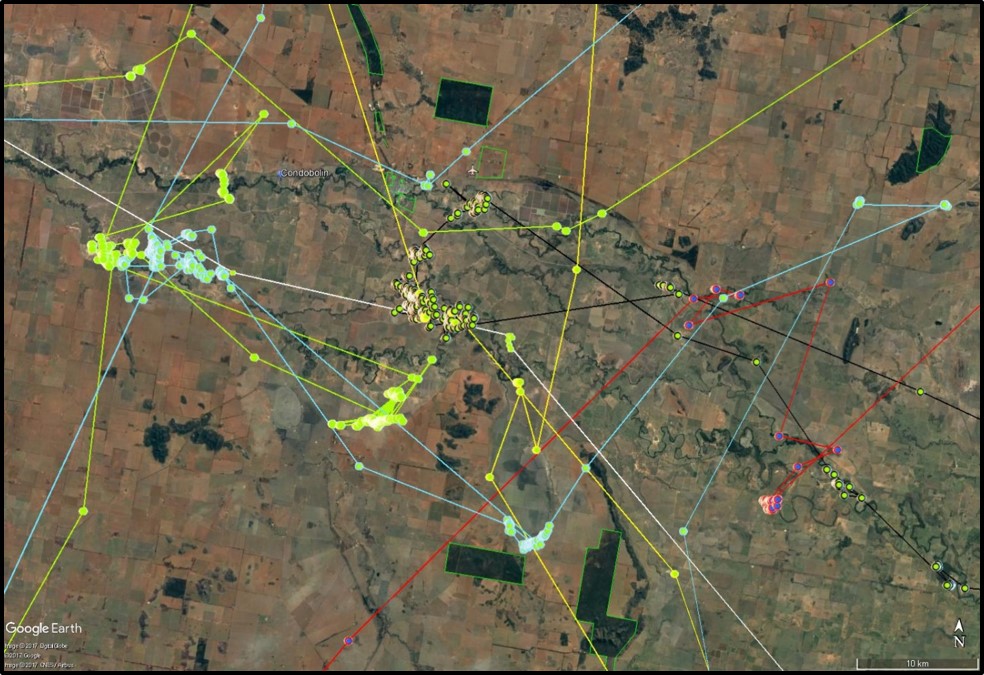 Satellite imagery of the mid-Lachlan River near Condoblin, NSW, showing the stopover points of six birds (coloured dots). Lines between points indicate the bird’s sequence of movements. The sites being frequented are a mixture of native and agricultural land, and wetland and dryland habitats. Image: CSIRO

‘Paired’ habitats for roosting and foraging 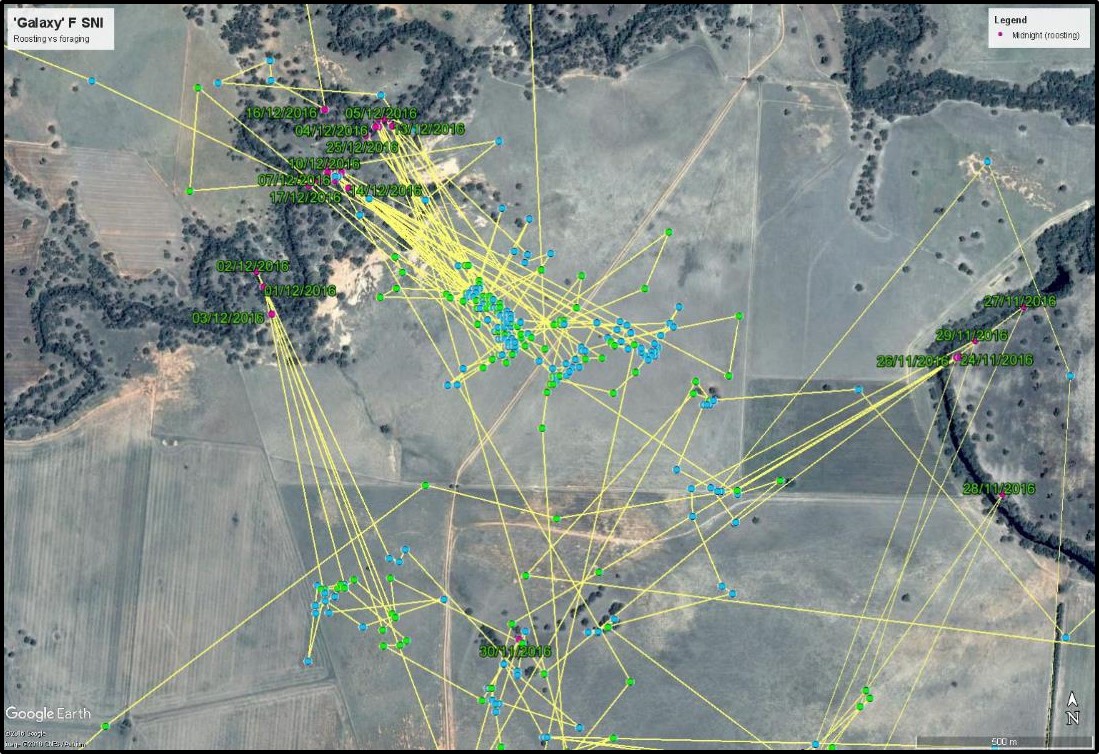 Movement associations with weather and season

Nesting habitats differ within and among sites and species

In Barmah-Millewa Forest and parts of the Macquarie Marshes, both Australian white ibis (Threskiornis molucca) and straw-necked ibis (Threskiornis spinicollis) prefer to nest in tall common reed (Phragmites australis). Both prefer reed beds with ‘water views’ in the centre of regularly inundated wetlands. 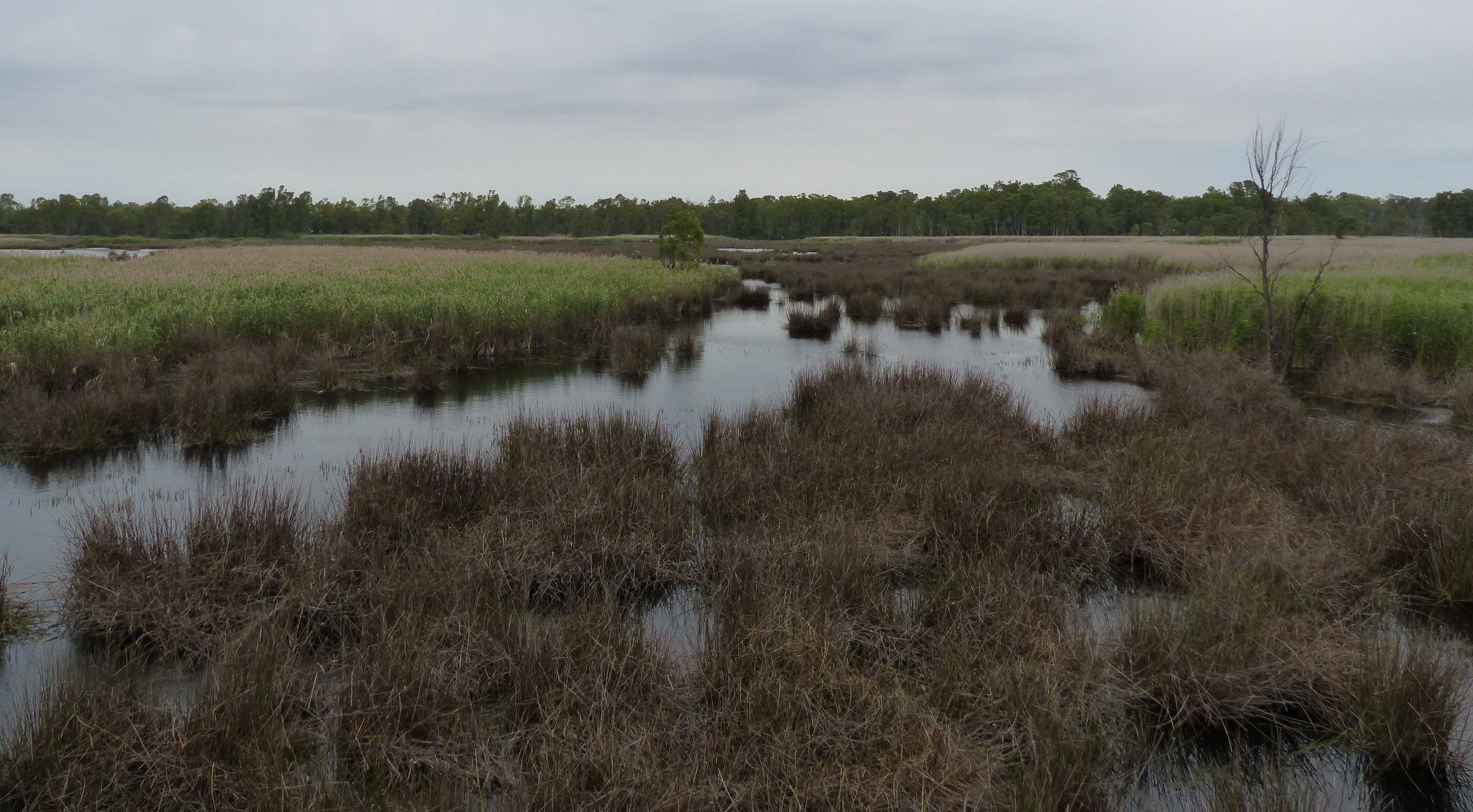 Egg and chick survival and mortality

Motion-sensing and time-lapse cameras set up on nests of Australian white ibis, straw-necked ibis and royal spoonbills collected data on egg and chick survival and mortality.

Egg hatching rates are low and vary between species

Most egg mortality is driven by predation or nest abandonment

Most predation events in Barmah-Millewa Forest are in daylight by native bird species, such as purple swamp hen (Porphyrio porphyria), Australian raven (Corvus coronoides), swamp harrier (Circus approximans), whistling kite (Haliastur sphenurus) and white-bellied sea eagle (Haliaeetus leucogaster). Anecdotally, predation by feral animals such as pigs, foxes and cats is more of a problem in other breeding sites like the Macquarie Marshes.

Chick survival rates in the nest are high

Once hatched, chick survival rates until leaving the nest are generally high and similar among the three species (88-92%). Future analyses will explore how nest exposure, parental behaviour and disturbance affect both egg and chick survival and mortality. 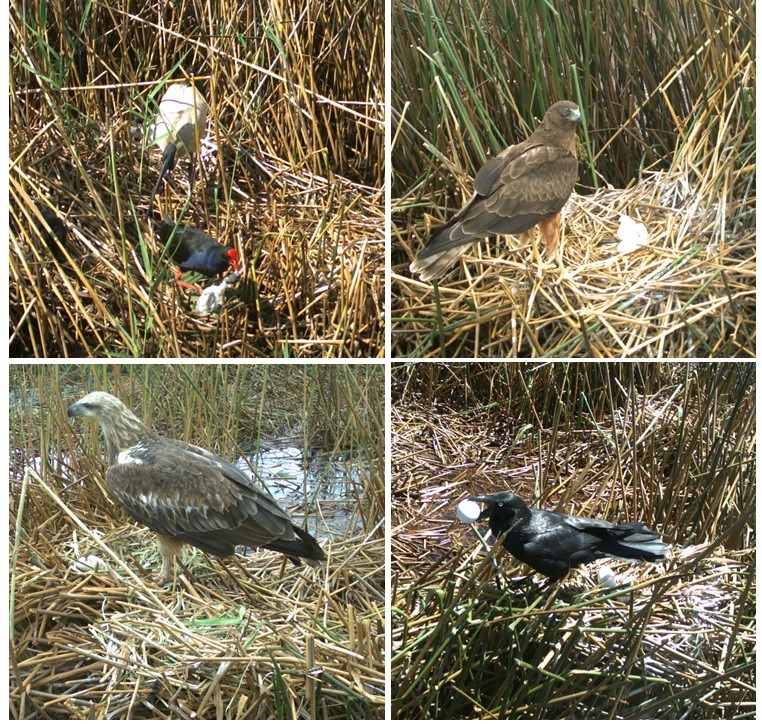