Of the twenty straw-necked ibis fitted with satellite transmitters in spring 2016/summer 2017, two adults remain active. Three of the ten adults are missing and the remainder are deceased.  Six of the ten juveniles were deceased within a few months of leaving their natal site and four are missing (of which at least one is presumed alive).

Confirmed and suspected causes of death include predation, vehicle impact, disease (botulism), weather extremes, starvation, poisoning and shooting. Determining the precise cause of death is difficult because multiple factors may interact to eventually result in death and because of rapid rates of scavenging and decomposition.

What are the expected ibis mortality rates?

Ecological theory predicts that juvenile mortality rates will exceed those of adults, however expected mortality rates in juvenile and adult ibis populations are difficult to establish due to lack of data. Mortality rates are usually only quantified for eggs and chicks in the nest – not young birds that have left the nest or adults such as those tracked in this project.  In particular, mortality rates for first year straw-necked ibis have never been quantified.

While many Australian white ibis (Threskiornis molucca) have been fitted with identifying leg bands over the past six decades, recovery and resighting rates are extremely low for adults, and even more so for young birds; most birds are never seen again. Limited information is available for leg-banded juvenile Australian white ibis, who have moved into urban areas to take advantage of abundant resources, with an estimated mortality rate of 50% for the 0-1 age class based on public recoveries of dead birds (Smith et al. 2013). We consider that if mortality rates of 50% exist for a highly adaptable species resident in relatively stable urban environments with abundant resources, mortality rates should be expected to be significantly higher for less adaptable species in non-urban environments undergoing significant change, with limited resources, higher rates of movement and higher exposure to a range of threats and stressors including predation, disease, weather extremes, parasites, poisoning and shooting.

Was the mortality rate in our sampled straw-necked ibis population influenced or increased by use of transmitters?

It is unlikely that the high mortality rate in this population was influenced or increased by the use of transmitters. The methods and transmitters have been used previously without issue on similar species (Australian white ibis) and the transmitter weights were of appropriate percentages of the ibis weights (1-4%). Discussions with the transmitter manufacturers confirm that this mortality rate is unusual using these techniques.

Several factors were confirmed or suspected to be drivers of observations and results during the 2016-2017 year, including:

Predators known to prey on ibis include swamp harriers, white-bellied sea-eagles and other birds of prey, Australian ravens and other corvids, foxes, dogs, cats, and pigs. Humans also shoot and poison ibis. Predation rates for juvenile and adult ibis are unknown, however it was anticipated that predation rates would be high for juveniles and would decline with increasing ibis age and experience.

Diseases, such as botulism

At least two of the tracked adults succumbed to botulism, based on evidence at the sites at which they were found, including the fact that many other waterbirds were also found deceased in the immediate area. Botulism symptoms were observed in waterbirds at both of the sites where ibis were captured for tracking during the 2016-17 season. The wet conditions in winter-spring 2016 combined with unusually warm temperatures were ideal precursors for botulism events across the Murray-Darling Basin and beyond, with additional reports of waterbird deaths in spring and summer 2016 in many areas in which the tracked birds were foraging.

At least one of the tracked juveniles was hit by a car. Waterbird deaths following being hit by vehicles are more common than one might expect. For example, two of fourteen recoveries of banded young cattle egrets studied by McKilligan et al. (1993) were hit by cars, two were electrocuted, and two collided with power poles.

Parasites such as ticks and lice can reduce chick survival, and potentially also transmit viruses. They are particularly problematic in breeding colonies where many juveniles and adults are living in close proximity to one another. Several of the juvenile birds handled and/or fitted with trackers in the 2016-17 season were carrying noticeable loads of lice and ticks.

It is likely that competition for resources and subsequent starvation is heightened in years such as the 2016-17 season when large numbers of juveniles leave their natal sites within three months of each other and their parents – for example, an estimated (conservative) total of approximately 150,000 straw-necked ibis pairs bred in the Murray-Darling Basin in the 2016-17 season across several sites.

Where waterbirds are consuming stock feed, crops or other resources, or are thought to be carriers of disease or parasites, they may be shot either as individuals or in large numbers, legally or illegally. Occasionally recreational hunters also shoot species that are not legal by mistake, including ibis.

Satellite tracking data so far has shown straw-necked ibis spend most of their time foraging on agricultural land, including grazing land, irrigated crops, and dry land crops and orchards. Straw-necked ibis are well known for targeting plague locusts as a food source. Adult ibis may gorge-feed on poisoned locusts and may feed locusts to their chicks in nesting colonies. Ibis may also eat baits set out for pest species (e.g. rodents, birds, rabbits) or may consume other poisoned pests such as mice. It is likely that this ibis species in particular, regularly ingests chemicals used for pest control- however the potential toxicity effects are unstudied and unknown.

What have we learnt so far?

This project is the first to document mortality rates and drivers in juvenile and adult straw-necked ibis. It is adding to a growing body of evidence that suggests that a potential bottleneck in population growth for Australian ibis species is juvenile mortality after leaving the nesting site. This evidence includes:

What you can do to assist

We greatly appreciate any help from the public in determining what has happened to our birds and satellite transmitters. Recovered transmitters are useful to us even if damaged, as they can be fixed and redeployed on new birds.

If you suspect you’ve come across one of our deceased birds (coloured leg bands visible) or transmitters please contact the Theme Coordinator, Heather McGinness on 0428124689. It would be much appreciated if you could record the location, date and time, and if possible take photographs of the location and birds. If you find a deceased bird or tracker, you can post the tracker at CSIRO’s expense to Heather McGinness, CSIRO, GPO Box 1700 Canberra ACT 2601.

Be aware that sometimes the transmitter may be in a tree or a hollow log. Other birds and scavengers find them interesting… 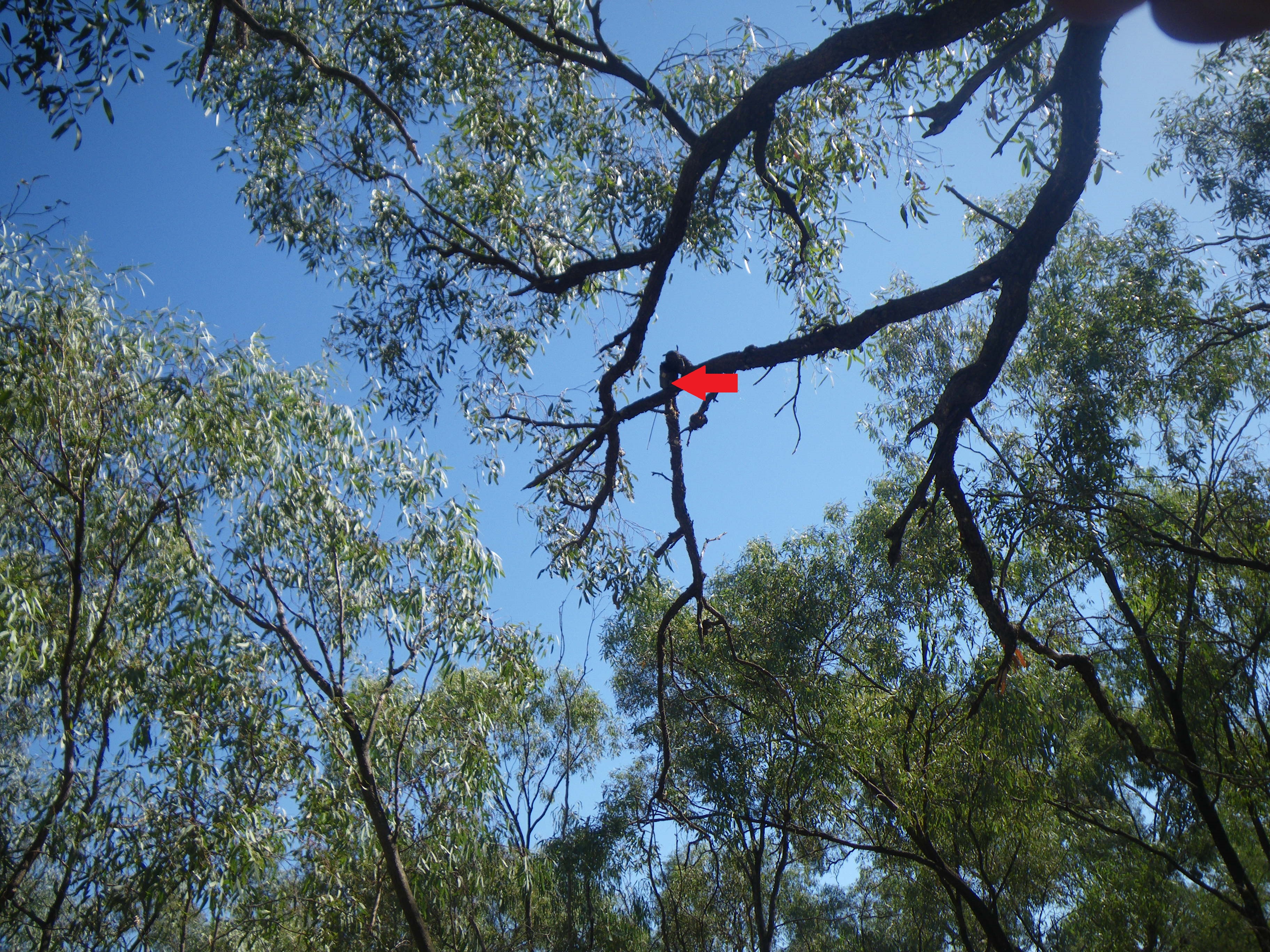 After finding the leg bands of a deceased bird, we undertook an extensive search for its missing satellite tracker, on a property near Hillston, NSW. On a second trip the tracker was finally found… but not on the ground as expected. Only after noticing playful juvenile butcherbirds hanging around a certain tree branch, did we realise the tracker had been above our heads the entire time, stashed in the branch fork by the inquisitive butcherbirds! Image: Heather McGinness.