We have monitored nests in Barmah-Millewa Forest over three breeding seasons. Barmah-Millewa is an important waterbird breeding site on the Murray River and also a Ramsar listed wetland. During each breeding season we set up motion-sensing and time-lapse cameras at the nests of Australian white ibis, straw-necked ibis and royal spoonbills. Our cameras monitored nests from the egg stage through to the time juvenile birds began to leave.

During the 2016-2017 and 2017-2018 breeding seasons we used three different camera types to capture activities at the nest, including new solar-powered ‘Swift’ cameras which transmit live still images via the phone network. This meant we were monitoring the daily going-ons and development of chicks throughout the nesting season in real time.

To date we have monitored a total of 412 nests by camera in Barmah-Millewa Forest, including 248 Australian white ibis nests, 90 straw-necked ibis nests and 74 royal spoonbill nests. We have processed millions of camera images, and so far our analysis of the camera images has provided us with preliminary recruitment data, as well as giving us new insights into the nesting behaviours of these species. 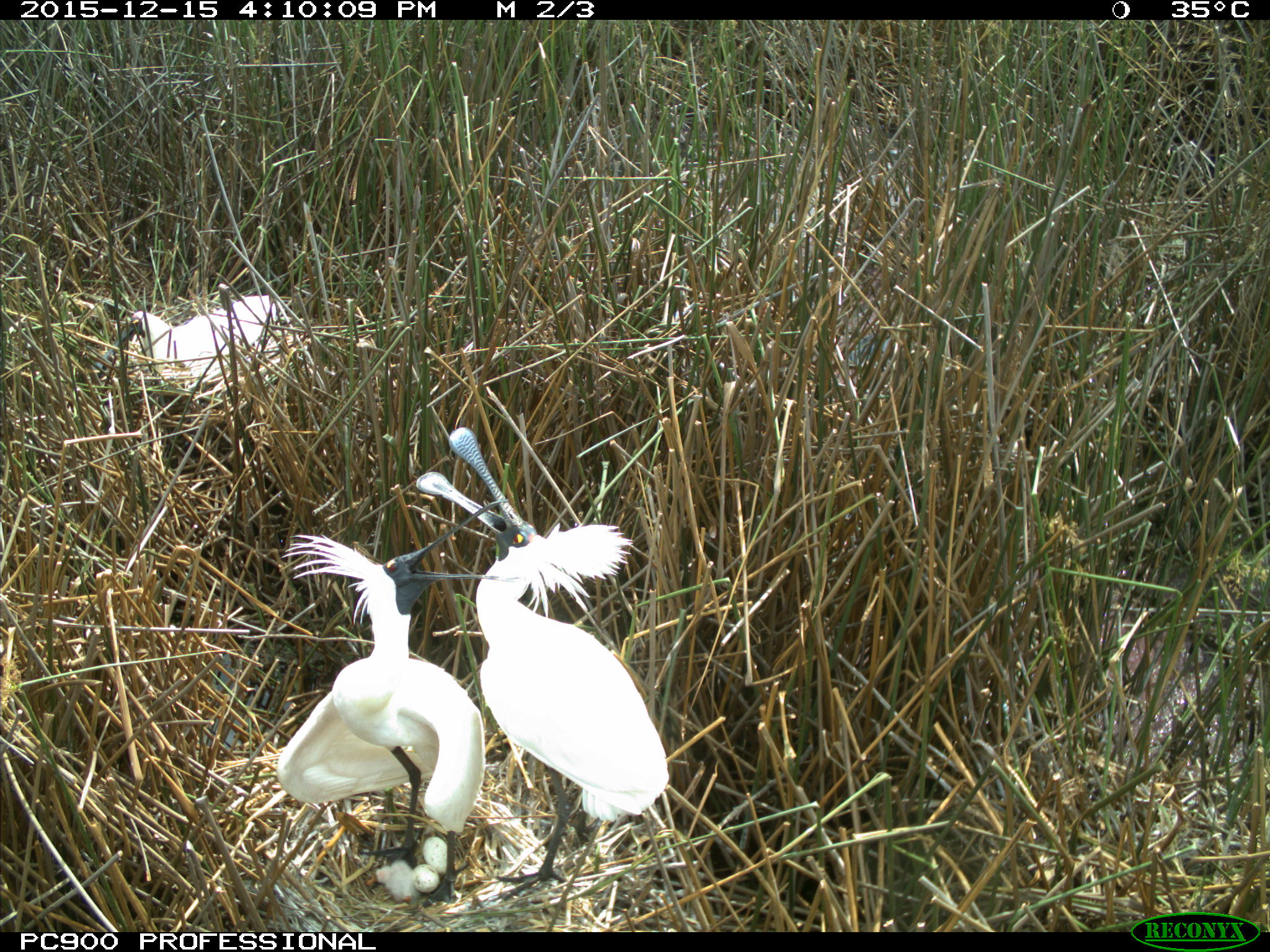 A motion-sensing image captured by one of our cameras set up on a royal spoonbill nest at the Barmah-Millewa Forest during the summer 2015-2016 pilot study. The two parents protect their nest containing a newly hatched chick. Image credit: CSIRO 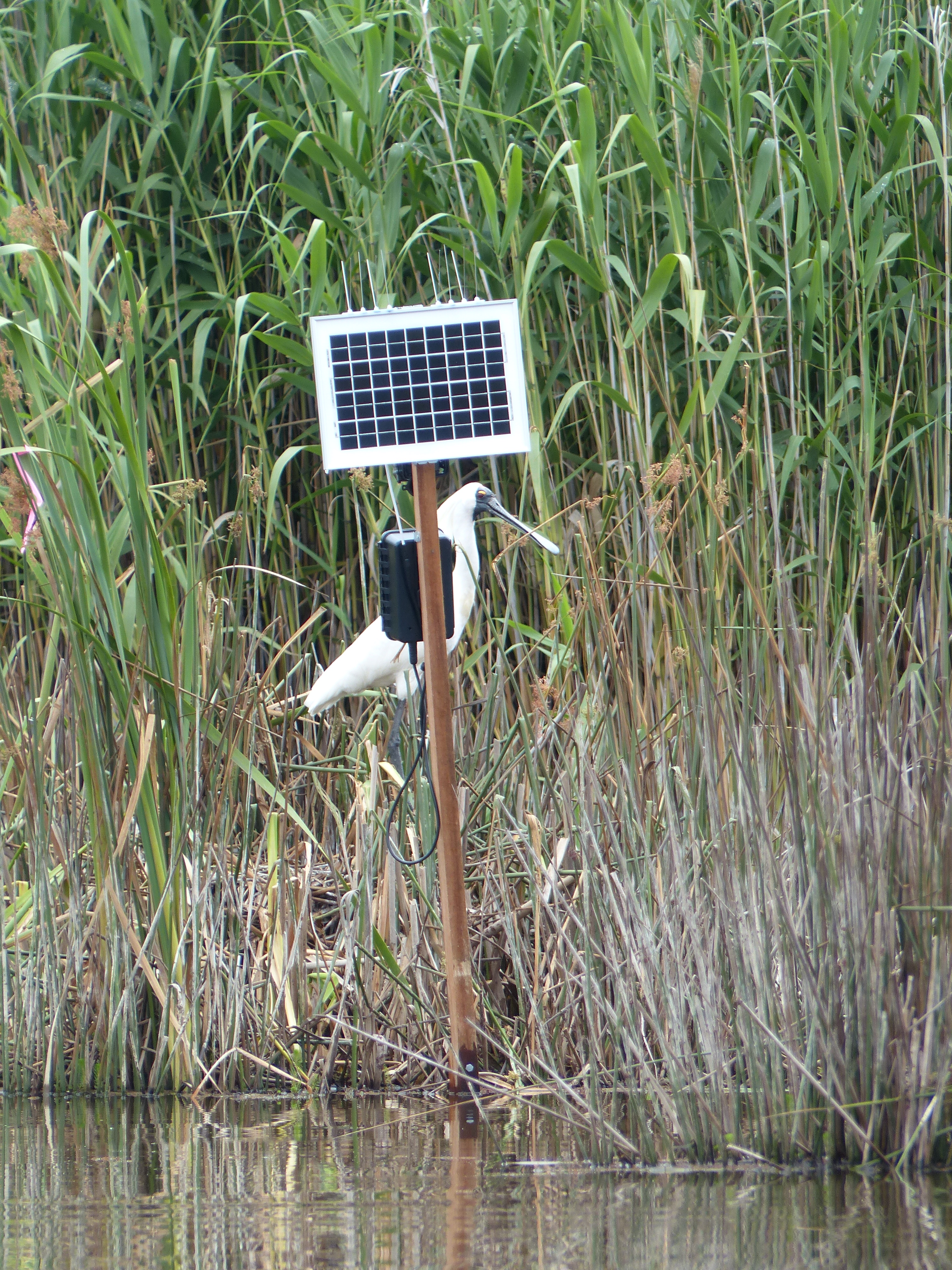 ABOVE: A solar-powered ‘Swift’ camera set up on a royal spoonbill nest in Barmah-Millewa Forest. Image credit: Heather McGinness 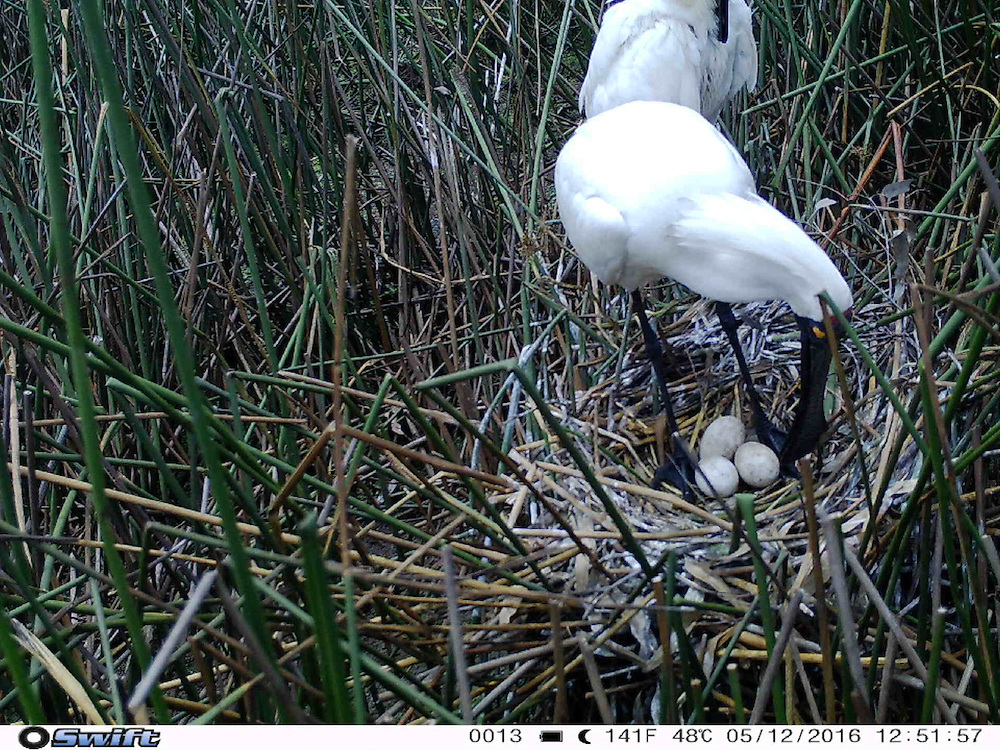 ABOVE: Royal spoonbill parents tend to their eggs. Image captured by a ‘Swift’ camera on 5 December 2016. Image credit: CSIRO 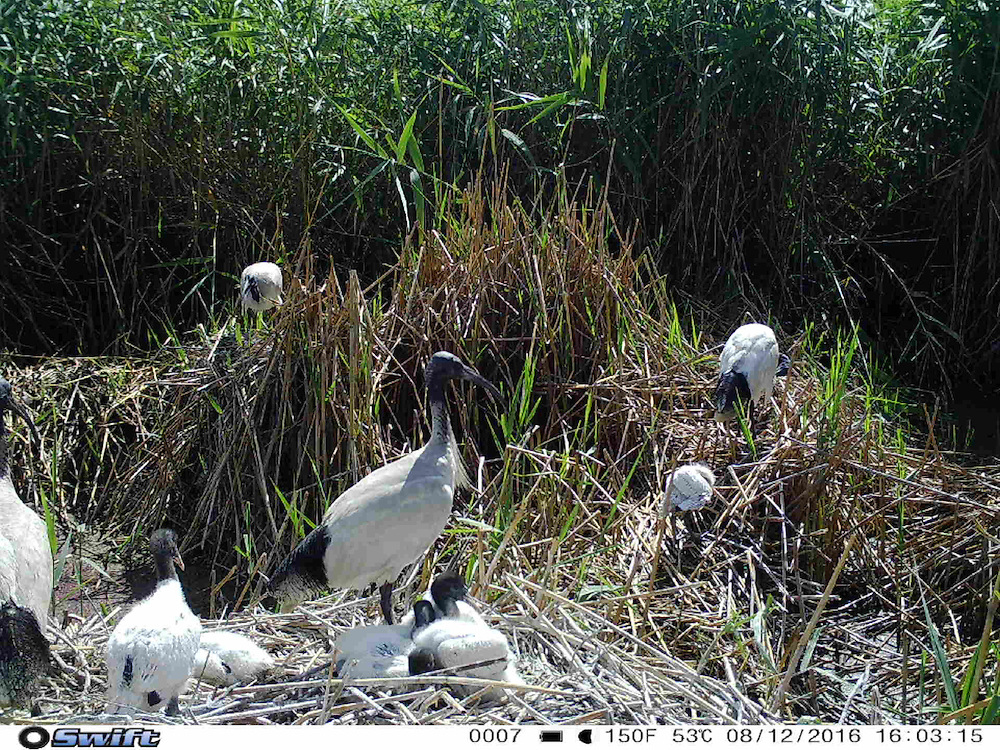 ABOVE: An Australian white ibis nest clump. Five chicks of varying age can be seen in the foreground. Image captured by a ‘Swift’ camera on 8 December 2016. Image credit: CSIRO

Together with researchers from UNSW and RBGSyd (Royal Botanic Gardens Sydney) we deployed a total of 28 Geotrak satellite GPS trackers in Barmah-Millewa on juvenile and adult straw-necked ibis, Australian white ibis and royal spoonbill. This is the largest number of spoonbills and ibis tracked in a single study within Australia to date!

The trackers provided us with bird movements during and after the breeding season; showing where adults were foraging for food for their chicks and unveiling common paths of juvenile dispersal after leaving the nest site.

The trackers capture GPS locations hourly from 7am-7pm and at midnight each day to record the roosting and nesting locations of the birds. The trackers are solar-powered and expected to last 2-5 years. So far our tracked birds have provided valuable information on foraging locations and insight into big questions like where do birds go after breeding and how far do they travel? and do these birds return to the same spot to breed? 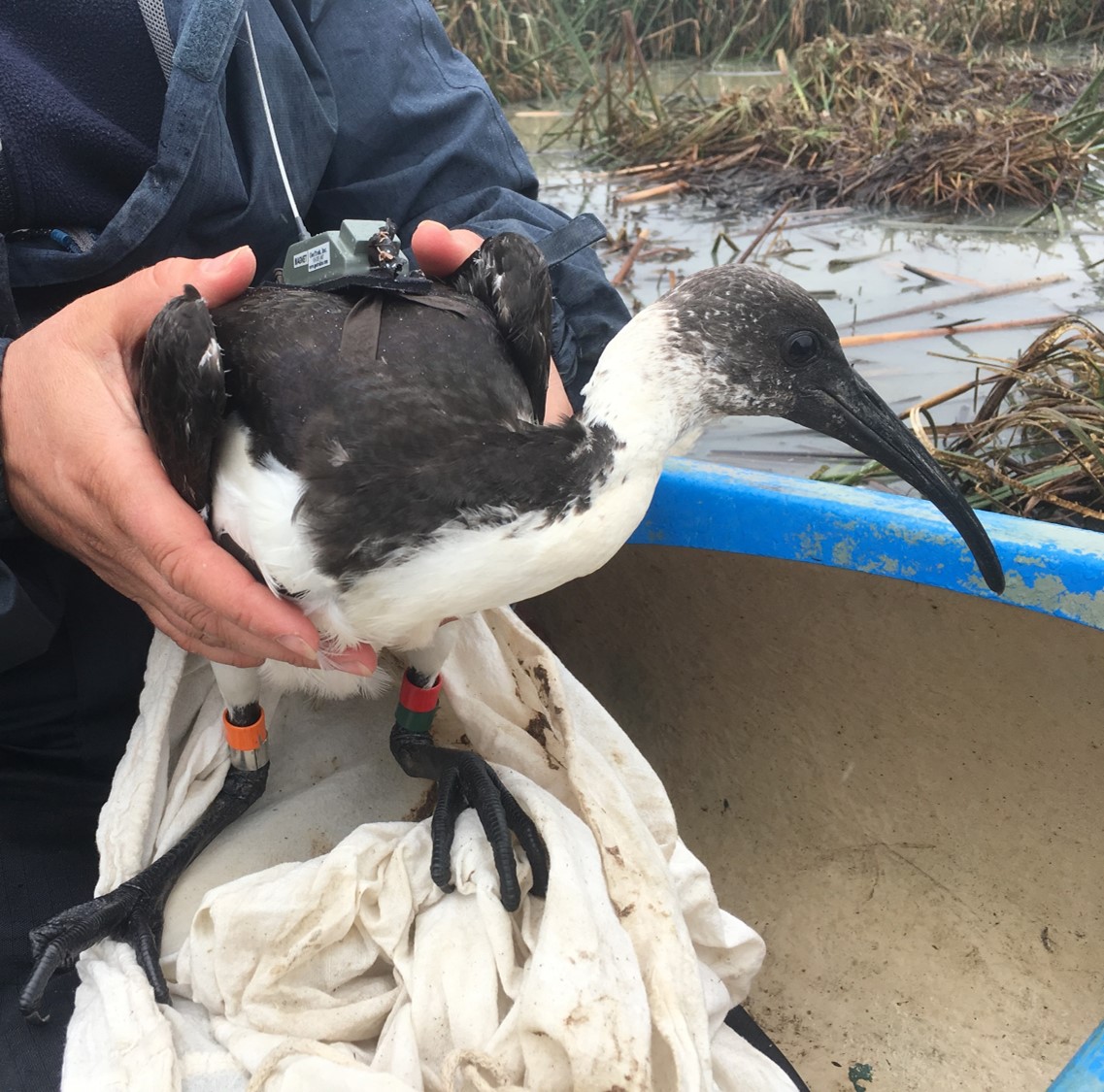 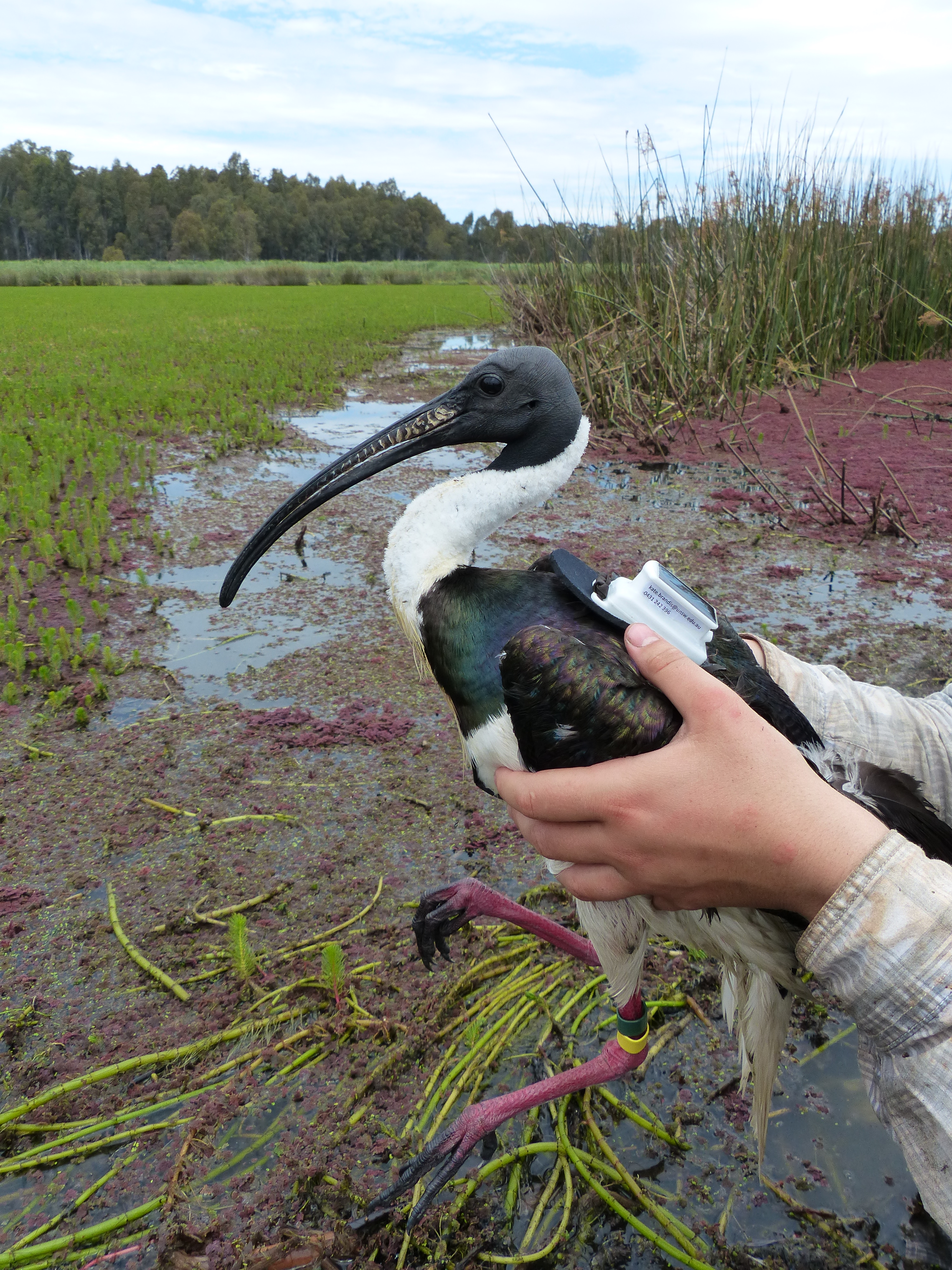 During the 2020-2021 breeding season trackers were deployed on 12 juvenile royal spoonbills and one adult white ibis. 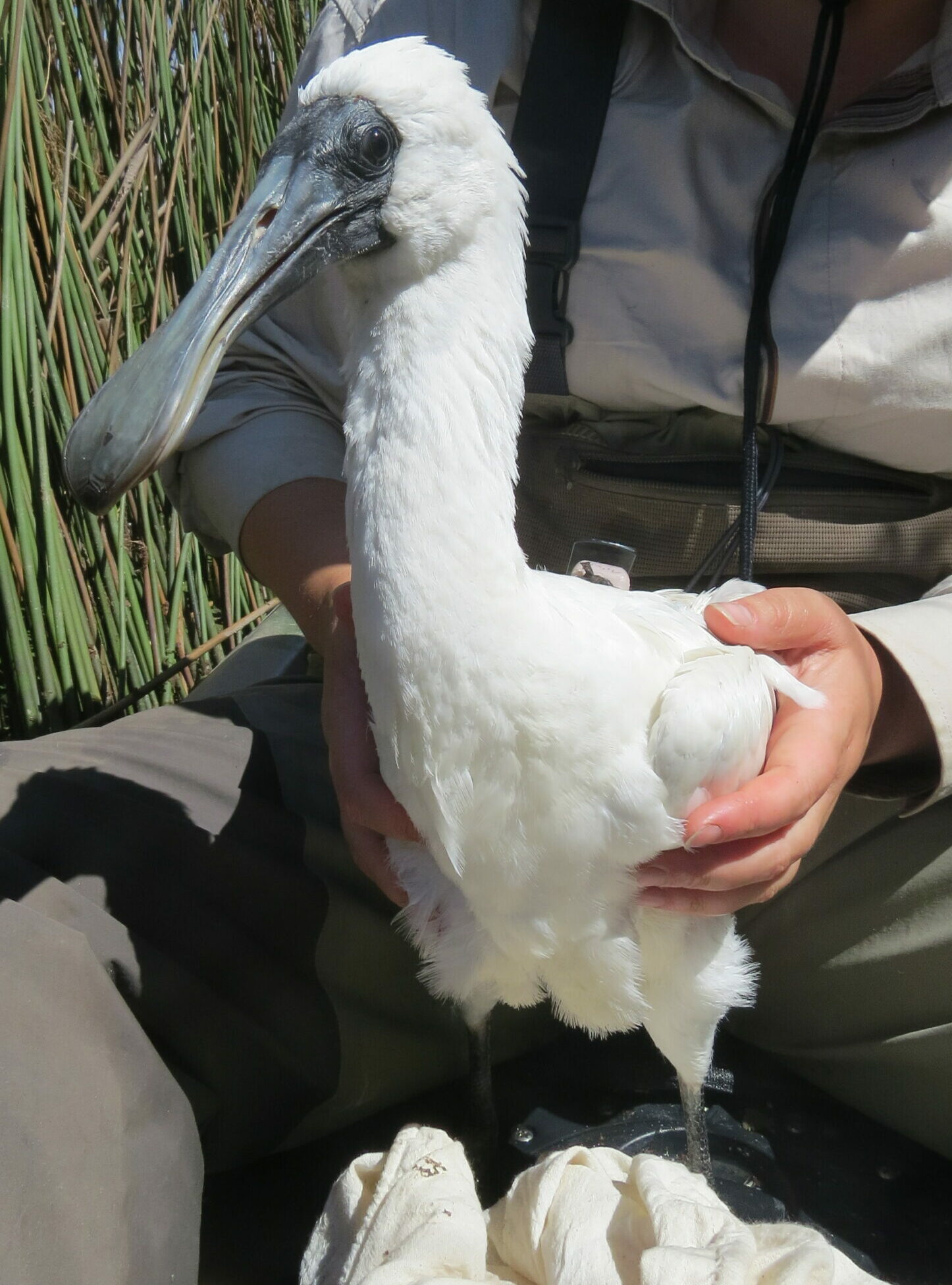 A juvenile royal spoonbill fitted with a satellite tracker in February 2021. Image: CSIRO

Please report any sightings of banded birds or birds with transmitters to Heather McGinness: 0428124689 or the Australian Bird and Bat Banding Scheme (ABBBS) (02) 6274 2407 abbbs@environment.gov.au.

We’ve collected feathers, scats and regurgitates from our tracked birds and from various nests within the breeding colonies of Barmah-Millewa Forest. Scat and regurgitate samples provide insight into the diets and energy requirements of adult and juvenile birds, while feathers contain DNA which can be used for population genetics studies.

We are surveying foraging habitat and bird behaviour at sites where our tracked birds have spent significant time. We’re also surveying other sites within and around Barmah-Millewa Forest where ibis and spoonbills have been observed foraging.

Foraging birds have been monitored with telescopes and binoculars to gauge the number of food capture events and the type and size of the prey item. We’ve also been recording the characteristics of foraging habitat sites, such as dominant vegetation species, land use and extent of water inundation. 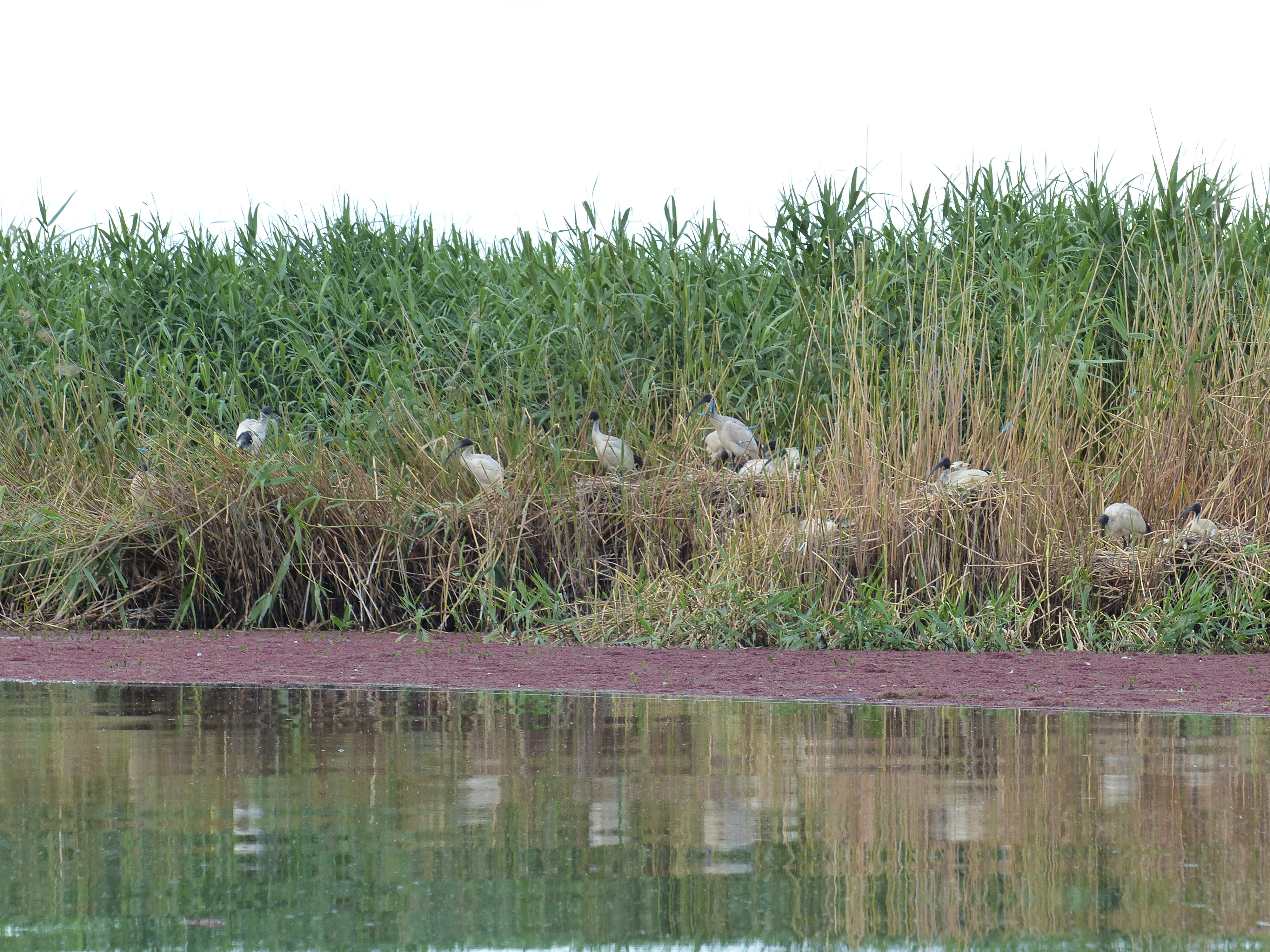