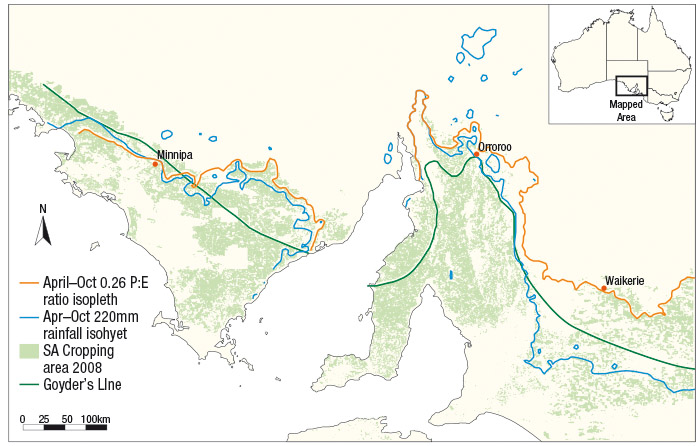 George Goyder established the margin between reliable and unreliable rainfall regions in South Australia 150 years ago. While current cropping systems have supported cropping north of the line, climate change could return the cropping margin back to this historic boundary.

The line (Figure 1, above) marked the noted transition between reliable cropping environments and those only suited to grazing – the nominal separation of farmland and pastoral country. Using vegetation as his indicator, Goyder’s task was to delineate the country where rainfall was reliable and where drought prevailed. Considering his limited resources he did a pretty good job and his line has remained a reference point ever since.

However, this transition zone is highly sensitive to any climate variation, especially rainfall, and has changed over time depending on the sequence of good and poor cropping seasons and technological advancements.

In recent years no-till farming practices have resulted in reliable cropping, even in difficult season, extending as far as 100 kilometres north of Goyder’s Line, especially in the Mallee.

With variability in cropping-season rainfall predicted to increase, Dr Uday Nidumolu and colleagues at CSIRO and the South Australian Research and Development Institute investigated whether a more reliable system of predicting the margin of the South Australian grainbelt was possible.

The team also modelled wheat yield for a range of selected locations, using the Agricultural Production Systems sIMulator (APSIM). It found that the strongest relationship across the majority of South Australia was to map the line at which the ratio between rainfall (P) during the growing season (April to October) and potential evaporation (E) equalled 0.26 (Figure 2), a figure also used by Reg French in his yield prediction equations developed at the Minnipa Research Station on the Eyre Peninsula, South Australia.

When extrapolated across Australia, the team was surprised to find the 0.26 P:E ratio fitted closely with much of the Australian grainbelt. Similarly, 220 millimetres of growing-season rainfall (April to October) also clearly fitted the margins, even in parts of the summer rainfall regions of Queensland. These results suggest that the drier margin of the Australian grainbelt may be a ‘hard edge’.

With a new margin based on the 0.26 P:E ratio, Dr Nidumolu and colleagues investigated how the position of the cropping margin might change in a drying and warming climate, or one that was becoming wetter.

The CSIRO Mk3.5 climate model simulates a reduction in future rainfall or a drier future over Australia. It predicts a 10 to 20 per cent reduction in growing-season rainfall over South Australia by 2030.

If the drying CSIRO’s Mk3.5 model climate change projections are correct, by 2050 the margin of cropping on Eyre Peninsula and parts of the Murray Mallee will be about 50 to 100km further south than the long-term mean P:E ratio boundary.

In most parts of SA that would take the margin back much closer to Goyder’s Line. However, Dr Nidumolu says it is important not to over-interpret this because it should be seen as a representation of the possible location of the 0.26 P:E margin under different climate change projections.

The distance that the cropping margin based on 0.26 P:E ratio moves depends on the landscape topography. Regions such as SA’s Eastern Fall and South Flinders coastal zone have strong gradients of topography, climate, soils, vegetation and crop production and ergo land values. At these sites there will likely be smaller changes in location of the 0.26 P:E margin.

However, most of the grainbelt on the Eyre Peninsula and the Murray Mallee is on an extensive plain with widely spaced margins of P:E. When climate change is measured in a southerly shift in kilometres per decade of the 0.26 P:E ratio isopleth, the fastest rate of change will be across relatively flat plains.

Such a change would have a significant impact on communities as well as on total grain production. For this reason, Dr Nidumolu says growers and government and industry agencies need to keep in mind the potential ramifications of such changes in the next 15 to 35 years.